Taken For A Ride?

The main consultants for Mecklenburg's light rail system are big, powerful companies. They also have a notorious history of scandal, massive cost overruns, engineering snafus and deceiving the public. 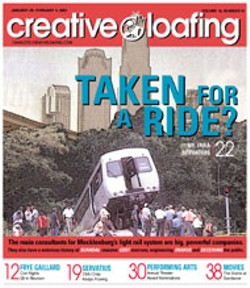 The last time two of the consultants overseeing Mecklenburg County's light rail and mass transit plan worked on a large-scale project together, they were responsible for an 80-foot sinkhole, thousands of lawsuits totaling over $1 billion, and a trail of fraud and corruption so long that even the FBI couldn't untangle it. Now they're advising Charlotte Area Transit Officials on our transit plan and helping to design it.

The two design, construction and engineering firms, Parsons Brinckerhoff Quade & Douglas, Parsons Transportation Corp., and their smaller business units are directly responsible for projects widely regarded as the biggest transit debacles in the nation's history. Both have stark histories of deceiving the public and government officials about the true costs of transit projects, and then benefiting directly from project cost overruns.

These histories are alarming enough to call into question every figure, fact and cost estimate ever given to the voters and elected officials of Charlotte-Mecklenburg by these companies. And it's enough to make one wonder why the Metropolitan Transit Commission and Charlotte City Council approved consultant contracts with them in the first place.

Boston's Notorious "Big Dig"
In 1998, before Parsons Brinckerhoff, Quade & Douglas prepared Charlotte-Mecklenburg's first transit plan for voter approval, the company, in a joint venture with another firm called Bechtel Civil Inc., oversaw the design and construction of Boston's Big Dig. The legendary project, a multi-billion dollar effort to bury 7.5 miles of Boston's central artery roadway underground, would eventually become the mother of all US transportation project fiascos. While the project was highly complex and didn't involve light rail like Charlotte-Mecklenburg's transit plan does, the fraud and cost overruns that have come to be associated with Big Dig have made national news -- and call into question the corporate practices of the company that to date has played a major guiding role in our own city's transit plan. In 1985, when Bechtel-Parsons Brinckerhoff was hired to oversee it, the project had an estimated cost of $2.6 billion and a completion date of 1998. Today, the project has a projected completion date of 2005, and its price tag has ballooned to $14.6 billion and climbing. And that doesn't even count the millions of dollars various state and federal agencies have spent on more than 15 separate investigations of the project's managers, which included Bechtel-Parsons Brinckerhoff, for shoddy design, construction and engineering, fraud and corruption.

"You do have to monitor them," Massachusetts Former Secretary of Transportation Frederick Salvucci told the Boston Globe about Bechtel-Parsons Brinckerhoff in September 1994. "But the most important role of your monitoring is to make sure that you're getting what you paid for, and yeah, you don't want them going crazy on costs. You need a lot of public employees to do that."

Three months later, a report released by Massachusetts State Inspector General Robert Cerasoli's office proved Salvucci right. The report blamed the state highway department and Bechtel-Parsons Brinckerhoff for cost overruns and systematic problems on the project. It also suggested that Bechtel-Parsons Brinckerhoff and another contractor attempted to cover up costly charges in several cases and presented incomplete and inaccurate information to project officials about the work.

It would be six more years before the truth about Big Dig would finally become widespread public knowledge. In 2000 -- the year our local transit officials and the Charlotte City Council awarded four contracts worth $2.6 million to Parsons Brinckerhoff for transit advisory services for CATS, the North and Northeast Corridor Major Investment studies, pedestrian controls along the South Corridor, and North Corridor rail assistance -- the company's reputation hit rock bottom in Boston.

Almost every month in 2000, there was one shocking revelation or another about Big Dig.

It started with a report released by State Auditor Joseph DeNucci in February of that year which concluded that, because of failures by Bechtel-Parsons, at least $19 million was wasted on useless design work in the Fort Point Channel section of the project because the company ignored concerns about unusually soft soils in the area. Had DeNucci's earlier warnings to transit officials to take cost control responsibilities away from Bechtel-Parsons been heeded, things might have turned out differently. Instead, DeNucci went on to make a career of sniping at the Bechtel-Parsons and transit officials. In 11 other reports, he documented $446 million in additional waste on the project because cost-reduction methods weren't applied.