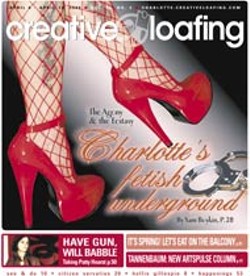 While Mistress Sapphire says she wishes she and her family were closer, she has no regrets about the life she's chosen. "This feels natural to me," she says. "I've tried to wear polo shirts and khakis and it was just like...what am I doing? I like entering a room as this larger than life character wearing vinyl with floggers and whips. I wish my parents were more open-minded, but Jehovah's Witnesses is very cult-like. Ironically, that's just what they think about me."

Just A Couple Next Door

Tucked away on a quiet cul-de-sac in east Charlotte lives a young couple. When I arrive at their home they're just finishing dinner, and it's the picture of domestic normalcy. Lots of ceramic unicorns are on display, a couple of movie posters adorn the wall, and two lazy cats snooze on the couch. However, all is not as it seems. I'm led upstairs to the couple's "playroom," where soft, red lights illuminate about a dozen whips and floggers hanging on the wall, each costing about $150 or more. The futon set against the wall doubles as a "spanking bench," I'm told. And I notice a dangerous looking pair of black stiletto heels near the closet. This is the lair of Mistress Genevieve, a professional in the financial field by day, and dominatrix by night.

She was also getting over a bad relationship. "What I had been doing up till then wasn't working," she says. "The guy I was engaged to ended up dumping me on Valentine's Day for his best friend's ex-wife. With him it had been like a traditional marriage. He'd come home from work and plop down on the couch, and I cooked dinner. I did all the things the 'good little wife' was supposed to, and it didn't work. So I was looking for something different. It's not that I'm a man hater, but I don't have the right personality for that kind of relationship. I like being in control. I like being dominant."

"My clients are primarily looking for a vacation for the mind," says Mistress Genevieve. "A lot of them have very stressful careers. When they come to the dungeon they don't have to think, they don't have to make a single decision. All they have to do is lay there, do what I say, and be told what scum they are. There's no sexual contact. I'm not a prostitute. It's more about them being free and letting go."