The Avengers, The Cabin in the Woods, Halloween sequels among new home entertainment titles | View from the Couch | Creative Loafing Charlotte
Switch to the mobile version of this page.

The Avengers, The Cabin in the Woods, Halloween sequels among new home entertainment titles 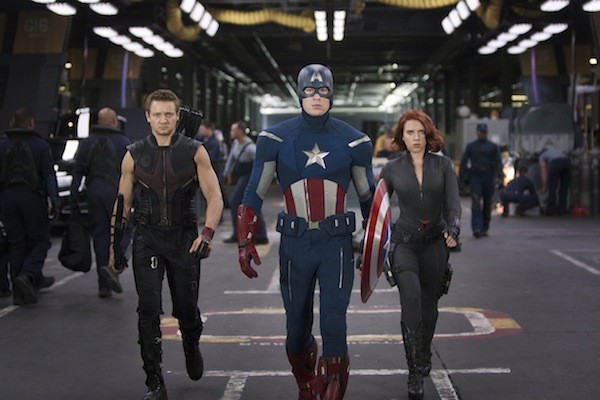 THE AVENGERS (2012). The Avengers is, quite simply, a brainy and brawny blast. It's a culmination of numerous super-sagas that have been building toward this moment, and it manages to trump every last one of them. In this instance at least, too many cooks have not spoiled the broth, as writer-director Joss Whedon and co-writer Zak Penn take care to insure that every character has his or her moment to shine. The plot finds Thor's evil half-brother Loki (Tom Hiddleston) conspiring to get his hands on the Tesseract, a cosmic cube that will grant him unlimited power. Nick Fury (Samuel L. Jackson), head of the law-enforcement outfit S.H.I.E.L.D., realizes that it's going to take more than one hero to prevent the subjugation of our planet's people, so he sets about getting in touch with all pertinent parties: Tony Stark/Iron Man (Robert Downey Jr.), Steve Rogers/Captain America (Chris Evans), Thor (Chris Hemsworth), Bruce Banner/Hulk (Mark Ruffalo), Natasha Romanoff/Black Widow (Scarlett Johansson) and Clint Barton/Hawkeye (Jeremy Renner). Admittedly, it takes time for Whedon and Penn to lay out the exposition — in fact, too much time, considering the Tesseract almost functions as a Hitchcockian MacGuffin, a plot device that holds dwindling interest for audience members. But once Whedon gets the film up to speed, he never looks back. The midsection is the best part, as the heroes spend more time battling each other than assessing the situation regarding Loki. It's putting it mildly to state that this is a veritable clash of the titans, with oversized personalities rubbing each other raw. As expected, Downey provides the bulk of the humor while Evans and Hemsworth provide the bulk of the beef. Johansson, a bit shaky in Iron Man 2, nicely comes into her own here, providing some softer moments to go along with the expected athleticism. Yet the surprising scene-stealer is Ruffalo, who provides Bruce Banner with a stirring soulfulness that was missing in the portrayals by Eric Bana and, to a lesser extent, Edward Norton. What's more, by employing the motion-capture technique rather than straight-up CGI, this is the first film to absolutely nail the Hulk, who in 2002 laughably looked like a video blip version of Gumby and in 2008 seemed shellacked in green plastic. 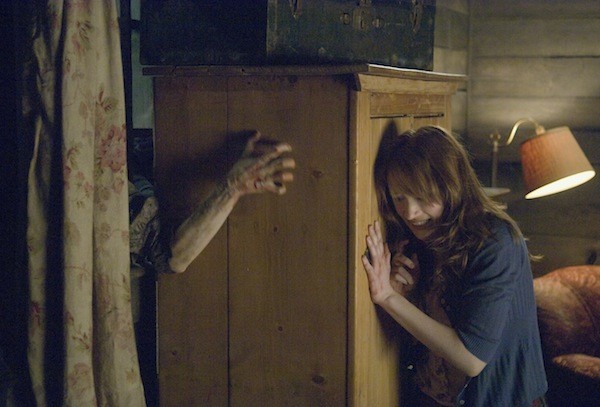 THE CABIN IN THE WOODS (2012). Stop me if you've heard this one before. Five college kids head to a cabin in the middle of nowhere, hoping for some r&r. Instead, something evil starts picking them off one by one... Unless you've spent your own existence in a cabin in the middle of nowhere, there's no way not to be knowledgeable of this setup, which has powered many a horror flick for approximately four decades and counting. But it's guaranteed that you haven't seen anything quite like The Cabin in the Woods, which uses its ordinary, even boring, title to lull us into a false sense of familiarity. In short, this effort from writer-director Drew Goddard and co-scripter Joss Whedon (a busy year; see The Avengers above) is no cut-rate slasher flick like Friday the 13th or Cabin Fever. This is a particularly difficult film to cover since the less a potential viewer knows, the better — I daresay even the relatively spoiler-free trailer (and even the Blu-ray box art!) reveals a bit more than what's desirable. So let's just establish what we can ascertain from the movie's opening act. Five likable students — the sweet Dana (Kristen Connolly), the vivacious Jules (Anna Hutchison), the hunky Curt (Chris "Thor" Hemsworth), the quiet Holden (Jesse Williams) and the perpetually stoned Marty (Fran Kranz) — leave the city and head toward the remote cottage owned by Curt's cousin. Meanwhile, Sitterson (Richard Jenkins) and Hadley (Bradley Whitford), two men who work in what appears to be a science facility, prattle on about the accident of 1998 and take sizable bets from co-workers. Not enough intel? Sorry, that's all you get here. But rest assured that these two plot strands will eventually find each other. When they do, the film falls into what I believed to be a reversal of misfortune, settling into standard fare with the cynicism elevated to an uncomfortable degree. Silly, shortsighted me. The Cabin in the Woods soon bursts loose from this holding pattern, growing ever more outrageous and entertaining as it barrels toward its take-no-prisoners climax and conclusion. To reveal anything more about this film would be criminal. But did I mention that the happy frog made me laugh out loud?

Blu-ray extras include audio commentary by Whedon and Goddard; the BonusView mode (i.e. picture-in-picture) mode; a making-of featurette; and two pieces on the effects. 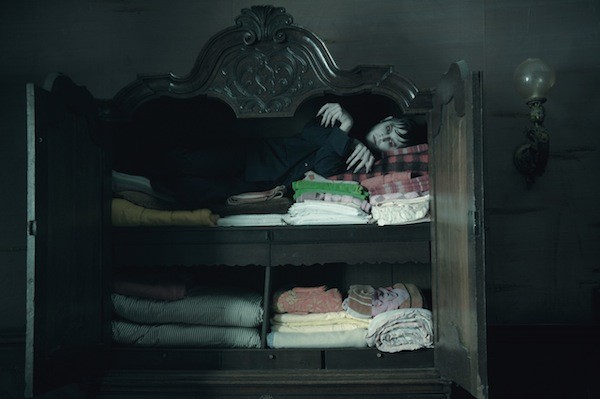 DARK SHADOWS (2012). The TV soap opera Dark Shadows (1966-1971) was popular thanks to the character of Barnabas Collins, a dapper vampire played by Jonathan Frid. Frid (who passed away earlier this year) wasn't a particularly handsome actor, but such is the seductive allure of suave, well-spoken vampires that they tend to break down resistance across all lines. Still, it's hard to imagine anybody save maybe the most extreme Johnny Depp groupies going all aflutter over the new Barnabas Collins in Tim Burton's Dark Shadows. How is it possible that a man who just a few years ago stood as one of our most exciting and unconventional actors has now become one of the most predictable, to the point where he threatens to become a parody of himself? A fairly faithful take on the vintage show, the movie features the best production values a studio's money — and Burton's vision — can buy. This is no surprise: Rick Heinrichs won his Oscar for his brilliant set design on Burton's Sleepy Hollow, while Colleen Atwood won one of hers for her elaborate costumes for Burton's Alice in Wonderland. Heinrichs and Atwood are also employed here, and both might be adding to their cabinets of industry accolades. But it used to be that a Tim Burton production offered much more than surface pleasures. Penned by frequent Burton collaborator John August and Seth Grahame-Smith, the author of Pride and Prejudice and Zombies and Abraham Lincoln: Vampire Hunter, this version does hum along nicely for a good while, but it becomes increasingly more diffuse, and it ends with a dreary FX blowout that shares nothing in common with the modest source material. Dark Shadows marks the eighth collaboration between Burton and Depp, and it's quite possible that — to borrow the name of another long-ago TV show — eight is enough.

HALLOWEEN II (1981) / HALLOWEEN III: SEASON OF THE WITCH (1982). Maybe it's because I didn't see John Carpenter's 1978 Halloween until a few years after its initial release, at which time I had already sat through Friday the 13th, My Bloody Valentine, Happy Birthday to Me and countless other slasher flicks from the early 1980s, but it's never held me in its grip the way it's done to countless other viewers. Where others see a genuine classic — one that stands on equal footing with Psycho, if Roger Ebert is to be believed — I only see a competent but standard horror yarn most notable for Carpenter's superb music score and Jamie Lee Curtis' film debut. 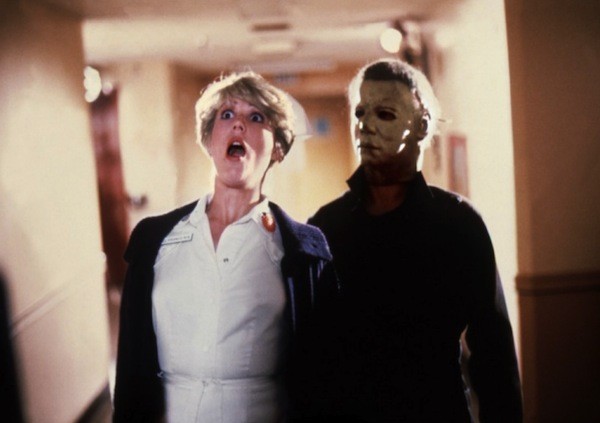 So the mile-wide chasm that fans believe separates the acclaimed original from the largely panned Halloween II registers as only a foot-wide crack to me. Picking up immediately where the first film left off — with twitchy Dr. Loomis (the great Donald Pleasence) saving teenager Laurie Strode (Curtis) from the masked killer Michael Myers — this one moves much of the action to the local hospital, inconveniently located on the outskirts of town. While Laurie is treated by the medical staff there, Dr. Loomis remains in town, continuing his search for the elusive Michael. But the soulless agent of evil has already managed to make his way to the hospital, where he bloodily dispatches everyone in sight as he tries to once again get to Laurie. The script by Carpenter and Debra Hill (who also co-wrote the original) is fairly routine and Curtis has too little to do this time around, but the hospital setting proves to be a sound choice for a locale, and director Rick Rosenthal and director of photography Dean Cundey do what they can to create a pervasive mood of dread (the more gory sequences were reportedly added at a later date by Carpenter, against Rosenthal's wishes). 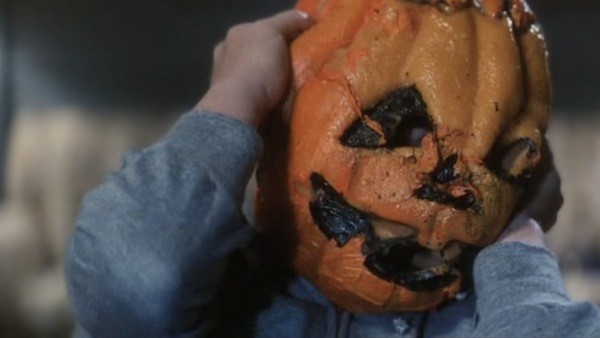 After Halloween II, Carpenter and company decided to make a series of Halloween films that each told a different story, none involving Michael Myers. Unfortunately, Halloween III: Season of the Witch was such a commercial and critical bust that the idea was scrapped and Myers returned for the next installment (called, naturally, Halloween 4: The Return of Michael Myers); we've been stuck with damn sequels, spin-offs and rip-offs ever since. Too bad, since Halloween III, while not a complete success, at least offers something different from the norm. The fanciful story was conceived by renowned British writer Nigel Kneale, who was so offended by the violence and gore that director Tommy Lee Wallace added to his script that he had his name removed from the project. The plot concerns the efforts of a toy manufacturer (Dan O'Herlihy) to use his company's best-selling Halloween masks in a diabolical scheme that would wipe out scores of children across the country on All Hallows' Eve. As the only two people who know about his plan, Tom Atkins and Stacey Nelkin make for dull, one-dimensional heroes, but some of the set-pieces — the opening chase, the Kupfer family's mishap, and more — deliver the goods.

The second disc in the Blu-ray 2-Disc Collector's Edition of Halloween II is actually a DVD containing the network TV version of the film, with added footage (and, of course, the more R-rated moments from the theatrical version excised). Extras on the Blu-ray include audio commentary by Rosenthal and supporting player Leo Rossi (who plays the smarmiest of Myers' victims); separate audio commentary by actor/stunt coordinator Dick Warlock (who plays Myers); a making-of feature; deleted scenes; an alternate ending that's preferable to the one actually used; and a look at the film's shooting locations. Blu-ray extras on Halloween III: Season of the Witch include audio commentary by Wallace; separate audio commentary by Atkins; a making-of feature; and a look at the film's shooting locations.

Tags: View from the Couch, DVD, Blu-ray, review, The Avengers, The Cabin in the Woods, Dark Shadows, Halloween II, Halloween III: Season of the Witch