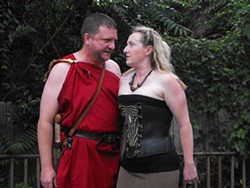 There is more than enough malice and carnage in Titus Andronicus for a few worshipers of Shakespeare to seriously doubt he wrote it. Since the object of their bardolatry is universally acknowledged to have fashioned the atrocities of King Lear and the body count of Hamlet, we must be considering a degree of brutality and barbarity that is quite formidable. Historically, the bloodletting has been enough to dissuade companies and directors from producing Titus — and enough to dissuade mothers and small children from watching.

Yes, even for Shakespeare, this apocryphal tale of bloodlust and revenge during the Roman Empire is over-the-top in its violence. So let me pass along a couple of facts about the Citizens of the Universe production, currently running in the rear patio at Snug Harbor, before passing judgment on its merits.

• Scenes of graphic violence are sufficiently bloody to warrant a "splash zone" encompassing the audience seats closest to the main staging area.

• When my wife Sue and I attended last Wednesday, the most violent scenes invariably elicited laughter from a good portion of the crowd.

COTU has never been intimidated by the fact that live onstage special effects usually pale in comparison with the horrors achieved by Hollywood goremeisters. Cheesy or not, the gross-out episodes of Titus will no doubt land it a place alongside the company's guerilla presentations of Trainspotting and Reservoir Dogs in local lore. Each of these dramas has come burdened with daunting technical challenges and bodily spewings, but the live lopping of limbs required by this Shakespeare tragedy is likely unprecedented in Charlotte's annals.

So the enmity between Titus and Tamora, both of whom come equipped with still more spare children, could hardly be more extreme. When Saturninus takes Tamora to be his empress — a brief betrothal with Titus' daughter Lavinia just doesn't work out — the spigots of vengeance and vendetta are opened full blast. Rape is merely the beginning of the violation inflicted upon Lavinia, and the vengeance Titus takes on Tamora's remaining two sons plumbs the depths of ghoulish gourmet horror.

Reminiscent of COTU's previous outdoor venture in Plaza Midwood, the legendary Fight Club of 2009, actors dealt admirably with the vagaries of the weather, this time a drizzle rather than a downpour. Tom Ollis and Meredith McBride are wonderful adversaries as Titus and Tamora, both brimful of noble conceit and hauteur. With so much more adversity to deal with after dispatching Alarbus, Ollis is far more volatile, erratic, agonized and blustery. How many other Charlotte actors have taken on roles where they incidentally murder two of their own children along the way? Even Titus' cunning is outsized and flamboyant in this delicious performance by Ollis.

Between the horrors she experiences at the outset and in the denouement, McBride is the more calculating, two-faced rogue. While plotting her vengeance upon Titus and the Andronici, Tamora spends her leisure hours two-timing Saturninus, going for the gusto with her Moorish slave Aaron. As much zest as McBride puts into the plots and dalliances of Tamora, Ron McClelland channels into the pure wickedness of Aaron. When he is finally brought to justice, Aaron's only regrets — expressed in two monologues lavished upon him by the Bard — are that he might have inadvertently done some good during his lifetime and that he didn't do a thousand times worse.

Though not in the same league as Titus or Tamora, Saturninus is a pretty nasty piece of work. Brian Willard ably embodies the emperor's unsavory malignity and earns extra credit for co-designing the blood effects with Ollis and overseeing the fight choreography. Others on the tech team earning kudos are stage director Jenn Quigley, who co-designed the period costumes with Mandy Kendall, and Gregory Hewitt, who created the clotted hooves that serve as hand props for our amputees.

Only one glaring weakness mars this COTU effort, Russell Smith as Titus' brother Marcus. By the time the evening ended, clocking in at a trim 1:44, I'd long ago abandoned hope that Smith would begin acting the role of the politic tribune. Just getting through his lines without catastrophe was enough to satisfy me and the anxious actors awaiting their cues. Far better were David Loehr and Chesley Oxendine as Tamora's dopey, bestial sons, decisively avoiding being carbon copies of each other.

The 13-member cast often enters and exits through the audience, making the snug Snug Harbor patio seem heavily populated — and making us often feel part of the Roman populace. Most promising among the remaining players were Robert Brafford and Kendall as the last Andronicus children to survive, Lucius and Lavinia. In an empire that conspicuously lacked spotless role models, Brafford emerged credibly as the worthiest at evening's end. Kendall, bless her heart, was a most poignant victim as Titus' dear daughter. But I can't swear that I was able to refrain from joining the laughter when she finally revealed the names of her ravishers — in an unforgettably horsey manner.

Titus is clearly a unique slice of Shakespeare, almost completely devoid of elegance. It's a banquet of blood that could be to your taste.