The Best Exotic Marigold Hotel: The Avengers for the elderly | Reviews | Creative Loafing Charlotte
Switch to the mobile version of this page.

The Best Exotic Marigold Hotel: The Avengers for the elderly

The Avengers for the elderly demographic, The Best Exotic Marigold Hotel replaces the likes of Captain America, Iron Man and Thor with such art-house superheroes as Maggie Smith, Judi Dench and Bill Nighy. It's a sound ploy releasing this low-key drama as the summer blockbuster race heats up, and it's a worthy sentiment to graciously offer a film for moviegoers both young and old who might not know a Hulk from a Thing. It's just a shame the end result isn't a better movie. 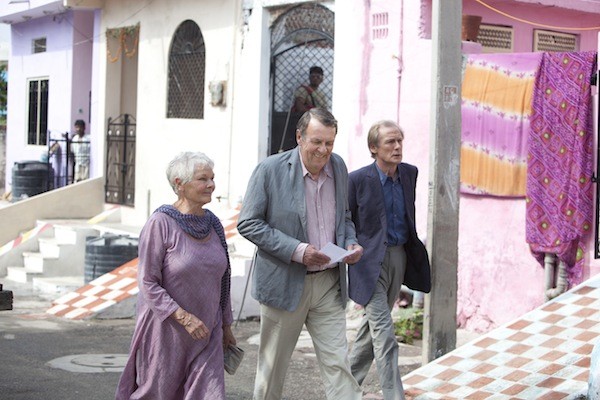 It's certainly harmless, undemanding piffle, as a sizable group of British widows and retirees makes its way to a presumably luxurious hotel in India, only to learn that the dilapidated establishment hasn't kept pace with the glitzy, photoshopped advertisements promoting its splendor. Nevertheless, with boyish, eager-beaver owner Sonny Kapoor (Slumdog Millionaire's Dev Patel) promising to make their stay a pleasant one, all the Brits agree to remain, albeit some more reluctantly than others. Judge Graham Dashwood (Tom Wilkinson) grew up in India and still loves his childhood home, while government employee Douglas Ainslie (Nighy) and newly widowed Evelyn Greenslade (Dench) are open-minded and excited to see what the country might offer. Conversely, housekeeper Muriel Donnelly (Smith) and Douglas' wife Jean (Penelope Wilton) loathe their surroundings and can't wait to get back to England. For their part, lifelong bachelor Norman Cousins (Ronald Pickup) and constant divorcee Madge Hardcastle (Celia Imrie) don't seem to particularly care where they find themselves, as long as they can score some nookie.

Needless to say, the acting by all concerned is fine, although since few of the performers stray away from their patented on-screen personas, most of them prove to be rather toothless as characters (perhaps literally as well as figuratively). Wilkinson and Nighy do have some splendid moments, as both actors employ their faces as much as their words to convey their deep-seated admiration for the land, the people and the culture. Other story threads don't fare as well. The travails of Sonny — both romantically and financially — are yawn-inducing and should have been excised. Smith's character is a repulsive, unrepentant racist, but she removes the shackles of her long-held prejudiced views in about the amount of time it takes the rest of us to watch the film version of To Kill a Mockingbird. And a painful running gag involving one character's use of Viagra hits the screen about a decade too late. Still, for all its flaws, this Exotic undertaking is sure to get a rise out of audiences growing flaccid at the thought of the season's big-budget action extravaganzas.