The drama beyond the DJ

Southern rappers weigh in on the mix-tape game's bad rap 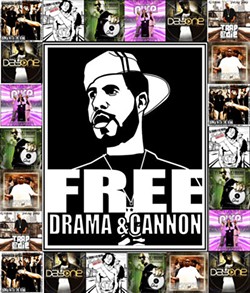 It was only a month ago when DJ Drama and Don Cannon's arrest shocked the music industry.

Morrow, Clayton County and Fulton County police (with assistance from the Recording Industry Association of America) raided the Aphilliates' downtown Atlanta office on Jan. 16, seizing most of their assets and arresting Tyree "DJ Drama" Simmons and Don Cannon. (The two were released on bond the next day.) The RIAA claimed the men, two of the most influential DJs in the hip-hop world, famous for their Gangsta Grillz mix-tape CDs, were nothing more than criminals and bootleggers.

The Gangsta Grillz series was so hot that major labels often hired the Aphilliates to create mix-tape CDs for their artists. (Just before Gnarls Barkley dropped its Grammy-winning album St. Elsewhere, DJ Drama and Gnarls Barkley issued A Trip to St. Elsewhere.) The DJs' personal profiles grew, too. Drama and Cannon performed at the 2006 BET Hip-Hop Awards in Atlanta. As rapper T.I.'s official DJ, Drama is depicted alongside the platinum-selling rapper on the March 2007 cover of XXL, America's most popular hip-hop magazine.

Acclaimed as street rap tastemakers, the Aphilliates became easy targets for the RIAA, which claims that mix-tape CDs are illegal. (Representatives at the RIAA did not respond to inteview requests.) So as Drama and Cannon were imprisoned, DJs and fans alike feared the raid was the first in a series of punitive actions meant to shut the entire movement down.

But the controversy seems to have cooled. After the raid, the "Gangsta Grillz" show that Drama, Cannon and co-Aphilliate DJ Sense host at 8 p.m. Saturdays was suspended from Hot 107.9 WHTA-FM. When it returned on Feb. 11, rappers like T.I., Young Jeezy and Busta Rhymes were among the dozens of listeners offering messages of support.

Now, all of the media hype surrounding the raid appears as if it was nothing more than a road bump on the Aphilliates' path to industry dominance. Just like a murder rap can boost a rap star's buzz, a hit on the biggest DJ crew in the South may mint an already-impenetrable street reputation.

In fact, many observers, including Stix Malone, believe pending Fulton County racketeering charges will be dropped. "I think everything will work out for us," says Malone, music director at Hot 107.9 and a behind-the-scenes member of the Aphilliates camp.

But they may still pay a price, as the Aphilliates will probably have to leave behind the mix-tape hustle that made them famous. "Everything's on pause right now for the mix-tape game," he says. "[The raid] definitely shook up a lot of people."

The mix-tape game won't stop just because the Aphilliates may abandon it. Dating back to the '70s and '80s, when hip-hop culture exploded from a New York-based phenomenon, mix tapes provided many their first hip-hop experience through rare, worn-down cassettes of radio broadcasts, live DJ performances and early rap singles.

As the culture advanced, so did the sophistication of the cassettes, eventually dubbed "mix tapes." Although the current format of choice is CDs, the "mix tape" moniker remains.

Mix-tape DJs are as diverse as hip-hop music itself. There are the hood jocks who compile hot street and strip club joints (DJ Teknikz, DJ Spinz), the underground mixers who blend choice cuts from indie rap artists (DJ Dainja), and even unsigned musicians who simply use the form to build a buzz (Slick & Rose, Wale Oyejide). The least creative simply put out bootlegs of radio hits. Others imaginatively mix and blend songs into an experience similar to what you might hear in a nightclub.

No matter how it sounds, a mix-tape CD is illegal if it includes unapproved copyrighted material. But that's also part of the charm of a great mix-tape CD -- it's an underground, illicit recording. Licentiousness is instrumental to its success.

Big Oomp, an OG in Atlanta's mix-tape circuit since the '90s, now has an imprint label with Koch Records. His imprint scored a major hit last year with DJ UNK's (another local mix-tape DJ) infectious dance anthem, "Walk It Out." "There's rules to the mix-tape game, just like there's rules to the streets. Same game, just different product," he says. "Everybody knows the mix-tape game is illegal. When you're doing illegal shit, you've got to stay as low-key as possible. That's just the bottom line."

A Gangsta Grillz mix-tape CD features exclusive tracks you won't hear anywhere else. Some tracks may include "uncleared" samples (meaning rights to use a preexisting recording weren't approved by the copyright owner) or raw demo material. But the release of each Gangsta Grillz mix-tape CD -- particularly underground hits like Young Jeezy's Trap or Die and T.I.'s Down with the King -- eventually grew into an event unto itself. The series consistently drew acclaim as the epitome of hardcore rap, uncensored and unfiltered by record label politics and copyright laws.

But the laws aren't always clear. Released last spring, Lil Wayne's Gangsta Grillz mix-tape CD, Dedication II, drew thunderous acclaim from music critics. To create it, Lil Wayne provided DJ Drama with a CD's worth of exclusive tracks. "Drama -- and all the Aphilliates, really -- do it totally different," says Stix Malone. "They work with the artists and labels to put out stuff that's not going to be on the radio, or on another artist's album."

However, Lil Wayne is signed to Cash Money, which is distributed by Universal Motown, a division of Universal Music Group. And this is where the question arises: Does Lil Wayne, or Cash Money, have the right to hit Drama off with hot, unreleased tracks? Or should Drama get permission from the bosses who actually run UMG? The RIAA, a trade group that represents the corporate music industry, would argue the latter.

When asked about the RIAA's position on Gangsta Grillz, Phillips says, "I would assume that Drama and the Aphilliates felt that they had some sort of license [since] often the music was given to them by record label executives." He adds, however, "From the RIAA's side and the higher-ups at these labels, they may question whether the [executive] who gave that implied license had the right to give that implied license."

At best, mix-tape CDs help promote artists. But what happens when the DJs promoting these artists get bigger than the artists themselves? By the time of the raid, the Gangsta Grillz brand was so strong that a rapper's Gangsta Grillz mix-tape CD might outsell his actual album. Perhaps the Aphilliates grew too powerful, and the RIAA sought to teach them a lesson.

"When [Gangsta Grillz] came in with all the advertising and all this other stuff, it was a slap in the face," says Big Oomp. "Like, we getting rich off these folks' shit, instead of keeping it low-key."

But Phillips argues that the popularity of mix-tape CDs -- and their alleged negative impact on record sales -- can't be blamed solely on the Aphilliates. "[The RIAA] decided to go after a name that would ... stir [up] the most amount of controversy," he says.

While the debate over mix tapes continues, the Aphilliates are seemingly moving on to bigger things. The crew is focusing on its new Aphilliates record label, distributed by Asylum, which features artists Willie the Kid and Detroit Red. Meanwhile, DJ Drama is finishing his Gangsta Grillz compilation for Atlantic Records. "We're moving more into a label situation, as opposed to a mix-tape thing," says Stix Malone. "There's still work to be done."

But the mix-tape game they left behind isn't over by a long shot. "That's one of those things that you just can't stop. Every DJ is going to want to put out mix tapes," says Malone. "It's like trying to hold water in your hand."