Payday loans and the American dream 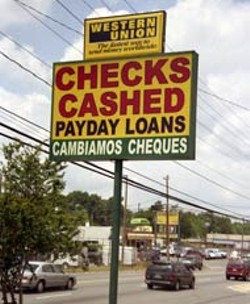 "Get up to $500 before payday." "Cash NOW." "No credit check required." You can't help but notice the signs as you drive down Charlotte's most depressed commercial drags. For some cash-strapped people, relief from having the lights shut off or the car repossessed is found in those signs.These payday loan services, which sprang up about a decade ago, have quickly become the scourge of consumer advocates who charge that the industry makes loan shark-grade profits off the backs and bank accounts of the poor or down-and-out. The industry, however, says it's just providing short-term needed cash to people who have little hope of getting a loan elsewhere.

Viewed another way, payday loans are just a recent incarnation of a practice at least as old as America itself: Entrepreneurs using, skirting or even flouting laws to make a healthy buck. And for their clients — or some would say, victims — payday loans can be an unexpected expression of independence and American Dream-flavored optimism.

For instance, when Russell Weathers, a 37-year-old Charlotte maintenance worker, needed "a little pocket money" to tide him over until payday, relying on family or friends to loan him $100 wasn't an option. "I'd rather do that," Weathers said, gesturing to a payday loan business off South Boulevard last week. "And get it myself, so I don't have to ask somebody."

But while that kind of optimism and independence works for some borrowers, it also has a dark side that's been highlighted by consumer advocates who want regulators to crack down on what they say is an exploitive industry.

"People are always believing things will get better by the next payday," said Beth Bebber, an attorney with Legal Services of the Southern Piedmont, a nonprofit firm that represents low-income people. "This is an industry that trades on people's hope. People always believe they'll be able to work it out, and they can't."

Bebber has represented at least a dozen clients who have taken out payday loans with disastrous consequences. Her first such client borrowed $1,100 to pay an unusually high power bill and ended up paying $5,000 in fees. Another debtor, a single mother with small children, was threatened with criminal worthless check charges, which Bebber said wasn't a legitimate debt collection practice. Still another was paying $900 a month to lenders in fees alone. Afraid for their privacy, their jobs or their reputations, they were unwilling to talk on the record.

For those who have never sidled up to the Plexiglas window that divides most payday customers from the businesses' employees, it works this way: You take in a pay stub and proof that you have a checking account. You write a postdated personal check and in 15 minutes you come out with up to $500. It's supposed to be paid off within a specific time frame, such as two weeks. If you can't pay it back by then, you renew the loan and pay the interest fee again.For instance, Robert Taylor took out a loan to get his car back after an automobile accident cost him his job. The 21-year-old medical office clerk had fallen behind on payments for his 2002 Honda Accord, so he thought paying about $50 on a $750 loan once he got a new job was a good deal. Weathers paid his first $100 loan off the next payday, so he spent only about $18 on the loan.

The payday loan industry says its loans are designed to be short-term financial help of the sort that Taylor and Weathers needed. But many borrowers aren't so lucky. Like Bebber's clients, many fall prey to the rollover effect that can quickly add hundreds, if not thousands, to a loan. About 87 percent of borrowers roll over their payday loan at least once, according to a 2001 report from the state Banking Commissioner to the General Assembly. And more than a third renewed their payday loans more than 10 times.

When you consider the annual percentage rates involved, which lenders are required to disclose, the interest is astounding. A $100 two-week payday loan, with an original fee of $15, has an annual interest rate of 391 percent. For some loans, the rate can top 1,000 percent.

"It is simply the worst kind of loan sharking imaginable," Randy Chambers, treasurer of the Latino Community Credit Union, said. "It is designed to lock people into penury by locking them into a cycle of unbearable debt that they cannot get away from."

Technically, payday lending is illegal here. A law that allowed the businesses expired in 2001 despite opposition from the industry. But the Check 'n Gos (motto: "Where Payday is Any Day") and Advance Americas you see tucked in shopping centers obviously aren't hiding their existence. That's because they make loans through out-of-state banks, which they say means they're not subject to North Carolina laws.

The industry cites Federal Reserve Bank of Richmond figures that say average customers have household incomes between $25,000 and $50,000. The industry also denies that payday lenders target particular groups. But several studies indicate that the businesses are concentrated largely in poorer neighborhoods.

You won't find many next to SouthPark Mall, for instance, but you'll have no difficulty on Independence Boulevard. Zip code 28217, which covers much of South Boulevard, had the third-highest concentration of payday lenders in North Carolina, according to researchers from the University of Florida and California State University.

Also, predominantly black neighborhoods in North Carolina have three times as many payday loan businesses per capita as do mostly white neighborhoods, even when income is taken into account, according to a study by the Durham-based Center for Responsible Lending, which warns consumers against payday loans. Other studies have indicated payday businesses are disproportionately likely to be located near military bases.

Outside one business that cashes checks and offers payday loans, one woman who declined to give her name said she was there to cash a check, not obtain a loan. "I don't know anyone stupid enough to do that," she remarked before jumping into her vehicle.

But for some people, payday loans seem like the only place to go. While places like Crisis Assistance Ministry can give emergency loans, some people either don't know alternatives exist or are unwilling to use them. "There are a lot of people who won't do that out of pride, people who don't see themselves as destitute," Bebber said.

For those who want to stay self-reliant — or at least not rely on family, friends or charity — payday loans can seem like the only route. It's a route that's not taken to keep up with the Joneses, to buy a plasma screen TV or a cruise to the Caribbean, but simply to cover the increasing cost of living in the USA.

"It helped me out," said Taylor. "I mean, I got my car back and everything all caught up. But it's kind of like one of those 'when-your-back-is-up-against-the-wall-and-you-really-have-no-other-alternative' type of things."