The fight for equal access at Romare Bearden Park

Disability advocacy is a civil rights issue too 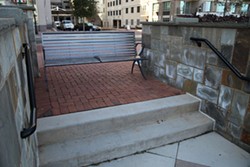 In western North Carolina, a 5th grader was told she couldn't participate in a class field trip because she couldn't walk for great lengths of time. The girl wore braces on her legs, a lasting side effect from having polio as a young child. It was 1966, and the girl was Julia Sain's best friend. Sain told her teacher that if her friend could not go, neither would she.

Now, Sain is executive director of Disability Rights & Resources, a federally funded center for independent living. For more than 30 years, she has been working to ensure that civil rights of people with disabilities are honored in the Gaston, Mecklenburg, Cabarrus and Union counties.

Recently, Sain has been at the center of a controversy over bolted benches, blocked stairways and inaccessible features at the city's crowning jewel, Romare Bearden Park. Last September, Disability Rights & Resources filed a complaint about the accessibility to the water play area along Martin Luther King Boulevard. As a temporary fix, county officials bolted down benches in front of both entrances, making it so that everyone has to take the long way around to the water feature. Call it equal access.

This spring, a new ramp will be built to take the place of one of the stairways. But many still wonder about the woman willing to take on county officials — and how civil rights play into disability advocacy. In an interview with a local TV reporter about Romare Bearden Park, Sain insisted that "it's not legal, especially in 2014" to have separate entrances. "Everybody has to be able to do it the same way."

According to Corye Dunn, an attorney and director of public policy with Disability Rights North Carolina, complaints about equal access have led to high-profile litigation cases. Dunn says Sain's position on separate entrances being unequal is still up for interpretation in the courts.

A recent case against Hollister Clothing has been one to watch. Each Hollister store offers a side door for those who cannot come through its two-step, porch-like entrance. Since the ruling for the plaintiffs in 2011, the case was overturned in appeals even after the Department of Justice Civil Rights Division provided statements of support for the plaintiff's side.

When faced with opposition over the civil rights part of the Americans with Disabilities Act, Sain is always ready. "It was not that long ago that we had separate entrances for black people and white people. You built, on purpose, an entrance that denies a group of people to go through. Can you imagine if those [Romare Bearden Park] stairs said 'No black people can go down these stairs?'"

Sain asserts that the ADA was patterned after the 1964 Civil Rights Act — the 1990 civil rights act for people with disabilities.

As for Romare Bearden Park, the county has gotten away this time with a slap on the wrist and a $25,000 bill for the ramp.

John Rittelmeyer, director of litigation at Disability Rights North Carolina, said, "It is inexcusable when building a public space to not take into account the needs of the disabled."

According to Sain, a real complaint to the Department of Justice would have brought on reviews of everything in Mecklenburg County.

County manager Dena Diorio says she is committed to doing better. "We are certainly going to make sure that it does not happen in the future." The county plans to make changes in the design and development process by engaging representatives from the disability community and training designers on both the technical and civil rights portions of the ADA Law. When asked about Sain's involvement, Diorio said, "She is really an expert. When she comes forward and says we have an issue, I take it seriously."

Because of these recent events, Disability Rights & Resources has reviewed five county projects, finding issues in four of them. With this opportunity to look jobs over before the design phase is even finished, the county can not only potentially save money on any future mistakes, but also provide accessible programs and facilities to a larger community of people.

Sain's 5th grade best friend ended up going on that field trip with her classmates — after the entire class took a stand and administration was forced to make accommodations for her. And when the class graduated at the end of the year, they were the only students to stand in front of the auditorium's stage, rather than go up the stairs. Even at 12, Sain was a fierce advocate.