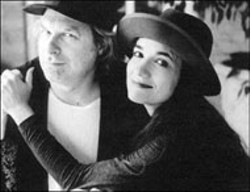 "God writes the words. I just hold the pen."

Fueled by a spiritual quest that's both powerful and inspiring, Buddy and Julie Miller have created a musical style that stems from their unique combination of blue-eyed soul, sweet country charm, and rock & roll energy. Their partnership was the result of a mutual search for meaning, although coming from two different directions. While Buddy's journey from street musician to alt-country star was fairly routine, Julie experienced a series of trials and tragedies that shaped her life in a number of significant ways. Even her career as a Contemporary Christian artist was a challenge, yet the Millers have managed to make the transition while retaining their integrity and beliefs.

The Millers have become the king and queen of the alt-country world, but their humility belies their importance to the music scene. Not only have they managed to carve out a fairly successful place in the Nashville industry, they have done so on their own terms. Buddy has constructed a home studio, and does their recording using Pro Tools. With five Hightone solo releases between them, the pair has finally released its first "official" duet album, titled simply Buddy & Julie Miller.

Identifying it as their first duet album is somewhat deceiving, since they have technically collaborated on all their other releases. According to Buddy, "We tried to meet in the middle on this one, but it leans a bit more on Julie's side." The "real" differences between Buddy & Julie Miller and the other five are simple.

"It has a picture of both of us on the cover," Buddy quips. "And we both play or sing on every song. We recorded this one on my days off from the tours (with Emmylou Harris' band, Spyboy), and it drove me nuts. Julie was at home writing a lot, and when I got there, she usually had a few new songs for us to work on."

Buddy is considered one of the most creative and innovative guitarists around today, and his intensely emotional vocal style is captivating. A professional musician since his teenage years in Ohio, Buddy lived and worked in Austin -- where he met Julie -- and several other cities before settling in Nashville. While he's happy talking about music, he's extremely humble and somewhat reticent to discuss his personal faith.

"It doesn't affect the way I play guitar," he says. "And as far as writing, well, I try to keep it simple and from the heart."

When asked about the obviously spiritual songs on his 1995 solo debut, Man on the Moon, Buddy laughs, "Well, we have redone most of the good ones." He then quickly defers the issue of spirituality in the couple's songs to his wife: "That's more of Julie's area. She can tell you more about that since she writes the words, and that's where the message is."

Growing up in the fertile Austin music scene proved to be both a sanctuary and a maelstrom for Julie, as she struggled to cope after a childhood marred by unspeakable abuse and surrounded by "Christian" hypocrisy. She was unsuccessful at holding herself together, though, and increasingly relied on alcohol and drugs to project the image of the "tough barroom chick" onstage. In The Julie Miller Story, a 1997 video documentary produced for Dutch television, Julie describes in detail how she descended into brokenness, surviving sexual assault, a suicide attempt and several psychiatric hospitalizations during her young adulthood. After becoming a Christian in the early 80s -- an event she describes simply as "whammo!" -- she threw herself headlong into her new spiritual commitment.

"Music had been my god. I decided to give everything to Him, and asked myself, 'What does God want me to do?'" Julie was worried at first that she'd "have to go through a life of misery for God." She then realized that "singing in a non-church situation is more comfortable for me. I started out in bars. God came to me in a bar."

Blessed with an irresistibly warm and exuberant nature, Julie's brand of spirituality is one based on down-to-earth integrity. "I'd rather be in a whorehouse than a church full of hypocrites," Julie says. "I mean it!"

Julie's unintentional liberation was most clearly heard on her Hightone debut, Blue Pony (1997), followed by Broken Things (1999), where her songwriting emerged as a vital commodity. Soon, her tunes were covered by Emmylou Harris, Jimmy Scott and Lee Ann Womack.

"My songs are literal," Julie says. And proof of that is in "Broken Things": "You can have my heart, though it isn't new/It's been used and broken and only comes in blue/It's been down a long road and got dirty on the way/If I give it to you, will you make it clean and wash the shame away?"

Like many of Julie's songs, "Broken Things" has multiple interpretations. Even though the message is inherently spiritual, it's presented in a way that is meaningful to most listeners, perhaps because the songwriting is so in touch with the human experience.

"People who've felt pain in their lives are sensitive to my songs," Julie notes. "It comes from being broken in pieces."

Julie wrote most of the material on Buddy & Julie Miller; of all the tracks on the album, "You Make My Heart Beat Too Fast" is one of the best examples of her versatility. A love song to Buddy, it's remarkable for its playful take on sexual attraction.

"Sex is so misused in this world," Julie states. "The song wasn't intentional; it just wrote itself as I was putting on my makeup. We played it first with real finesse, and then the 'Wild Thing' guitar thing came along."

No wonder the Millers have such a wonderful and successful marriage. They listen to each other. And to God.