The government shutdown, my boyfriend and me 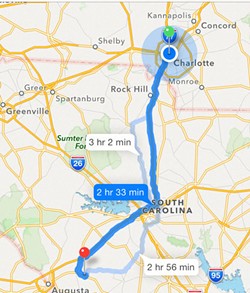 "Babe, can we survive financially with me being off for 4 to 5 weeks?"

That was the text message Kenny, my boyfriend of more than four years, sent me a few days ago. As one of 76 percent of Americans who live paycheck to paycheck, I wasn't sure how to respond.

Before that text message, the government shutdown hadn't affected me personally. I wasn't planning to visit any national parks or monuments, apply for disability benefits or buy a house any time soon. I decried the shutdown among friends and empathized with the thousands of federal employees who were told to go home on Oct. 1 - but I continued to live my life in Charlotte as usual, not thinking the actions of more than a few idiotic politicians could touch little ol' me.

By the time Kenny got off work the day of the text, though - ending what was only his second week in training at the Savannah River Site nuclear facility in Aiken, S.C. - he'd received a notice of mandatory furlough. (According to the Augusta Chronicle, his employer, security contractor Wackenhut Services Inc., has furloughed 270 of its 700 employees at the Savannah River Site, which is owned and operated by the Department of Energy.) He won't be back to work earning a paycheck until the government shutdown and the debt ceiling crisis are both resolved - or until "further notice."

About a month ago, the man who carried heavy cases of water up the stairs for me, who watched season 2 of Scandal with me religiously on Thursday nights, decided to quit his job in Charlotte and move two-and-a-half hours away for a position that paid better. "This is for us," he said repeatedly, trying to convince me the time apart would pay off in the long run. Or maybe he was trying to convince himself. I supported his decision, even though it meant I'd be living alone again after almost two years. "If it gets too hard for us, I'll quit and come back," he promised. I cried the day he drove to the other side of South Carolina, his car packed with his belongings.

Distance was going to be the biggest obstacle we were going to face with this move; that is, until a group of House Republicans refused to pass a spending bill without it including terms to defund or derail the Affordable Care Act and thus shut down the government.

You had one job, Congress.

As of press time, legislators and the White House still have not come to an agreement about the federal budget.

To make Wall Street a little more nervous, on Thursday, Oct. 17, the Treasury Department will run out of money to pay the government's bills unless the federal debt ceiling is raised.

Kentucky Sen. Rand Paul said on Oct. 13 that it was "irresponsible" of President Obama to "scare people" with potential repercussions of not increasing the amount of money the government can borrow. Hello, Sen. Paul: We're well past two weeks without a fully functioning government and folks aren't getting paid. I'd say people are already a little scared.

At least, I am. Though thousands have been furloughed or are working for no pay, some will receive back pay. Not Kenny and the other men in his training class. And because they just started working for Wackenhut a couple of weeks ago, they don't have personal or vacation time to rely on for income during their time off. That loss of income affects me - all the way in Charlotte - too.

You see, like many of the people who moved to Aiken for this opportunity at the nuclear facility, we are still transitioning to this new life. For example, I still live in our cozy, yet expensive, condo in NoDa with our two small dogs, fully expecting Kenny's help with rent in November.

Kenny and I have talked about some ways to save money until he goes back to work. Luckily, we have family to help out if needed. But I worry about those who don't have someone to lean on.

The politicians in D.C. should be worried, too. But considering they're still (as of press time) deadlocked over negotiations, clearly they're not.

On Sunday, Kenny and I sat together in the small bedroom he's renting near his new job, his 6-year-old son watching cartoons between us. As I skimmed the notice of furlough his supervisor gave him, which offers options to use vacation time or apply for unemployment benefits, I noticed a tag line at the bottom of the letterhead: "Professionalism with Integrity." If only our elected officials could abide by such a creed.