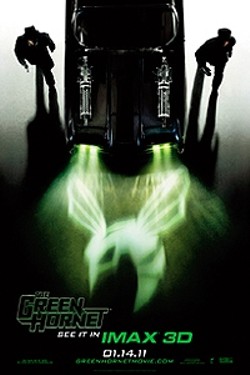 As the son of LA's most prominent media magnate, who dies mysteriously, Britt Reid inherits his father's empire. Striking an friendship with one of his father's more inventive employees, Kato, Britt sees a chance to do something meaningful in his life: fight crime. To get close to the criminals, Britt and Kato plan to pose as criminals themselves. Britt becomes the vigilante Green Hornet, and Kato builds the ultimate in advanced retro weaponry: an indestructible car, equal parts firepower and horsepower. The two quickly make a name for themselves, hunting down the man who controls LA's underworld: Benjamin Chudnofsky. Presented in IMAX® 3D, this film has been digitally re-mastered into the image and sound quality of The IMAX Experience®.

The Green Hornet is not showing in any theaters in the area.