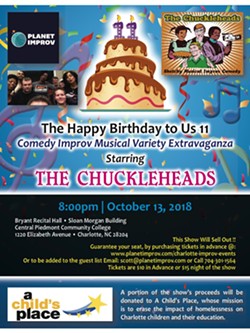 When: Sat., Oct. 13, 8-10 p.m. 2018
Phone: 704-301-1564
Email: scott@planetimprov.com
Price: $10/$15
www.planetimprov.com
The HAPPY BIRTHDAY TO US 11 COMEDY IMPROV MUSICAL VARIETY EXTRAVAGANZA STARRING THE CHUCKLEHEADS is a non-scripted improvisational comedy show (much like the television game show “Whose Line Is It Anyway?”) with the mix of scenic, musical, game show and heavy-duty audience participation elements for which the Chuckleheads are famous. In addition, there will be a fundraising raffle & silent auction after the performance with prizes donated from entertainment, leisure, theatrical, restaurant, grocery, sports teams and many other types of local and national companies.