Belle de Jour, The Ides of March, Sky Riders among new home entertainment titles | View from the Couch | Creative Loafing Charlotte
Switch to the mobile version of this page. 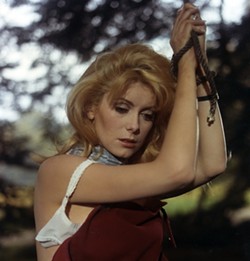 ABDUCTION (2011). Sure, it's easy to pick on the Twilight guy. Because who's gonna rush to his defense other than smitten Team Jacob fans? Make no mistake about it: Abduction, in which Taylor Lautner is handed his first starring role in a motion picture, will never ever be mistaken for a good movie. But the declarations (from critics and Twilight bashers alike) that it was one of the worst pictures of 2011 struck me as armchair grandstanding — hey, it may star a wooden werewolf, but at least it's thankfully free of any zoo animals who talk like Sylvester Stallone and Adam Sandler. John Singleton, whose Boyz N The Hood remains continents removed from most of his subsequent work, slides further into irrelevance with a Junior G-Men-type tale that features a stellar supporting cast, some decent action sequences, and a leading man who reacts to every dire situation as if he's just been asked to clean his room. Lautner plays Nathan, a high school kid who has Ellen Ripley (Sigourney Weaver) for a psychiatrist and Lucius Malfoy (Jason Isaacs) and the Coyote Ugly bar owner (Mario Bello) for parents. When he and his classmate Karen (Lily Collins, whose performance is about as monotonous as most of daddy Phil's music) embark on a school assignment that inexplicably leads them to do research on a missing persons web page, they discover an old photo of a little boy who looks like a pre-Taylor Lautner Taylor Lautner. IMs are swapped, Euro-trash baddies arrive to blow up the house, and suddenly Nathan and Karen find themselves on the run. As these crazy kids try to discover why Nathan is being pursued by grown men who are clearly not Stephenie Meyer devotees, they must also decide whether or not to trust Doctor Octopus (Alfred Molina), the CIA agent assigned to the case. Sixteen years later, I still fondly recall the priceless Siskel & Ebert moment when Roger Ebert dismisses the action flick Fled by stating, "I guess it sort of holds your attention while it's happening. I mean, something is moving on the screen, so you look to see what it is." (To which a laughing Gene Siskel retorts, "What a compliment!") Abduction inspires the same level of commitment: You look at the screen mainly because it beats staring down at the couch cushions.

DVD extras include a making-of featurette; an on-camera production journal with Lautner; a piece on the film's stuntwork; and a gag reel.

BELLE DE JOUR (1967). It's been 45 years since Luis Buñuel's biggest commercial success first hit the screen, and yet its subject matter — humankind's perennial struggle to deal with the many facets of sex — makes it as relevant as ever. In a perfectly pitched performance, Catherine Deneuve stars as Severine, a frigid Parisian housewife who harbors masochistic fantasies even as she ignores the advances of her caring but clueless husband (Jean Sorel). She learns about a brothel that's willing to employ her for a few hours during the afternoons; initially reluctant to join and, once she does, hesitant to perform the acts she witnesses being carried out by the other prostitutes, she eventually grows more bold than any of them, finally entering into a dangerous relationship with a brutish, steel-toothed client (Pierre Clementi). A typical Buñuel rant against bourgeoisie hypocrisy, Belle de jour also lashes out against unjust patriarchal standards and rigid marital conformities, and the director, writing the script with the great Jean-Claude Carriere (they adapted Joseph Kessel's novel), blurs the lines between reality and fantasy to a startling degree (Buñuel, who passed away in 1983, stated on more than one occasion that even he didn't understand his own ambiguous ending!). Often erotic, often disturbing, and packed with intriguing scenarios (the contents of a certain box prove to be as mysterious/mesmerizing as the contents of the more famous containers in Pulp Fiction and Kiss Me Deadly), Belle de jour is beautifully bold.

THE IDES OF MARCH (2011). Friends, Charlotteans, countrymen, lend me your ears; I come to bury Clooney, not to praise him. It's not that I love Clooney less, but that I love good movies more. And for huge chunks at a time, The Ides of March is a good movie. What's more, director-producer-cowriter-star George Clooney is not only a fine filmmaker but also a fine American, espousing the progressive ideals that, when adopted by those in charge, help make this country great. These ideals are regurgitated in this slick motion picture (adapted from Beau Willimon's play Farragut North), with the suave leading man using his charisma to punch across the character of Governor Mike Morris, a presidential aspirant locked in a heated battle with another Democrat for the party's nomination. His press secretary, Stephen Myers (Ryan Gosling), believes in him and works hand in hand with campaign manager Paul Zara (Philip Seymour Hoffman) to insure victory. Stephen is ambitious and intelligent, so it's no surprise that the opponent's campaign manager (Paul Giamatti) tries to lure him to their side, that a New York Times reporter (Marisa Tomei) turns to him for insider info, and that a cute intern (Evan Rachel Wood) climbs into bed with him. But Stephen gets blindsided by dirty politics and is further stunned to discover a secret that could derail the whole campaign. This is basically Gosling's movie, which is a good thing since Clooney's character largely just shows up to deliver speeches that reflect the actor's real-life liberal leanings. It's not that I disagree with what's being spoken, but there are more inventive ways for a film to lay out its agenda without resorting to ham-fisted proselytizing (see: Bulworth; Bob Roberts). Yet ultimately, the movie's simplistic view of the political landscape is no worse than the melodramatic turn it takes late in the game. Still, despite its faults, there's much to enjoy, starting with the superlative performances by old pros Giamatti and Hoffman and the still-rising Wood. The Ides of March is satisfying and frustrating in equal measure; just mark it down as a split ticket.

Blu-ray extras include audio commentary by Clooney and cowriter-coproducer Grant Heslov; a look at the film's cast; a featurette on the origins of the film; and the piece What Does a Political Consultant Do?

KILLER ELITE (2011). Killer Elite is basically what The Expendables 2 would look like if everyone except Jason Statham decided to bail on the project. A fussy action film that's heavy on the firepower and the testosterone but short on anything resembling complexity or wit, this stars Statham as Danny, a former assassin whose mentor (Robert De Niro) is being held captive by a Middle Eastern sheik. The wealthy ruler wants Danny to avenge the deaths of his three sons by taking out the overzealous British operatives responsible for their grisly slayings; Danny is forced to accept the assignment to save his friend's life, and he's thereafter pursued by a maverick British agent named Spike (Clive Owen). I don't know which is more risible: Owen's mustache, which would have been the envy of any 70s-era porn star, or the fact that someone as tough and charismatic as Owen could possibly be saddled with the name Spike. At any rate, anyone hoping for an intriguing game of cat-and-mouse between Statham and Owen — on the order of, say, Harrison Ford and Tommy Lee Jones in The Fugitive or De Niro and Al Pacino in Heat — will soon realize that their skirmishes, both mentally and physically, can't even match the feud between Tom and Jerry — or Punch and Judy, for that matter. As for De Niro, he has long stopped mattering as an actor, merely content to collect paychecks with the same frenzy as Pac-Man eating all those dots. Having said that, his presence here is welcome, not only for providing the picture with its most humane moments but also by keeping him too busy to make another damn Fockers sequel.

THE LAST HARD MEN (1976) / SKY RIDERS (1976). When the late James Coburn won a Best Supporting Actor Oscar for 1998's Affliction, he noted in his acceptance speech, "Some of [the films] you do for money; some of them you do for love." Only a man with genuine talent could say something like that and get away with it (imagine Ashton Kutcher or Dolph Lundgren spouting such a line), and Coburn clearly possessed the requisite thespian skills. Far be it for me to guess whether he made The Last Hard Men and/or Sky Riders — both packaged together on one disc by Shout! Factory as an Action Double Feature — for money or love, but in both instances, he's better than the material which surrounds him.

The Last Hard Men finds him sharing star billing with Charlton Heston, who plays the now-retired lawman (Sam Burgade) who put away Coburn's vicious outlaw (Zach Provo) some years back. Provo has now escaped and is seeking revenge, which he aims to collect by first kidnapping Burgade's grown daughter (Barbara Hershey) and then killing his longtime nemesis. Journeyman director Andrew V. McLaglen usually found himself helming such enjoyable actioners as The Wild Geese and The Sea Wolves — and, yes, the MST3K fave Mitchell — but this adaptation of a novel by Death Wish author Brian Garfield is no fun at all, with the charismatic turns by Coburn and Michael Parks (as a soft-spoken sheriff) no match for the off-putting seediness permeating the entire project.

Sky Riders is the better of the pair, though that's hardly a ringing endorsement. Hang-gliding exploded as a popular sport during the early 1970s, so it's not surprising that Hollywood seized upon its appeal by featuring it prominently in a major motion picture. Coburn plays devil-may-care Jim McCabe, whose former wife (Susannah York) and her kids are kidnapped by extremists out to extort money from the ex's powerful second husband (Robert Culp). McCabe decides that the only way to infiltrate the terrorists' mountaintop retreat is by air, so he hires a team of professional hang-gliders to join him in blasting his way into the castle from above. Sky Riders is utterly ridiculous and generously laced with plotholes (why do our heroes repeatedly keep flying in front of the weapon-wielding villains rather than heading off in the other direction?), but some excellent aerial photography adds some modicum of acrophobia-inducing suspense. Incidentally, much of that photography was shot by Greg MacGillivray, who also co-wrote the script and served as "aerial action director"; he later became one of the preeminent documentarians on the IMAX circuit, responsible for such titles as The Living Sea, Dolphins and the superb Everest.

DVD extras for both films include theatrical trailers; TV spots; and still galleries.