The Island, The Man Who Knew Too Much, Taken 2 among new home entertainment titles | View from the Couch | Creative Loafing Charlotte
Switch to the mobile version of this page.

The Island, The Man Who Knew Too Much, Taken 2 among new home entertainment titles

COMPLIANCE (2012). One of the most deeply disturbing movies of recent vintage, Compliance opens with the words "Inspired By True Events," a declaration that should always be taken with a grain — or pound — of salt. Yet my post-viewing exercise consisted of tracking down reliably sourced information on the Internet, and it turns out that every horrifying incident seen in the movie also occurred in real life, the sort of depressing intel that makes one weep for humanity. Written and directed by Craig Zobel, whose previous work includes 2007's shot-in-Charlotte gem Great World of Sound, the film is set at the fictional fast food eatery ChickWich (in real life, it was a McDonald's in Kentucky). Sandra (Ann Dowd), the middle-aged manager, receives a phone call from someone identifying himself as Officer Daniels (Pat Healy); he informs her that one of her employees, a pretty teenager named Becky (Dreama Walker), has been accused of stealing money from a customer and must be detained at the restaurant until police can arrive. Sandra dutifully complies, even as the caller's demands grow ever more outrageous; before the whole sordid drama comes to a close, lewd and even violent acts will have been committed. More than just a study of this country's oft irrational fear of law enforcement (how many of us slow down when we see a car pulled over by a police officer, as if we expect said lawman to suddenly elect to ignore the pulled driver and chase us Smokey and the Bandit style?), the movie also examines the manner in which even a drop of power turns otherwise reasonable people into monsters. Compliance is a difficult watch, but it's directed with skill and fronted by strong performances from Dowd and Walker. A coda reveals that 70 such incidents have occurred in over 30 states, but what it does not reveal is that the man behind most of them (including the McDonald's scam), after finally being arrested, was then acquitted — presumably by a jury so stupid, you wonder how its members have the brainpower to tie their shoes each morning.

Blu-ray extras include a behind-the-scenes piece; an interview with Zobel; and the theatrical trailer. 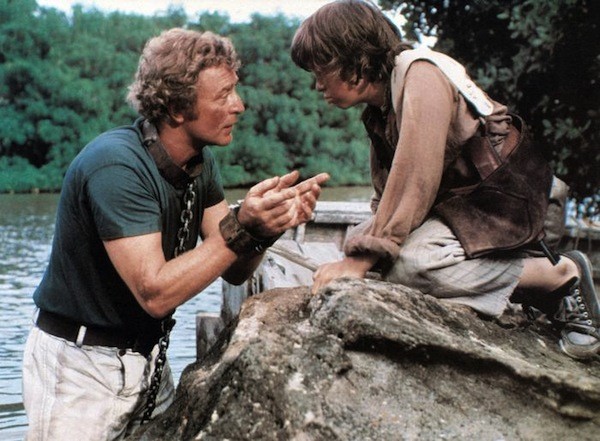 THE ISLAND (1980) / DEATH VALLEY (1982). Scream! Factory, the horror line launched last year by Shout! Factory, offers two early-'80s duds that will satisfy the cultists but probably no one else.

After the monstrous success of Jaws — both the mediocre 1974 novel and the brilliant 1975 film — author Peter Benchley immediately followed up with two more oceanic endeavors in print: 1976's The Deep and 1979's The Island. Benchley co-wrote the screenplays for both Jaws and the 1977 screen version of The Deep before taking on solo scripting duties for 1980's adaptation of The Island. But while Jaws was a commercial and critical hit and The Deep was a commercial hit but critical dud, The Island proved to be a flop with everyone, losing a good chunk of change for its studio in the process. Michael Caine stars as Blair Maynard, a reporter who journeys to the Caribbean to investigate the disappearance of numerous ships and their passengers in uncharted waters. He drags his bratty son Justin (Jeffrey Frank) along with him, a bad decision once the pair gets captured by the cause of all those missing vessels: a band of modern-day pirates who are inbred descendants of actual cutthroats from 300 years earlier. Led by John David Nau (David Warner), the sterile gang brainwashes Justin into becoming one of them while keeping Blair alive so he can mate with the only fertile woman (Angela Punch McGregor) on the island and spark a new generation. Risible passages abound, including a sequence in which all action stops so Nau's men can take on a Bruce Lee wannabe and a climactic howler in which Caine's thinking-man conveniently is allowed to turn into Rambo. Yet perhaps the biggest flaw is that these savage and vicious pirates aren't particularly frightening or imposing, instead coming off as Peter Pan's Lost Boys all grown up — to riff from Kentucky Fried Movie, they aren't tough and ruthless so much as they're rough and toothless. The score by legendary composer Ennio Morricone isn't bad, just wildly out of place: As the pirates head toward a yacht to slaughter the college-age kids aboard, a cheerful, bouncy track isn't really what the scene requires. As for Caine, he's typically reliable, although this was the last of three notorious bombs (following Ashanti and Beyond the Poseidon Adventure) he headlined in a two-year span; thankfully, his next project, released a mere month after The Island, was Brian De Palma's box office hit Dressed to Kill. 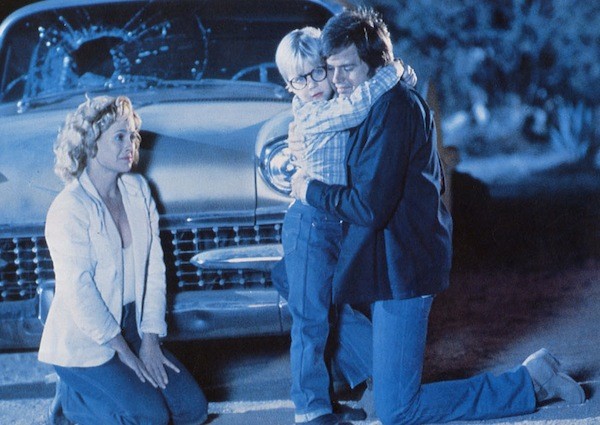 A year before he first endeared himself to the American public with his portrayal of Ralphie in the Yuletide classic A Christmas Story, Peter Billingsley appeared as young Billy Stanton in Death Valley, a low-key thriller that makes good use of its title setting. Of course, nobody here says, "You'll shoot your eye out, kid," although the opportunity does arrive when a pistol-packing Billy squares off against the psychopath (Stephen McHattie) who's been murdering tourists in the famed California valley. A city boy from New York, Billy is visiting the West Coast with his divorced mom (Catherine Hicks), who has returned to the area to strike up a relationship with her former high school fling (Paul Le Mat). While the local sheriff (Wilford Brimley) has made no headway in ascertaining the identity of the killer who's been carving up strangers, Billy stumbles across a clue that places him squarely in the lunatic's path. Director Dick Richards has fashioned a perfectly serviceable thriller that unfortunately becomes derailed by both an extended — and ludicrous — climax as well as an increasingly silly performance by McHattie. 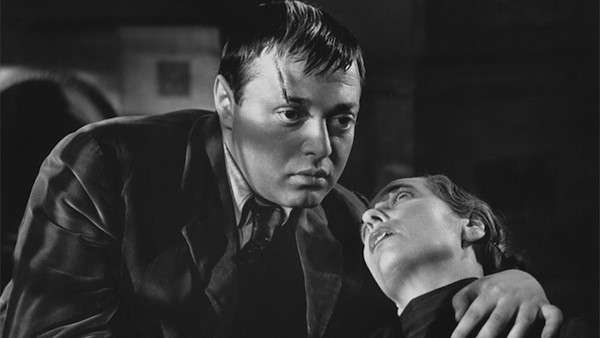 THE MAN WHO KNEW TOO MUCH (1934). It's not often that filmmakers are given the opportunity to remake their own movies, but that was the case with Alfred Hitchcock and The Man Who Knew Too Much. The first version was made in 1934 while the director was still entrenched in making motion pictures in his native England; the second version appeared in 1956, long after Hitchcock had moved to America and proven himself a world-class filmmaker. The Master of Suspense himself prefers the expensive, color remake over the low-budget, black-and-white original, but cineasts continue to argue over which take is better. In the final analysis, both are comparable in quality for different reasons, but the greatest single component of either film can be found in this '34 edition: the great performance by Peter Lorre as a menacing criminal mastermind. While the plots of both films are similar in general terms — a married couple vacationing in a foreign land stumble across an assassination plot but must remain quiet after their only child is kidnapped by the schemers — there's no character in the 1956 version half as interesting as the villain played by Lorre in his first English-speaking film (not yet familiar with the language, he had to learn his lines phonetically). Leslie Banks and Edna Best play the British couple caught up in the international intrigue, as their characters Bob and Jill Lawrence return from vacation in Switzerland minus their daughter Betty (Nova Pilbeam), who's been absconded by the chortling Abbott (Lorre) and his men. The Lawrences are thus forced to take matters into their own hands, and the trail for their missing daughter leads them to a dentist nearly as sadistic as the one Laurence Olivier would play decades later in Marathon Man, a bizarre church gathering of sinister sun-worshippers, and the Royal Albert Hall for a late-inning sequence so potent that Hitchcock kept (and improved on) it for his 1956 version. 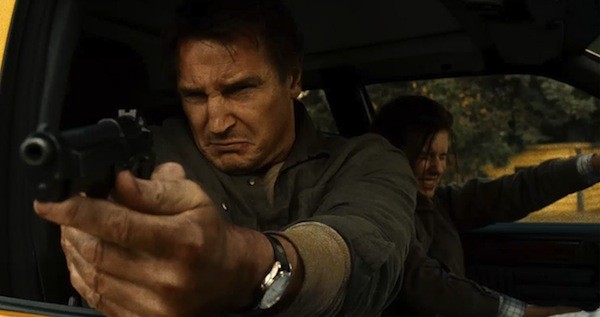 TAKEN 2 (2012). Is there a more authoritative presence in movies today than Liam Neeson? The Irish actor has always had stature on screen, but ever since his character laid out the rules to the Albanian dirtbags who kidnapped his daughter toward the beginning of 2009's Taken (the speech that opens with "I don't know who you are" and ends with "I will find you, and I will kill you"), he's subsequently shown that no one or no thing — whether it be humans (Unknown) or wolves (The Grey) — should mess with him. When he speaks, his gruff voice and no-nonsense demeanor mean we should listen — heck, were Neeson to show up at my front door right this minute and calmly tell me that I need to set fire to my own residence, I would start hunting for matches immediately. A similarly destructive request is forwarded by his character in Taken 2, in which he returns as ex-CIA operative Bryan Mills. As he's held prisoner by the thugs hoping to avenge those he killed in the first film, he's communicating with his daughter Kim (Maggie Grace) via cell phone. In order for her to locate his whereabouts, he needs to pinpoint his position, so he orders her to toss grenades(!) over the rooftops of Istanbul so he can listen for the blasts. Somehow, I doubt Bryan would be so quick to explore this route if he was being held hostage in a California or Pennsylvania suburb, but such is the "us against them" view taken by this cheerfully xenophobic series that, intentionally or not, mainly pushes the notion that Americans should stay home since the rest of the world is a dangerous place populated with nothing but sex traffickers and gun-toting loonies (since, God knows, we don't have any of these types in the U.S. of A.). Such a myopic view is easy to ignore because these are disposable popcorn pictures with little political or moral heft — besides, the first Taken was actually an exciting, accomplished movie that expertly mined its premise (cuz, really, who doesn't want to see Liam Neeson blow away sleazoids who turn teenage girls into drug-addled sex slaves?). Taken 2, however, is nothing more than a lazy retread, with a director less skilled in the art of action choreography (Olivier Megaton replaces the first film's Pierre Morel), generic villains rounded up from Central Casting, and an endless car chase that somehow manages to run 100 minutes in a 90-minute movie ... unless my math is way off, in which case it just felt that way.

The Blu-ray contains the PG-13 theatrical version as well as an unrated cut. Extras include an optional Black Ops Field Manual function that includes trivia, maps and a "Kill Counter"; deleted scenes; an alternate ending; and an interview with Neeson.