The Killers, Serena, Vanilla Sky among new home entertainment titles | View from the Couch | Creative Loafing Charlotte
Switch to the mobile version of this page.

THE KILLERS (1946/1964). Ernest Hemingway's short story "The Killers" has been adapted on several occasions, and apart from a few obscure shorts and a 1959 TV version starring Dean Stockwell and Diane Baker, this impressive Criterion release manages to place all these hard-boiled eggs in one basket. There's a 1949 radio adaptation starring Burt Lancaster and Shelley Winters, a 1956 student project from future Soviet filmmaker and Cannes festival fave Andrei Tarkovsky (Solaris, The Sacrifice), and a 2002 audio reading of the original short story by Stacey Keach (who had played Hemingway in a 1988 television miniseries). The main course, however, consists of the two feature-length theatrical versions — one's a bona fide classic, while the other's an interesting misfire most notable for the final film appearance of a future U.S. president.

Most A-list actors spend years working their way up the Hollywood ladder, but Burt Lancaster was a star right from the start. He nabbed top billing for his film debut in 1946's The Killers, an excellent film noir offering that also marked second-billed Ava Gardner's first prominent year in pictures after kicking around in bit parts. The movie opens with two hired guns (noir regular Charles McGraw and future Cannon and Jake and the Fatman star William Conrad) rubbing out an anonymous gas station attendant known as The Swede (Lancaster). It's up to insurance investigator Jim Reardon (Edmond O'Brien), with the assistance of police lieutenant Sam Lubinsky (Sam Levene), to learn the whole story, which we see in a series of flashbacks detailing how The Swede fell for the genre's requisite femme fatale (Gardner) and thereby got mixed up in a heist involving a trio of shady characters (Albert Dekker, Jack Lambert and Jeff Corey). Robert Siodmak directs this for maximum shadowy impact, aided by a crackerjack script from Anthony Veiller (and an uncredited John Huston) and stellar performances from a concrete-solid cast. This earned four Academy Award nominations, including bids for Best Director and Best Adapted Screenplay. 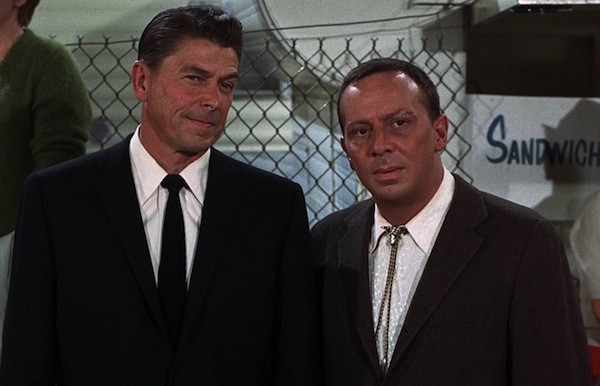 Because Hemingway's brief story ends with the two paid assassins killing The Swede, filmmakers were required to fabricate the rest of the tale to fill out an acceptable running time. So while the 1946 version centers around the investigation by O'Brien's insurance investigator and relegates the two hitmen to minor involvement, the makers of the 1964 version elect to make the titular killers the leads. Lee Marvin and Clu Gulager essay the roles, bumping off a former race car driver named Johnny North (John Cassavetes) and then wondering why exactly someone wanted him dead. Angie Dickinson co-stars as North's duplicitous squeeze, while Ronald Reagan appears in his final role before devoting himself to politics. He plays a violent crime boss, and is it a stretch to state that his notorious slap of Dickinson's character prophetically presaged the abuse he would foist upon this country during his eight-year reign as U.S. president? (Nah, not a stretch at all!) At any rate, it was violent scenes like this one that convinced NBC not to release the picture as a made-for-TV movie (it would have made history as the first) but instead have Universal give it a theatrical run. This color version of Hemingway's yarn is every bit as fatalistic as its black-and-white predecessor but nowhere near as impressive, with a comparatively simplistic screenplay and, despite the best efforts of director Don Siegel, a drab visual presentation. Marvin and Gulager are memorable as the killers, while the score is by a young John Williams (then still billing himself as Johnny Williams). 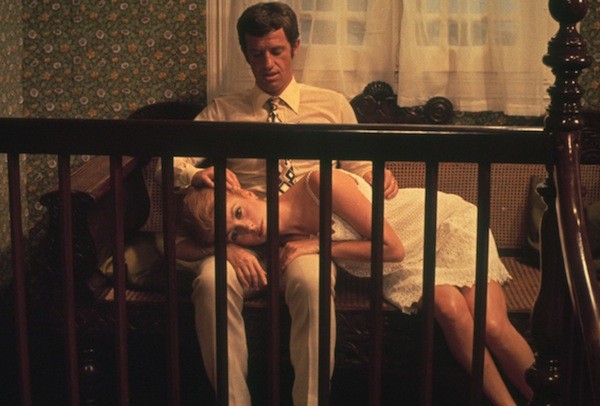 MISSISSIPPI MERMAID (1969). At one point in Mississippi Mermaid, as Louis Mahé (Jean-Paul Belmondo) listens to his wife Julie (Catherine Deneuve) explain the difference between a bastard and a fool, he decides that he would rather "be taken for a fool than for a bastard." No worries there: In the tried-and-true tradition of film noir — of which this picture is a sun-splashed cousin — a fool needs to be on hand in order to be easily duped by an alluring femme fatale, and that's what happens in this entertaining French import. François Truffaut paid homage to his hero Alfred Hitchcock with 1968's The Bride Wore Black, an adaptation of the novel by Cornell Woolrich (and reviewed earlier this year in this column). Here, he again turns to Woolrich, transforming the author's novel Waltz Into Darkness into a star-powered vehicle in which a tobacco plantation owner learns that his mail-order bride isn't who she claims to be — and subsequently discovers that he doesn't even care, since he's hopelessly captivated by this blonde beauty. But whereas Louis can't help but wear his heart on his sleeve when it comes to his spouse, she in turn proves to be an elusive figure, with Deneuve expertly keeping us guessing as to whether this woman truly cares for her husband or only cares in murdering him. Truffaut playfully employs various filmmaking techniques throughout the picture — for starters, note the iris shot that figures in one sequence — and, true to his roots as a film critic for Cahiers du Cinéma, he amusingly includes a brief scene in which the principals discuss the merits of Nicholas Ray's offbeat 1954 Western, Johnny Guitar. Mississippi Mermaid was remade by Hollywood in 2001 as Original Sin, a terrible thriller starring Antonio Banderas and Angelina Jolie. 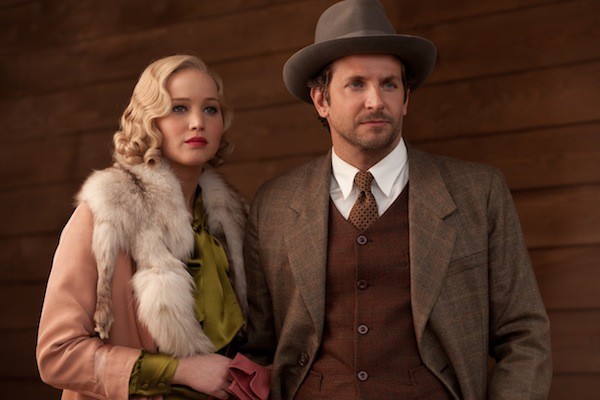 SERENA (2015). The bestselling novel by Ron Rash, an NC native and a professor at Western Carolina University, was highly acclaimed upon its release (including by former Creative Loafing editor John Grooms), but all the elements that made it such a literary beaut are apparently missing from this dismal screen adaptation. What's on view is a poorly paced, indifferently acted drama about newlywed couple George and Serena Pemberton (Bradley Cooper and Jennifer Lawrence) and their efforts to create a timber empire in Depression-era North Carolina (although set here, filming was done in the Czech Republic). Cooper and Lawrence are excellent actors — and they've worked together in the past, in both Silver Linings Playbook (Oscar for her, nomination for him) and American Hustle (noms for both) — but they're curiously miscast in this dud. Cooper never projects the killer instinct or go-for-broke zest of an empire builder, while Lawrence, playing a role described by many book reviewers as an Appalachian Lady Macbeth, instead comes across like Joan Collins portraying a vapid vamp in a bad TV miniseries. Her progression from steely protofeminist to unhinged psycho occurs almost instantaneously, and Rhys Ifans' role as her murderous, psychically connected henchman makes little sense. Serena reaches its risible zenith when George confronts a Carolina panther. No, it's not Cam Newton, but such an illogical cameo wouldn't have made the movie any more of a mess.

Blu-ray extras include a making-of featurette; deleted scenes; and a comparison between the film and the novel.

VANILLA SKY (2001). Before making a stateside splash with 2001's The Others, writer-director Alejandro Amenábar crafted a handful of films in Spain, including the 1997 sleight of hand shocker Open Your Eyes (Abre los ojos). An intriguing drama about a self-centered hunk who suffers from strange visions after getting disfigured in a car accident, the movie was unpredictable in a manner that begged comparison with something as unique as Being John Malkovich: Thinking far outside the box, Amenabar provided a whiplash viewing experience akin to sitting down to watch The Big Chill and then having the film switched to Saving Private Ryan halfway through. Vanilla Sky is Cameron Crowe's risky remake, and what's most shocking about this film, a controversial conversation starter upon its original release, is how faithful it remains to the original. In short, this isn't a typically dumbed-down rehash and, as such, it dissatisfied the rank and file of multiplex moviegoers but earned the appreciation of adventurous film fans. Tom Cruise, a narcissist who nevertheless won't back away from perilous parts, shrewdly mixes both facets of his career as the pretty boy whose perfect life turns into a living hell after his face gets mangled, while Cameron Diaz, as his fatal attraction, slinks through the proceedings like a feral feline (Penelope Cruz, also in the original, reprises her role as the protagonist's dream girl, but she's merely average). Unsettling, perplexing and playing like the visualization of a caffeine buzz, this is a film open to various interpretations as well as repeat viewings. Paul McCartney's title tune earned a Best Original Song Oscar nomination, yet while Diaz nabbed approximately a dozen citations for her supporting performance (including Golden Globe and Screen Actors Guild noms), she was once again snubbed by the Academy.

Blu-ray extras include audio commentary by Crowe and music composer (and Crowe's wife) Nancy Wilson; an alternate ending; a dozen alternate scenes; an interview with McCartney; and a gag reel.

VANYA ON 42ND STREET (1994) / ANDRÉ GREGORY & WALLACE SHAWN: 3 FILMS (1981-2014). The creative team behind 1981's cult hit My Dinner with André — Louis Malle, Wallace Shawn and André Gregory — reunited for this absorbing experiment that proves to be a special treat for theater lovers. For several years, stage director Gregory and various actors assembled to perform Anton Chekhov's Uncle Vanya in a dilapidated NYC theater, and one of their run-throughs was recorded by film director Malle. This is that document, a minimalist interpretation of Chekhov's play about wasted lives and unrequited love. Malle makes no pretenses about this being a "movie" — it's a "filmed stage performance" through and through — but the acting is so splendid and the staging so immediate that few will complain. Shawn stars as the tormented Vanya, filled with anger toward the pompous professor (George Gaynes) he has long served and bubbling with love for his employer's beautiful young wife, Yelena (Julianne Moore). The local doctor (Larry Pine) also has feelings for Yelena, so much that he barely acknowledges the existence of his greatest fan, the professor's plain-looking daughter, Sonya (Brooke Smith). Moore, Smith and Pine are the cast standouts; this was the esteemed Malle's final film before his death in 1995.

Vanya on 42nd Street had already been available on Blu-ray from Criterion, but the outfit has now repackaged it as part of the box set André Gregory & Wallace Shawn: 3 Films, a look at the trio of titles made by the two innovative filmmakers and friends. In addition to Vanya and the unique My Dinner with André, an art-house sensation and critical darling (both Gene Siskel and Roger Ebert included it on their individual lists of the 10 Best Films of the 1980s and were largely responsible for it initially gaining theatrical traction), the collection also contains 2014's A Master Builder, with Jonathan Demme directing Shawn and Gregory in an adaptation of Henrik Ibsen's play.