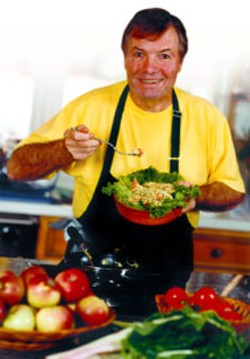 Prior to Donald Trump using the word Apprentice, not many folks in America wanted to be one. Before that show, Mickey Mouse and a thousand mops are what came to mind when we thought of apprentices. Doing the drone's work for a master craftsman for three to seven years? Not many fast-track Americans would buy into that.

However, before culinary schools opened in the US, one of the only ways to gain knowledge of the kitchen was on-the-job training. In Europe, especially France, the system of apprenticeship was well organized. Culinary students planned their apprenticeship carefully, trying to secure a position under a skilled master craftsman.

In his autobiography The Apprentice: My Life in the Kitchen Jacques Pépin writes of his decision to drop out of grade school and become a chef's apprentice at the age of 13. Pépin had grown up during the Second World War in the small town of Bourge-en-Bresse, France, about 30 miles northeast of Lyon. His father had been a cabinetmaker before the war, but was drafted into the French army and subsequently became part of the Resistance after France was occupied by the Germans. To support her three boys, Pépin's mother waitressed in a local hotel, but eventually opened her own restaurant. During the wartime summers, Pépin and his brothers were sent to farms in the countryside. There Pépin gained an appreciation for freshness, the correct season for various ingredients, and the economy of cooking. In one town, Pépin noted the communal sharing of a massive baking oven in which all the town's families baked their weekly bread.

When Pépin decided to drop out of school and become a chef, his parents helped secure a three-year apprenticeship with a well-known local chef at Le Grand Hotel de l'Europe in Lyon. Pépin was required to learn each task thoroughly before he was allowed to move on to the next station, and in some instances he had to stand and observe, like a page turner for a musician, anticipating what the master chef would need next.

He wrote, "I learned at the stove by visual osmosis. Chef did not impart much in terms of specific explanations. Instead, he allowed me to look and imitate. Recipes were immaterial and in any case nonexistent; he wanted me to learn how to cook by using my senses rather than following written or verbal instructions. Sight, feel, hearing, and smell taught me about food."

Pépin soon plotted a course for Paris, a city he had never visited. The apprenticeship program in Paris was organized through a social club, La Societe des Cuisiniers de Paris, which put those seeking positions in touch with chefs who had a need. This was done quickly and efficiently through word of mouth.

In 1959 Pépin moved to New York City and worked for Pierre Franey in Le Pavillion with a salary significantly higher than what he had been paid in Paris. At that time the best rest-aurants in New York were French; Gourmet magazine had a small audience; and the New York Times had not yet developed a special food section. When it did, Pépin became friends with Craig Claiborne, the recently appointed food editor at the paper.

By the end of the 1960s, French chefs in America learned that Nouvelle Cuisine, a revolution in cooking, was transforming French cooking: "Chefs were instructed to obtain the freshest possible ingredients and to create shorter menus in order to focus on a few special dishes. Chefs were also directed to reduce cooking times, especially for fish and vegetables; to avoid, whenever possible, complicated cooking procedures; to investigate regional recipes but be open to preparing them with new techniques and new equipment, such as the food processor; to make leaner sauces; to be mindful of the health of their customers; and, especially, to create new dishes with an open mind to ethnic influence."

Pépin married and had a daughter with whom he would later host a television show. He opted to leave NYC's French restaurant scene to work in the test kitchen of Howard Johnson's where he developed dishes that could be replicated by kitchens across the country. At that time, cookie cutter chain restaurants were just beginning.

During the 1970s he met Julia Child after she published Mastering the Art of French Cooking, quit HoJo's, opened his successful La Potagerie, a soup shop in Manhattan, and went back to school to earn a Masters degree in French literature from Columbia University. He had proposed a doctoral thesis on the history of French food, but was told by his advisor "Cuisine is not a serious artform. It's far too trivial for academic study."

Pépin also taught at the newly chartered French Culinary Institute in Manhattan where he realized that his style of cooking was pushing away from traditional French cuisine. He began writing a series of cookbooks, making several television series, and helped his wife open a short-lived suburban Connecticut French restaurant.

Pépin's autobiography includes 24 recipes including one for his mother's apple tart, which she served daily at her restaurant, the roast leg of lamb Provenal Pépin served to Charles de Gaulle, and Split Pea Soup with Ham and Croutons from La Potagerie.

Pépin's writing is light and easy summer reading. At times he gets bogged down with superfluous stories seemingly added to match photographs of Pépin with celebrities; at other times he flies through a decade. What you'll take away from his autobiography is his extraordinary witness of the past half-century in food: the emergence of modern American cuisine and his memories of the old French apprentice system.

Have a restaurant tip, compliment, complaint? Do you know of a restaurant that has opened, closed, or should be reviewed? Does your restaurant or shop have news, menu changes, new additions to staff or building, upcoming cuisine or wine events? Note: We need events at least 12 days in advance. Fax information to Eaters' Digest: 704-944-3605, or leave voice mail: 704-522-8334, ext. 136. To contact Tricia via email: tricia.childress@creativeloafing.com