The Man In Black and White 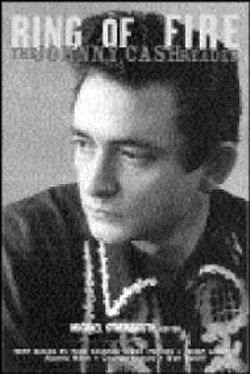 With his ominous black preacher's coat, a God-given bullhorn for a voice, and a face as lined and weathered as the rural America he often sings about, Johnny Cash has cut a near-mythical swath through the American cultural landscape for almost half a century.

The numbers don't lie -- Cash has recorded over 500 albums and 1,500 songs, sold more than 50 million records and earned 11 Grammy awards -- but numbers don't begin to tally the intangible extent to which Cash legitimized country music both at home and abroad.

Consider as well that Cash's idiosyncratic sound made him country's first crossover star, and it seems even more inexplicable that there has never been a collection of writings on Cash before Michael Streissguth's new book, Ring of Fire: The Johnny Cash Reader.

It was "long overdue," Streissguth points out in the introduction, and despite a few minor quibbles, he proves to be a reliable and knowledgeable guide.

Ring of Fire divides Cash's long career into four eras: "Arkansas Train," tracking the first decade of Cash's meteoric rise; "Apogee," the second decade, when Cash became a household name through his best-selling prison recordings and TV variety show; "Legend," a 15-year doldrums during which Cash nearly became a caricature; and "Back in Black," the artist's unlikely return to commercial relevance over the last decade.

The highlights include a lengthy excerpt from Christopher Wren's 1971 biography, Winners Got Scars, Too (now out of print), which recalls Cash's childhood and adolescence on a New Deal agricultural co-operative and the role it played in informing and authenticating Cash's rural sound. In excerpts from his first autobiography, 1975's Man in Black, Cash writes of his older brother's horrific death (a table saw accident) and his own lost years as an out-of-control pill-popper.

A 1985 Goldmine article does an excellent job describing the rockabilly sound that Cash, along with label owner Sam Phillips, created at Sun studio in 1955, as well as the rifts that quickly developed between the two principals. An inmate describes, in a local paper, a Cash visit to his penitentiary in 1971. A reporter for Vogue captures the Cash essence -- "he defies classification by sound, scene or sensibility" -- while a New York Times Magazine feature explains his television show's appeal as the product of Cash's "disenthralled individualism," noting that everyone from "American Gothics" to "dirty-footed hippies" was swept up in the Cash mystique.

Redbook and the New York Times document the extent to which Cash's wife June Carter, and God, helped save the artist from dissolution and influenced his later work. A series of Q&A interviews with biographer Patrick Carr (these excerpts ran in Country Music magazine) plot Cash's career through the late 70s when fewer and fewer people cared -- or wrote -- about the legend.

Nick Tosches' 1995 story, "Chordless in Gaza: the Second Coming of John R. Cash," is the artistic centerpiece of the collection. In this lengthy, crisply written career overview for the Journal of Country Music, Tosches elicited stories from Cash that had never been heard before and captured the Behind the Music-like quality of the country legend's rebirth for American Records, hipster producer Rick Rubin's label:

"Two years ago, Johnny Cash, at sixty-one, was history, an aging, evanescent country-music archetype gathering dust in a forgotten basement corner of the cultural dime museum... (Now, Cash) has suddenly found himself commanding the ardor of the au-courant herd, holding forth, an unlikely Orpheus to pierced ears, on the stages of. . .terminally hip clubs."

Despite some justified criticism about the two Rubin-produced "comeback" albums that followed, Cash -- now 70 years old and confined by autonomic neuropathy to his homes in Tennessee and Jamaica -- emerges from Ring of Fire as a proud, independent yet humble man whom fame has occasionally misguided but never truly corrupted.

There are some pieces in Ring of Fire that don't add much to the overall picture, and the failure to include any substantial coverage of Cash's collaboration on Bob Dylan's Nashville Skyline in 1969 -- which greatly expanded Cash's demographic -- is a glaring omission, especially since a section from Peter Doggett's excellent Are You Ready for the Country would have been a good inclusion. But this collection is a nice place to start for anyone interested in a true American original, as chronicled by the Man in Black and the scribes who wrote about him over the last half century.