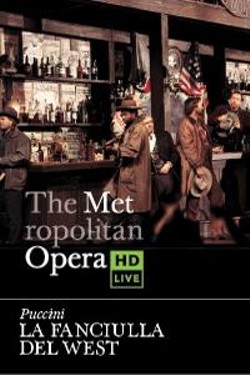 oNCM Fathom brings the fifth season of the Metropolitan Opera's Peabody and Emmy Award-winning series The Met: Live in HD in movie theaters nationwide. The broadcast of Puccini's opera La Fanciulla del West will be presented live for only one day on Saturday, January 8, 2011 at 1 PM ET / 10 AM PT in select movie theaters. Puccini's wild-west opera had its world premiere in 1910 at the Met. Now, on the occasion of its centennial, all-American diva Deborah Voigt sings the title role of the "girl of the golden west," starring opposite Marcello Giordani. Nicola Luisotti conducts.

The Metropolitan Opera: La Fanciulla del West is not showing in any theaters in the area.