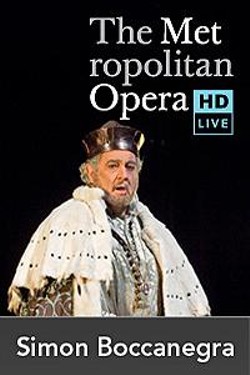 NCM Fathom brings the ultimate stage spectacle - The Met: Live in HD - to movie theatre screens nationwide. The broadcast of Verdi's opera Simon Boccanegra will be presented live for only one day on Saturday, February 6, 2010 at 1 PM ET / 10 AM PT in select movie theatres. Four decades into a legendary Met career, tenor Plácido Domingo makes history singing the title role in Verdi's gripping political thriller, which is written for a baritone. James Levine conducts.

The Metropolitan Opera: Simon Boccanegra is not showing in any theaters in the area.