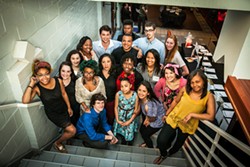 My journey to self-awareness came somewhere in my mid- to late-20s between hangovers, self-imposed moments of demoralization and late-night shifts at a restaurant. Identifying my feelings was impossibly difficult, as was gathering pointed insight into my true character.

You can imagine my surprise, then, when I met a group of teens so incredibly self-aware, thanks to their involvement with The Possibility Project, that they essentially took my grown ass to school.

On a recent Saturday in the basement of the Dilworth Neighborhood Grille, the cast of The Possibility Project, a 60-member ensemble of teens ages 13-19, gathered for their annual pre-performance fundraiser. The national nonprofit, which came to Charlotte in October 2000, empowers teenagers to become young leaders through the performing arts. The teens write, produce and perform a play each year based on issues they struggle with.

The group is celebrating the culmination of the project's 12th season, specifically the upcoming performance of Storm On, an original musical created by the youth-led production team.

Wren Frady, a senior at South Point High School in Belmont, likens the creative process at The Possibility Project to the intensity of turning coal into a diamond.

"It's a lot of heat and a lot of pressure, but in the end we're all bound together through the process," says Frady, 17.

In the beginning of the season — which starts in October and goes through June — the students play an icebreaker called "Cross the Line," in which they ask each other a series of questions ranging from whether they come from divorced families to questions about their experiences with abuse. The game allows the group to begin extracting personal stories that will make up that season's musical.

The production team, comprised of about 15 students, steers the musical's creative process. They select several personal stories to weave together under an overarching theme (this year it's storms). The stories are then turned into a 90-minute musical, performed by the ensemble cast.

During this season's "Cross the Line," an ensemble cast member shared her pain as a rape victim. Convinced no one understood, she lashed out at the group until one of the production team members revealed that she had been through the same thing. It's a moment that happens often in The Possibility Project — honesty and intimate sharing beget understanding and healing.

"We always have to find a common thread," says Morgan Flitt, 17, a member of the production team. "This year, everyone felt like they had to survive."

Participants are regularly pushed outside of their comfort zones.

Auston Scott, a three-season project alumnus, recalls the time he was cast to play a homosexual character with relationship issues. "When it came down to it, it wasn't about gay or straight, it was about the human element of relationships," Scott says.

Conflict within the group — an inevitable outcome of such a diverse crowd — is central to determining the play's material. This year a production team member's issue with pessimism created heated moments with another cast member, which later became the foundation for "Wildfire," a scene in Storm On about the spread of negativity.

Storm On follows a group of storm chasers who are trying to capture the best weather events for a local TV station. Teen issues are reflected in scenes like "Wildfire" and "Downpour," which examines an ugly custody battle.

I ask the production team what they will take away from this season.

Javen Cannon, 17, says he learned to "never try to predict the time line of someone else's growth," while Allen Bosbyshell, 16, says he's "overcome his self-imposed and preconceived notions of the boundary between young people and adults."