The power of words

People are not "illegal," and we will not be defining them that way. 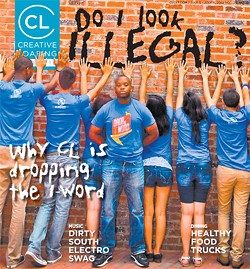 Remember when your mom told you, "Sticks and stones may break your bones, but words will never harm you"? She was lying. Just ask those who have been demeaned, over and over and over, by the n-word, if they are black, or by the f-word, if they are gay, or by the c-word or the w-word, if they are female, or by w.t., if they happen to be poor and white and live in a trailer park. I'm going to write those words here for you to look at and ponder, and then I'm never, ever going to write them again, because they're so hideous: nigger, fag, cunt, whore, white trash.

You don't think words hurt? You don't think they have consequences? You don't think they open the doors to dangerous stereotyping and violence and profiling that have an extremely negative impact on our individual and social psychology? How did you just respond to those words? If you laughed or had no reaction, you might want to look at yourself. If you got angry, good. You should have.

Several years ago, Creative Loafing made one of the worst typos you could imagine. In a blurb about a Latino festival, we wrote about how the artists would be "spicing things up" — only, somehow, a "k" was inadvertently typed into the word, turning "spicing" into what looked like an offensive racial slur.

In my editor's note the following week, I apologized for the gaffe and used the opportunity to talk about the power of words: "At Creative Loafing, we strive to use words that are beneficial and sympathetic, not harmful or hateful. Sure, we get snarky with public officials and policies we believe adversely affect our community and world. And we'll rip into an artist who issues an overpriced CD, book, film or theater event that doesn't live up to its hype. That's what we're here for. But the intentional use of language contrived to cause pain is antithetical to our core values."

In October of last year, the Society of Professional Journalists passed a resolution promising to discontinue use of "illegal alien," although the venerable group stopped short of promising not to use "illegal immigrant," suggesting only that it would re-evaluate its implications. After much discussion and contemplation, we at Creative Loafing Charlotte have decided to stop using "illegal" at all times when describing human beings of any status. And we've chosen to make it official by joining the "Drop the 'I' Word" campaign — by taking a pledge not to use the word "illegal." In this issue's cover story, news editor Ana McKenzie explains our position, and contributing PunditHouse commentary writer Anthony W. Hager, who disagrees with CL's position, debates her. We hope this will foster more such discussions.

Many things are illegal — murder, rape, driving while impaired, selling drugs — but human beings aren't. Simply living in a country without proper documentation does not make a person any more of an "illegal" than a driver without a license is. People are not "illegals," and Creative Loafing Charlotte will not be defining them that way. We promise.