The rise of the pop-up dinner

Underground meals step out of the shadows 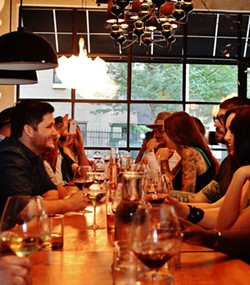 I had been chasing the white rabbit, an elusive caravan of dinner gatherings that I happened upon in my Facebook feed, for a few months. Every so often, photographs of mysterious dinners surfaced, filled with beautiful, eclectic and fashionably inked attendees. The only information I could glean came from a curious crest bearing a rabbit and a tagline that read, "Eat me, Drink me." I had discovered the Cheshire Dinner Society, an underground supper club, and I wanted in.

The Cheshire Dinner Society is just one of the "pop-up" dinner concepts dotting the Charlotte foodscape. Characterized by unexpected locales (often kept secret until the last minute), inspired menus and mystery, these "pop-up" dinners take a guerrilla approach to dining. Underground dining offers guests a welcome departure from the traditional restaurant experience for something a bit more exciting and, perhaps, exclusive.

And, just like a colony of buck-wild rabbits, the concepts are multiplying and the Charlotte "pop-up" scene, once occupied by a few creative souls, is growing.

Since the early 2000s, underground dinners have been whetting the appetites of adventurous eaters in cities across the nation, from the famed Wolvesmouth dinners in L.A. to the up-and-coming Blind Pig Supper Club in Asheville. Dinners, originally held in private residences, have spread out to old warehouses and even restaurants. Strangers gather for an experience, a multi-course meal rooted in a chef's whim. Undisclosed locations, cliffhanger menus (usually, guests don't know what will be on their plates until it lands on the table) and a select bunch of guests are the hallmarks of a proper subversive meal.

In early 2012, the Cheshire Dinner Society stepped onto the scene as Charlotte's fledgeling underground dinner society.

"For us, Cheshire was a labor of love," says Courtney Lynch, one half of the husband-and-wife duo behind the Cheshire Dinner Society. Her husband, Jamie Lynch, executive chef at 5Church, captained the courses and Courtney, the guests. In its early days, Courtney, called a master curator by her friends, meticulously arranged dinner guests like a florist does a bouquet. Pretty soon, interest grew and Cheshire opened its doors to the public for the first time this year for a candlelit affair held in the basement of the old Hotel Charlotte (now Leroy Fox).

Caroline Cook-Frers, owner of local boutique The Frock Shop and a pop-up dinner veteran, says the allure of these concepts comes from the unexpectedness of it all.

"Usually, the fun of a pop-up dinner lies in making something happen that wouldn't normally happen otherwise," says Cook-Frers. "And, I haven't been to a pop-up where the chef wasn't intricately involved."

In fact, pop-ups are just as much a draw for the chefs as it is for the guests. Susanne Dillingham, aka The Tiny Chef, and Craig Barbour, executive chef of the Roots food truck, created an underground restaurant called Pork, Stock and Chocolate, which held its last underground dinner on Valentine's Day inside Atherton Mill Market. For them, pop-ups present a unique and welcome challenge.

"There is nothing to hide behind; if it goes poorly we only have ourselves to blame," Barbour says. "It is that great responsibility that drives us to push the bounds of creativity and innovation — to make the night unforgettable for those participating."

Dillingham and Barbour's operation delights in the mystery, intimacy and surprise of each dinner.

"I think people like the exclusivity of it," Barbour says.

Other concepts in town aim for more of a community feel. Take Richard Gruica's monster meetup group, Good Eats and Meets, a social dining network over 4,000 strong in Charlotte. For Gruica, his primary motive isn't exclusivity, but an "old-school pace." His European roots drive him toward the slow enjoyment of breaking bread with others, whether it be in an experimental dinner in the dark or a beer-tasting adventure.

"We're all about community," says Joe Haubenhofer. Joe and his brother, Conor Merrigan started Relish Carolina in summer 2012. Their dinners eschew the typical small, mystery group for larger gatherings, open to the public, averaging about 100 people per event. For Haubenhofer, Relish dinners are anti pop-up, though he believes they achieve an equal level of intimacy by incorporating experiential activities, family-style food and plenty of booze.

More events are popping up too. While writing this story, I uncovered three more concepts currently in the works. Whether inclusive or exclusive, above ground or underground, one thing is for sure — the Charlotte dining scene is alive and well.