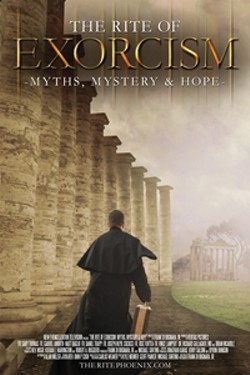 A fascinating yet academic look at one of the most talked-about and misunderstood rituals: The Rite of Exorcism. Told from the perspective of those who face demons and evil spirits daily, exorcists from Italy, Spain, and the United States share what they've learned about evil and the massive increase in people reporting some kind of personal demonic influence. Sweeping recreations based on actual events and candid interviews tell not only of the widespread modern influences of evil but also offer great hope to those who wonder who will ultimately win the battle of good and evil. The film features Fr. Gary Thomas, the exorcist who's life was featured in the Warner Brothers film The Rite starring Anthony Hopkins.

The Rite of Exorcism: Myth, Mystery & Hope is not showing in any theaters in the area.