The Voluntourists: J.D. Lewis and sons 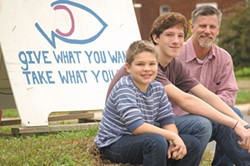 When J.D. Lewis was a kid, he loved watching Mutual of Omaha's Wild Kingdom on television. The nature show made him wish he could travel to Kenya. Years later, when his then-13-year-old son Jackson announced he wanted to help others, Lewis, 54, was reminded of his childhood dream.

He decided to take Jackson and his other son Buck (who was then 8) on a trip around the world. But there was a twist: They would visit seven continents, 12 countries in 12 months, all while volunteering.

Lewis founded the Charlotte-based nonprofit Twelve In Twelve in February 2011 to increase awareness for the trip and to raise funds through donations, company sponsorships and a 12K race in Charlotte. He also started a travel blog on the organization's website. Lewis asked the Peace Corps to help him pick parts of the world that needed volunteers but were safe for a family to visit. The list included Russia, China, Thailand, India, Rwanda, Tanzania, Kenya, Australia, Antarctica, Argentina, Peru and Haiti. Then, he picked an issue important to each country, including HIV/AIDS prevention, education and rebuilding after genocide, and connected with a charity organization in each country.

Lewis spent his teen years surfing in California and eventually became an actor, appearing on TV shows like Friends and ER and mingling with celebrities. But he always yearned to lose the superficiality in his life and be a dad. He adopted Jackson and Buck when they were babies and moved to Charlotte five years ago.

"I wanted to prove to my kids that great ideas can happen," he said.

Lewis and his kids, who were home-schooled before the trip, had to mentally and physically prepare for the trip that started in July 2011 and ended in August of this year. It was a tough challenge. After all, last summer, Lewis was grieving the sudden passing of his aunt and uncle, who raised him after his parents died; he also underwent surgery to remove a cancerous melanoma on his lip. In late May, he moved his family out of their three-bedroom Plaza Midwood home and into a one-room apartment with no air conditioning for about two months to get used to sharing close quarters abroad.

In Kenya, they spent time in Kibera, Nairobi's largest slum, to shadow social workers with the Health Education Africa Resource Team Foundation, which helps victims of the HIV/AIDS pandemic across the continent. They followed relief workers through a neighborhood where people with illnesses like tuberculosis lived in shacks with tin roofs, dirt floors and soiled curtains. On one visit, a 4-year-old girl sat in Lewis' lap and urinated.

The family also had the opportunity to work with animals. At the Elephant National Park in Chiang Mai, Thailand, Jackson and Buck walked, washed and fed elephants, an endangered species. They also worked with members of The Refugio de Monos in Argentina to rehabilitate howler monkeys.

The most dangerous part of the trip came during a layover in Cairo. Lewis realized his hotel was on Tahrir Square, where violent revolutionary demonstrations occurred only days before his arrival with the kids. Blood still stained the streets. One day while walking around the city, someone tried to kidnap them. Buck said that's when he was ready to go home. Jackson, though, never wavered.

"I never really wanted to go home," Jackson, who's now 15, said. "I never felt like I wanted the trip to stop."

When the family returned to the U.S. in August, they spent one month in Durant, Miss., to document poverty in America before resuming a regular routine in Charlotte. The kids went to public school while Lewis returned to work at the Actor's Lab, his coaching business.

Twelve In Twelve is still a part of their lives, as they plan to release a documentary of the trip. They're also launching a Web campaign Dec. 12 (12-12-2012) to encourage other families to volunteer either locally or internationally.

"We wanted to go out and see what we could do to make a difference, and that was our goal," Lewis said. "What it ended up becoming was a magic carpet ride. Every place we went, something magical happened."