The World's End: See it before it's too late | Reviews | Creative Loafing Charlotte
Switch to the mobile version of this page.

The World's End: See it before it's too late 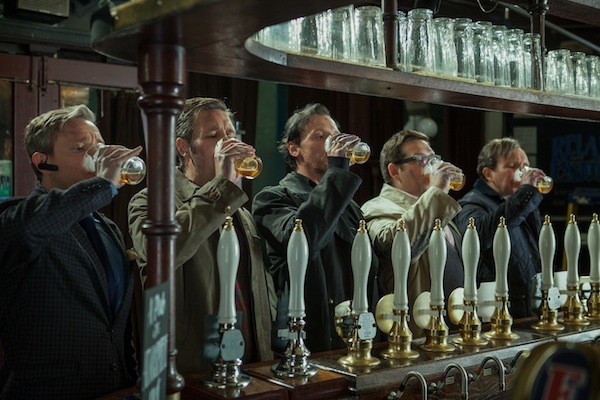 The World's End is one of those comedies that's so uproarious as it sets up its premise and establishes its characters that it's almost a shame when the story proper gets underway and breaks up the heretofore nonstop merriment.

The third picture from the Shaun of the Dead / Hot Fuzz team of writer-director Edgar Wright, writer-star Simon Pegg and co-star Nick Frost, this begins in flashback mode, as five childhood friends attempt an epic pub crawl through their small British hometown, eventually falling short by three bars. Cut to 20 years later, and the lonely and immature Gary King (Pegg) decides that nothing would give him more satisfaction than reuniting with his mates and giving the crawl another shot. His four friends, though, have gone on to lead lives with real responsibilities (job, family, etc.), and it takes a lot of begging and lying on Gary's part to convince Andy Knightley (Frost), Steven Prince (Paddy Considine), Oliver Chamberlain (Martin Freeman) and Peter Page (Eddie Marsan) to leave London and return home simply to bar-hop. They instantly regret succumbing to his pressure, as his boorish behavior reminds them why they drifted apart in the first place. It's only when Gary heads to the loo and encounters a surly teen that it becomes obvious their bickering is the least of their problems.

The early going of the film is terrific: Pegg delivers a wonderful, wide-eyed performance as a sad sack living in the past, and his character's relationship with the other four men yields no small measure of laughs. This material is so strong that it's almost a shame when the science fiction angle takes over following that bathroom encounter between Gary and the young lad. There's still a generous amount of humor running throughout the rest of the picture, but whenever Wright and Pegg allow the worn-out premise (think Invasion of the Body Snatchers) to dominate the conversation, the movie feels like a — pardon the pun, please — clone of so many others. Still, for a movie that was released in the dead-zone period of summer's end, The World's End offers a good measure of fun out of the sun.