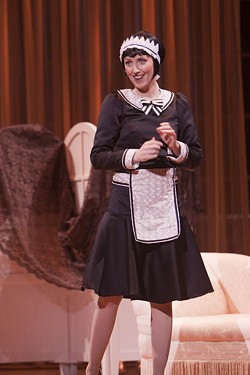 Opera Carolina hasn't presented Mozart's Cosi fan Tutte since 1994, and the lukewarm turnout for Saturday night's opening performance did not signal any great eagerness for the comedy's return. Perhaps if our city's battalions of Boheme partisans had been notified of the backstage drama that preceded final rehearsals before opening night, tickets might have sold more briskly. Before the curtain went up, it was announced that the lead tenor, Robert Mack, wasn't feeling well. He would perform the role of Ferrando, but it was probable that he wouldn't sing it all. When and if he were spelled by Jason Karn, the substitute would join Op Carolina conductor and artistic director James Meena in the orchestra pit.

Ironically, Mack was involved the last time an event like this occurred — as a no-show five months ago when he was slated to sing Sportin' Life in the touring version of Porgy and Bess that ended Op Carolina's 2009-10 season. His replacement, Reggie Whitehead, sang Act 1, and Sean T. Miller stepped in for Act 2 when Whitehead said he was sick.

Awkward as that mid-performance substitution was, it was preferable to the lip-syncing spectacle that marred Act 2 of Cosi. As fruity and resonant as the Charlotte Symphony sounded from the pit, Karn sounded like he had been tossed down a well. Although Karn and Mack both diligently followed Meena's baton, producing near-perfect synchronization, there was never a convincing illusion that Mack was actually singing. In duets with Ferrando's friend Guglielmo, while they are testing their fiancées' fidelity to win a bet against the worldly-wise Don Alfonso; or in duets with Fiordiligi, the friend's fiancée whom Ferrando is wooing in a wild Arabian disguise; interaction between the mute, lip-syncing Mack and his partners was bizarre. Or like some perverse ventriloquism.

Some of that weirdness might have helped Act 1, largely inert until the climactic Scene 4, where the wanton housemaid Despina disguises herself as a wonder-working physician to dupe the sister fiancées, Fiordiligi and Dorabella. Until then, we laboriously erect the set-up: the heroes' bet with Don Alfonso, the men's bogus departure, the transformation of Ferrando and Guglielmo into lurid Albanians, and their instant professions of steadfast love for the ladies who have bidden their fiancés adieu just moments ago. Stage director Bernard Uzan barely lightens the tedium, as scenic designer Brian Perchaluk (abetted by wig designer Martha Ruskai) whisks us to a Jazz Age locale with an elegant wicker set and stairway.

When the disguised Albanians take poison to end their lovesick misery and the disguised Despina brings an elaborate magnetic device onstage to cure them, we finally start getting some broad comedy action. Meanwhile, the music is always wondrously inventive, luscious when it isn't simply invigorating. Mack's difficulties surfaced painfully late in Act 1, before Karn came to his rescue, in the challenging "Un' aura amorosa" aria. Fortunately, soprano Caitlin Lynch is a constant joy as Fiordiligi, far more relaxed and delectable than she was in her 2006 debut at Belk Theater in Don Giovanni, and Kristopher Irmiter, who played the Don so dashingly back then, is nearly as devastating as Alfonso now.

Marian Pop improves dramatically as soon as he throws off Guglielmo's military livery and immerses himself in the Albanian's beard and silks, so his debut is slightly more auspicious than mezzo Elizabeth Stannard's as Dorabella, which needs to be far more red-blooded. Both debuts are upstaged by Sarah Callinan's maiden voyage as the shape-shifting mischief maker, Despina, physician in the climax of Act 1 and notary in the Act 2 denouement.

Patience is advised as Cosi reprises this Thursday. The Act 1 comedy does rise to a pleasing froth if you stick with it, and Act 2, with Mack or Karn constantly onstage as Ferrando, will surely improve.