Something is dancing in Denmark 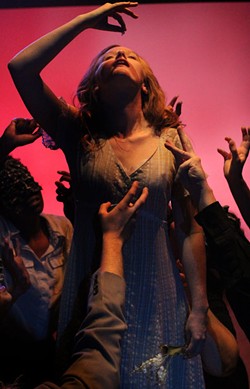 Theater is the only art form that uses the same word for what its practitioners produce and the place where they produce it. Little wonder that theater companies yearn for a place of their own and, when they find one, tend to settle there. Few of our local companies have moved from place to place with each successive new production — Chickspeare and Moving Poets spring to mind — and fewer tour different venues with the same production.

The new Taproot ensemble joins Children's Theatre's Tarradiddle Players in that thinly populated category with their current Ophelos tour. On Sunday, I caught the last performance at Piedmont Unitarian Universalist Church. This coming Thursday, Friday and Sunday evenings, they'll be up in Cornelius at Kadi Fit, and skipping ahead to April 25-27, they'll return to UpStage in NoDa.

What you get with Ophelos, an Ophelia-centric retelling of Hamlet, is very much like the productions we used to see regularly from the Moving Poets, for the texture of Ophelos — with Camerin Watson as Ophelia and Alexander Windner Lieberman as Prince Hamlet — can comfortably be labeled as a theater of dance. Not only do theater and dance intertwine in unfolding Ophelia's tragedy, as they always do with Moving Poets, there's also a quartet of live musicians playing throughout the performance and a constant layer of video.

Yet the scale of Ophelos is unmistakably smaller and the Taproot approach is noticeably more immersive. The projection screen is hardly larger than a pair of French doors and the performing area is hardly wider than the screen. Seated at tables, the audience flanked this narrow space.

At an early moment in a lighter episode, patrons were personally invited to join ensemble members in a ballroom dance. Before that, flowers in the vases on our tables were gathered to form a bouquet that Hamlet gives his beloved. Smell them but don't eat them, he tells her. Uh-oh. Ophelia doesn't answer. In fact, she's the one key character who never says a word. But Watson is sufficiently beauteous and eloquent as a dancer to tell you all you need to know.

The script of Ophelos is cobbled together from processed and modernized scraps of the Elizabethan original, least altered when the Prince encounters the ghost of the dead King Hamlet, his father. At the same time, the storytelling is severely condensed, not quite reaching 60 minutes. All this is done quite deftly. There is no play-within-a-play to serve as a litmus test for King Claudius's guilt. We fast-forward to the aftermath, when Hamlet confronts his mom privately.

Here is where the story is collapsed most audaciously, for in the Taproot version, it's Ophelia's brother Laertes who is lurking behind the arras. Polonius? Like Rosencrantz and Guildenstern, Horatio, Yorick and the gravedigger, he's missing in action. This really is as much about Ophelia as it is about Hamlet.

Lieberman's handlebar mustache instantly reminded me of the Victorian take on Hamlet by Charlotte Shakespeare in their 1988 production. With Brian Willard delivering an Edwardian aura to King Claudius, those antagonists were also nicely matched. As Laertes, James McClain opens us to the idea that he might be Ophelia's younger brother, mostly cordial to Hamlet in this freshened scenario. Troubled and dissembling as he is, Hamlet has issues with most of the Danes, and Lieberman carries them all off well. He is actually silhouetted behind the projection screen in his showdown with Queen Gertrude, done with a cool veneer by company co-founder Brianna Susan Smith.

Of course, Hamlet doesn't stab through the screen to dispatch the snoop, but the video is lurid enough at this moment to get the point across. The screen also comes in handy during one of the murdered king's appearances, with an uncredited former Theaterperson of the Year playing the ghost.

There is much uncredited creation going on as a result of Taproot's collaborative methodology, so the playbill — or is that playcard? — won't tell you who's responsible for video, choreography, musical composition, stage direction or even authorship. The play's the thing, and if Ophelos is indicative of the results we can expect, Taproot's group effort will shake things up in Charlotte and beyond, demonstrating unique ways of creating and presenting vital new plays and choreographies.