Quadruple twins on the day after 9/11 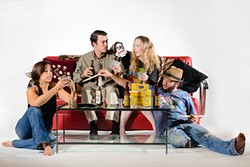 Incredible good fortune collides with incredible misfortune in Craig Wright's Recent Tragic Events, now playing at Carolina Actors Studio Theatre in a provocative Metrolina premiere. Or perhaps, since this playwright is nothing if not playful, fortune and misfortune are two sides of the same coin.

Andrew is a bookstore manager at the Twin Cities Airport, recently returned from New York. Set up by a mutual friend, Andrew arrives at Waverly's apartment for a blind date just as she's emerging from the shower. He is instantly stunned by her appearance, but his amazement grows as he surveys her bookshelves while waiting for her to dry and dress, almost to the point of panic. All the books are books that he loves, including a trove of Anthony Trollope's novels and, amazement of amazements, seemingly everything written by his favorite author, Joyce Carol Oates.

On top of that, we soon learn that Oates is Waverly's great aunt and will be paying her a visit later that same evening! Yet here is one of the places where we collide with incredible misfortune. It is the evening of Sept. 12, 2001, and the only reason Oates is in the Twin Cities is because her flight to New York was diverted by the repercussions of 9/11 the previous morning. The connection between the Twin Cities and the Twin Towers goes much deeper, it turns out, for a key reason why Andrew is stunned by Waverly's appearance is because he happened to meet her identical twin sister Wendy on his recent trip to New York.

More than 24 hours after the attack, Wendy still hasn't been heard from. It gets worse, but I'd need to issue a spoiler alert before I told you how.

So where does that coin come in? Actually, before the action begins. Stage manager Devin Clark asks for an audience volunteer to flip a coin. Much in the same way that audience responses determine which of multiple endings will be performed in Rupert Holmes's 1985 adaptation of The Mystery of Edwin Drood, the outcome of the coin toss determines which of two scripts the actors will perform. At key moments, we will hear a chime indicating spots where there are two alternatives.

But wait a second. How can there be a second chime after we've heard the first? Does the script revert to its original form after each breach, rendering the alternatives meaningless, or do the possibilities really double each time the chime sounds, to approximately the 40th power by the time we get to intermission?

Before the start of Act 2, Clark reappears to explain the whole coin thing — and who Joyce Carol Oates is and why the hell she's being portrayed by a sock puppet. On opening night, exactly 12 years after the events unfolding onstage, Clark sat down between me and Observer reviewer Lawrence Toppman with the script in his lap to substantiate his veracity, pointing to the words he was saying as he said them.

Pretty historic, I'd say, and triple meta. The Oates explanation is a simplified riff on the playbook created by Borges in his celebrated metafiction "Pierre Menard, Author of the Quixote," and Clark himself is meta, since the real stage manager, Amber Westbrook, is listed in the playbill with the creative team while Clark is grouped with the cast (Westbrook and Clark are also teammates operating lights and sound). And since Larry and I both participated in the action, vouching for the authenticity of Clark's claims, our reviews are pretty meta as well. There's more to come before the last blackout.

Wright juggles several themes as Waverly becomes more and more concerned about her twin sister. Before we meet Joyce, Waverly's musician friend Ron barges in, raids the fridge, and opens — then denounces — the bottle of wine Andrew has brought for the occasion. He is a fount of gaucherie, perving after Waverly even after he gets the picture, and launching into rants as twisted and unexpected as an Eric Dolphy solo. Looking at the TV, he is able to see the spectacle of 9/11 as the inevitable result of America's ongoing hubris. Such doctrines of predestination are anathema to Joyce, a somewhat tipsy champion of free will after a drinking game breaks out in Act 2.

While this philosophical question was still hovering in the air when this play opened in New York in 2003, Wright was also exploring a psychological question that can also be deeply troubling. As alike as Andrew and Waverly are, both show strong inclinations to reject each other — precisely because they're too good to be true. If this aversion is as hard-wired into us as the horror we feel toward atrocities like the attacks on the Twin Towers, that might be a key to the mystery of why such things happen.

Except for Clark, who made his CAST debut back in March as the nerdy half of a Midwestern rap duo in How We Got On, all of the cast members are Charlotte newcomers. Despite their unfamiliarity with Charlotte, the CAST space or each other, director Michael R. Simmons has them clicking on all the dimensions and meanings Wright packs into his comedy-drama.

The romantic drama is in fine hands with Elizabeth Byland and Jack Utrata as Waverly and Andrew. Byland beautifully shoulders the onus of ferrying us back to the disorientation we all felt when, with a whoosh of smoke, the Twin Towers became Ground Zero, then taking us further into the vortex of the horror experienced by the innocent victims and their families. There are strikingly irrational moments in this bold yet never histrionic performance. Utrata might be taking us over the edge as Andrew in terms of the tentative wishy-washiness we can accept in a bookstore manager or a worthy mate for Waverly, but I was able to cut him ample slack under the extraordinary circumstances of 9/11, which for him include almost literally seeing a ghost.

Will Triplett and Emily Paige Ussery seem to deliver all the comedy, though a good amount of what they say merits serious consideration. Ussery actually doesn't say anything for a long time, entering as Ron's zombie slut girlfriend, Nancy. Her exploits with the Oates sock puppet are more noteworthy, particularly her meta farewell to Nancy. Perfectly embodying the happy-go-lucky pothead cynics who have roamed our streets for nearly 50 years, Triplett turns Ron into a lovably ludicrous American Superman, able to spout elaborate philosophies without the benefit of extensive study or thinking.

The set design by James Edward Burns, with doors at three corners of CAST's arena stage and Waverly's kitchen in the fourth, seems perfect for the Pirandellian ending of Recent Tragic Events. No one in the Twin Cities can do anything about what has happened to the Twin Towers, so the evening's suspense eventually congeals around whether Waverly can get around what might have happened to her biological twin and unite with her spiritual twin.

And there's a second lingering question, less urgent for us all than it was 12 years ago, but still unanswered: Where do we go from here?