Exquisite Charlotte cuisine by the wharf 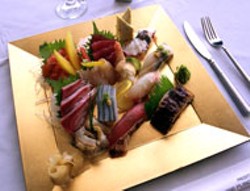 Occasionally, I've gotten calls from out of town food show producers who ask where the best restaurant is by the wharf. I hate that CH confu-sion. "No, that's Charleston," I tell them. But honestly, I miss a wharf more than anything else here -- well, except a patisserie. Pike's Market. Fulton Street. These are fond memories.

People have complained here about the quality of many sushi outlets. The fish is not fresh enough. The fish is too common.

Not any more. At the recently opened Restaurant "i" Japanese Fusion Cuisine, located in the former Mangione's in Dilworth, one owner hand selects the fish from the Fulton Fish market in New York or has his agents in Miami and at other wharves air freight the fish into Charlotte.

The restaurant was named by one of the owner's daughters. The "i" is from the Japanese word ai, which means love. What I look for in a restaurant is the chef's heart. Typically, if I can taste that passion that a chef creates, then I've found a great spot. But these places always seem to be quicksilver.

Chef and co-owner Masanori (Massa) Kokubu said, "Owning a restaurant has been my dream from the beginning." Chef Massa, who is a native of Tokyo, trained at a young age with two of Japan's "Iron Chefs" in classical French cuisine. He was offered the chance to cook French cuisine in the Westin Prince Hotel in Toronto, Ontario, which is owned by a Japanese group. There, he began as a French chef in their continental dining room but soon decided to revisit his roots. This Westin featured a large Japanese restaurant with teppenyaki tables, tatami rooms, sushi and robata bars.

Kokubu spent years perfecting each station. Frequent customers to the sushi bar where he worked were entrepreneurs Rommy Iwata and Nobby Takahashi, who decided to open a restaurant with Kokubu. They first looked for locations in Manhattan, but the rents were too high. Then a golfing buddy told them about Charlotte.

The 70-seat restaurant opened in July. Kokubu got the kitchen up to speed and then brought on Ron Gale, a graduate of the Culinary Institute of America, to work with him.

The restaurant's urbane interior is white, light and full of movement: Steel beads swing, light flickers, servers buzz by. The result is a vibrancy that will play out again on your plate. The only downside to the interior is the hideous view of the driveway from the dining room, thinly veiled by sheers. This is the kind of place that shouldn't be under wraps.

Most of the menu is typically Japanese: miso soup, sushi-maki rolls, sashimi, tempura. But it also offers a few uniquely named dishes: Moonlight Salad, Smile of the Gourmand, Seafood Symphony and The Idyllic Picture of Japan. If you can say, "I'll have the Idyllic pix and she'll have the Smile," my visor's off to you.

The wine list is brief and fate stepped in since our choice had been eighty-sixed. More midrange whites would be helpful.

I toyed with the idea of ordering the Chef's sashimi platter. "You trust this guy?" my dining companion queried while reading the menu and nibbling on an edamame pod. I shrugged my shoulders. That would have to be the test. After all, Japanese restaurants should be judged by the immaculate quality of their fish.

The sashimi platter was large and took up most of the center table. Tuna, fluke, salmon, yellowtail and snapper bobbed against a tide of shaved radish. We downed the mackerel like a shot of ocean mist. The pungency of the ocean rolled through our mouths. This dish is a sure thrill for sashimi lovers. Charlotte, take note.

The kitchen's talent is to reach into the dish to reveal the primary flavor in a big way. The sleek tataki appetizer is thin folds of melting prime sirloin beneath a ribbon of aioli resting in a pool of ponzu. The architectural i roll gets a hearty boost from the seasoned tuna pressed against the mellow avocado and tempura, and a crunch from the slivers of celery, cucumber and red bell peppers.

The seared tuna starter has faintly layered flavors of olive oil and ponzu. The result is something you can't quite put your finger on. Olive oil? Then the halibut entree with a cream sauce arrives. You knew it was a Japanese restaurant, so the French influence is unexpected, but evidently very Japanese a la "Iron Chef." The halibut, complete with dainty baby carrots and grilled vegetables, doesn't miss a beat. Don't get me wrong: It just seems strange to follow the clean tastes of sashimi with a cream sauce. But then again, what's the last delicious Asian-inspired dessert you've had?

Nevertheless, Chef Massa's foods are exquisitely prepared with sushi and sashimi presented in pristine glory, no gimmicks. Restaurant i is an oasis of culinary verve in a city where culinary guts are not often rewarded, the kind of place you can effortlessly fall in love with.

Have a restaurant tip, compliment, complaint? Do you know of a restaurant that has opened, closed, or should be reviewed? Does your restaurant or shop have news, menu changes, new additions to staff or building, upcoming cuisine or wine events? Note: We need events at least 12 days in advance. Fax information to Eaters' Digest: 704-944-3605, or leave voice mail: 704-522-8334, ext. 136. To contact Tricia via email: tricia.childress@creativeloafing.com.