From grandma's kitchen to steakhouse 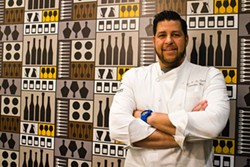 Oscar La Fuente didn't always know he wanted to lead a culinary life. His dad used to own a carpentry shop, and La Fuente thought he was destined to join the family business. But after just three years of whittling wood, he decided he couldn't see himself in that profession for 40 years and turned instead to cooking. He started taking culinary classes in Toronto, only to realize he was already well ahead of many of his classmates. Apparently, his food smarts (picked up from cooking with his grandmother in Peru) and common sense proved he had found his niche. He actually won a Canadian Black Box Championship (a cooking competition similar to Iron Chef) during his college years, concocting an award-winning meal of seared chicken with potato rousse.

Under the instruction of a variety of influential chefs, La Fuente learned his recipe for success — hard work and communication. He started his culinary career in the restaurant world, working at a chain restaurant (Olive Garden) for just one week before delving into fine dining, then moved into the hotel and convention center food scene with aspirations of having a family life. At one point, La Fuente worked almost seven days a week, 16 hours a day to garner The Umstead Hotel and Spa a spot as North Carolina's first Five Diamond Hotel in just four months.

Today, he balances a plateful of responsibilities as the executive chef at recently opened Evoke, a steakhouse nestled inside Le Méridien (555 S. McDowell St.). He prides himself on being a friendly chef who values contact with his staff on the regular. When asked what's next, he says corporate — designing kitchens and checking up on other chefs.

Creative Loafing: Your grandmother was your first connection to the culinary world. What is your fondest memory with her?

Oscar La Fuente: I used to love going to the market because we had so many open fresh markets that you can, at the beginning of the market, go and pick your live chicken and by the time that you come out, you pick it up in a bag as fresh as you possibly can. I remember those memories with her, going to a market and shopping with the best, freshest products that we could get.

Growing up in Peru, I'm sure your idea of comfort food is a bit different than mine. What food gives you the warm fuzzies and reminds you of home?

Jalea, which is a whole fried fish and a whole bunch of seafood mixed into it. And everything's fried. We used to live 10 minutes from the ocean, so going to the ocean every single day during the summer and you go to these little shack restaurants and you're hungry, that's what you get. It's full, it's cheap, and it's delicious.

You cook every day on the job, so I'm sure you make a mean family dinner, but do you do a lot of cooking at home for your family?

My wife laughs at that too because her friends always ask her, "He cooks at home?" and she goes, "he doesn't." I only cook pretty much on holidays or when we have family over, and we have pizza night or pasta night and my 10-year-old helps me to make fresh pasta and fresh pizza dough and everybody else does their own stuff. So those kinds of things we do as a family, but I don't really cook as much as I should.