Where to get that staple of Southern cuisine 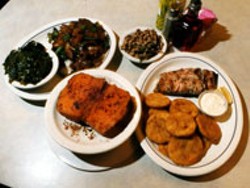 Many suffer from an unfamiliarity of "Meat and Three" eateries. These folks are probably new to the South or new to this part of the South and just grew up neglected. Meat and Threes are to Charlotte what a Blue Plate Special diner is to much of the country, similar to the quintessential Route 22 Jersey diner. Not that these Southern eateries share a similar ambience: Most are bare bones and a little shabby around the edges. However, they do share a similar mindset: It's where the locals go to get homemade food.

You may have driven past these cafes, perhaps noticing such idiosyncratic signage as "Fresh My Farm Vegetables." Many of the Meat and Threes in Charlotte are owned by Greek families and have been around for decades. Meat and Threes are also a nexus into Soul or Southern country food. In either case, however, the customer base is the same. You can see construction workers and attorneys, politicians and sales clerks.

Meat and Threes offer daily specials that include a meat and sides. These sides are on average vegetables, though rice and mac and cheese are traditionally offered. Nowadays, the trend is for Meat and Twos, but these places are still called Meat and Threes. "I suppose it's still a Meat and Three since we also include a dessert," said Maria Balatsias, daughter of the owner of one of Charlotte's oldest such venues, the Copal Grill.

Typically, the sides include collards, pinto beans, cole slaw, mashed potatoes, field peas, beets, rice, steamed cabbage, succotash and potato salad. Inclusive with the meat entree is also corn bread or biscuits (or both) and usually a glass of sweet or unsweetened tea. Here are a few Meat and Threes around town:

Kids love the fact that banana pudding is considered a vegetable side choice at Gus' Sir Beef Restaurant. Gus Bacogeorge has turned the reins over to his son and daughter (the downtown store is run by another son). The Monroe location is the original site and has set the standard for fried summer squash. Take out is available and they will fax you the menu.Gus' Sir Beef Restaurant, 4101 Monroe Road. 704-377-3210.

Manio Balatsias became a co-owner of the 130-seat Copal Grill in 1965 with Spiro Kalevas. The Copal originally opened in 1947 as a restaurant attached to a motor court and is one of Charlotte's oldest restaurants. Maria Balatsias noted that back then, the Copal Grill, which is near downtown, was not part of Charlotte and in fact had a placemat with directional arrows indicating Charlotte three miles east. All menu items at the Copal are made in-house. Typically, 12 side selections are offered. The daily entrees include two sides and a choice of dessert.Copal Grill, 5923 Wilkinson Boulevard. 704-392-2241.

Also started in 1947 is the Greystone, owned by the Koutsokalis family. A few years back, Greystone closed and then relocated in a new shopping center, but the food has remained the same for decades. Although Greystone is equally famous for breakfast and their oven-baked subs, the Meat and Two keeps this place hopping at lunchtime. Specials and the sides change daily.Greystone Restaurant, 3039 South Boulevard. 704-523-2822.

Another Greek family-owned restaurant is Greg's Bar-B-Q. Owner Greg Kroustalis, a native of Karbenise, became co-owner of Gus's Sir Beef on Monroe Road in the 1980s as well as the former Flamingo Restaurant. In 1994, he bought a 40-year-old barbecue business in Mooresville and duplicated that restaurant in Matthews. In addition to barbecue, Greg's offers daily specials; these are served with a choice of two sides, which include banana pudding, apple cobbler, turnip greens, macaroni and cheese, stewed okra with tomatoes, pinto beans, mashed potatoes, peas, rice and gravy, and potato salad.Greg's Bar-B-Q, 10915 Monroe Road, Matthews. 704-847-5035; 233 South Broad Street, Mooresville. 704-664-4848.