Documentary takes a road trip down singer's past 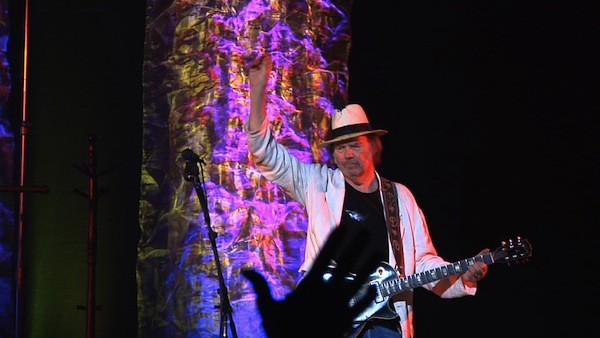 "There is a town in north Ontario," Neil Young quotes himself in Neil Young Journeys, referring to one of his most intensely personal compositions, "Helpless." The town in question is Omemee, Ontario, Young's boyhood home. Tooling around the still sleepy burg in a 1956 Ford Crown Victoria, Young points out his grammar school, the site of his childhood fishing hole and other wells of memory on his way to a 2011 solo gig at Toronto's Massey Hall.

Young's day trip past familiar haunts is intercut with parts of two passionate and powerful sets performed later that same evening and on the following night. Young's on-the-road sound bites don't intro the songs in a strict "set 'em up" sense, but there is an impressionistic connection between journey and stage that is both weird and wistful. Director Jonathan Demme is best known for the serial killer creepfest Silence of the Lambs, but he's an old hand at rock music movies, having helmed The Talking Heads' Stop Making Sense and Robyn Hitchcock's Storefront Hitchcock. Journeys is Demme's third go-round with Young in the realm of docu-concert hybrids, proceeded by Neil Young: Heart of Gold in 2006 and Neil Young Trunk Show in 2009, and his hi-tech, mostly unobtrusive digital vérité approach fits his subject like a glove. When Demme does go gonzo, with micro-cameras on the mic capturing extreme lens fogging close-ups of Mr. Shakey's chin whiskers, it may be a case of too much Neil, too close, but it dovetails nicely with Young's sense of the absurd.

Onstage, Young rips into a set that highlights cuts from his 2010 Le Noise LP, along with 1970s classics like the Crazy Horse collaborations "Down by the River" and "Hey Hey My My," and it's astonishing how much noise one man can make with a single guitar. The solo arrangements are pared down but not skeletal, and they improve the newer material like "Love and War" and "You Never Call," revealing the songs' melodies and unveiling their emotions. But it is on the classics of Young's canon that the soul-baring arrangements are most effective. Switching to organ and harmonica on "After the Gold Rush," Young turns the counterculture chestnut into an old-time hymn, spooky yet achingly vulnerable. Stripped of boomer nostalgia, "Ohio" is a starkly powerful cry of pain and outrage. The pictures and names of the "four dead in Ohio" are displayed on screen, and it is truly shocking to remember that these victims of Nixon's "tin soldiers" were just 19- and 20-year-old kids. Acting as agent provocateur, Demme intercuts archival footage of the 1970 Kent Sate shootings, and the images eerily mirror more recent footage we've seen of the brutal crackdown of militarized police on Occupy members.

Whether he is coaxing heartache with plaintive piano on "I Believe in You," or unleashing a glorious wall of shrieking noise on "Rumbling," Neil Young onstage is a man transfixed. Like a shaman weaving a spell, he seems consumed by the music, barely noticing the audience present in the hall. Indeed, Demme only gives us one glimpse of the crowd, when Young comes out for an unsurprisingly idiosyncratic encore. Unstrapping his guitar at the end of "Walk with Me," Young waves the instrument in front of a stack of amps like a feedback pendulum. And in that spiraling squall of feedback, the artist sets the guitar down, heads back stage and boards the tour bus.

With its emphasis on remembrance of Young's bucolic boyhood, it's tempting to call this project "Neil's Journey through the Past." But Young is one of the few performers of his generation who is ever present. He continues to evolve, still making vital, sometimes hit-or-miss, contributions in his inimical, ragged-but-right manner. Neil Young Journeys is not constrained by linear time. Young's roadside ruminations may pay homage to the past, but that past rubs shoulders with Young's ever-changing song cycle, songs that nod to an uncertain future.

It's fitting that Young hops the bus at the end of Neil Young Journeys, because Journeys is not so much a concert film as both a physical and metaphorical road movie. Young's memories are just as immediate as his journey onstage. Visiting the site of a long vanished boyhood home, Young notes:

Neil Young Journeys is not showing in any theaters in the area.