To the Wonder: Dream a little dream | Reviews | Creative Loafing Charlotte
Switch to the mobile version of this page.

To the Wonder: Dream a little dream 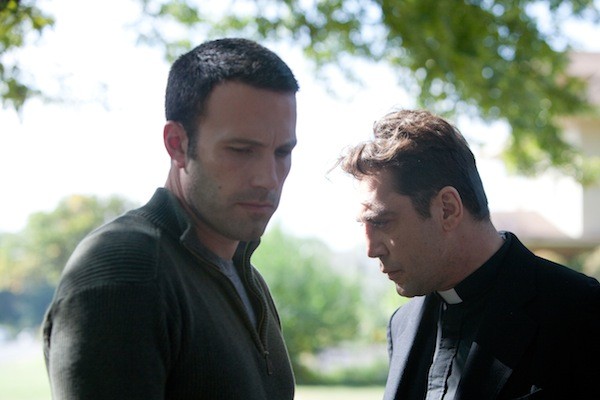 Look, let's just get straight to the point: Chances are that you find the movies of Terrence Malick to be either transcendent cinematic experiences or the most insufferable and pretentious twaddle to ever hit the silver screen. If you're in the latter camp, then there's no point in telling you that his latest work, To the Wonder, will enjoy an exclusive Charlotte run (today through May 2) at Crownpoint Theatre, thanks to the Back Alley Film Series; best to take your dollars and head elsewhere. But if you're in the former camp, then you'll probably want to take a chance on the picture, which indisputably comes off as a minor work on the heels of Malick's The Tree of Life but still holds enough of interest for the initiated.

Ben Affleck, who has more dialogue in any one scene from Argo than he does in this entire picture, plays Neil, an Oklahoman who falls for Marina (Olga Kurylenko) while visiting France. Marina has a young daughter (Tatiana Chiline), and both move to Oklahoma to live with Neil. But boredom and tensions soon get in the way of perfect harmony — as mother and daughter pack up and head back to Europe, Neil rekindles a romance with a former sweetheart (Rachel McAdams). But the story doesn't end there, as circumstances dictate that Marina again comes to live stateside.

Malick movies have all proven to be even better on a second viewing (I'm excepting The New World, which I've only seen once; in my book, it's the lone dud in his canon), as they're mood poems that operate by their own rhythms, consequently offering viewers different sensations and new revelations at various points. Therefore, it's likely that To the Wonder will similarly elevate its standing when put on repeat; for now, though, it feels like a lesser work from the esteemed director, a lovely dream that got placed on the screen before it fully came into focus. Despite the usual charge of Malick producing a boring movie, To the Wonder is anything but — an endless chase scene or CGI-stamped battle sequence (see: Oblivion, A Good Day to Die Hard, 1,000 others) is far more dull to me than any of the sights on view here. With the magnificent Emmanuel Lubezki (The Tree of Life, Sleepy Hollow) behind the camera, even the most seemingly mundane imagery — a woman twirling, a child walking through a grocery store — takes on a luminous aura.

Malick's central focus on a couple struggling to stay together provides sufficient backbone, and the auteur also includes his usual salient musings on the irresistible pull of the natural world and its occasional surrender to the whims of humankind. But he errs in introducing a subplot centering on the Oklahoma town's priest (Javier Bardem), a man who's struggling with his own faith. Try as he might, Malick can't quite tether this to the rest of the picture, and while Bardem is convincing in the part, the overall feeling is that, of all the supporting stories that Malick filmed and then discarded (Rachel Weisz and Jessica Chastain were among the high-caliber thespians relegated to the cutting-room floor), the saga of the doubting man of God just happened to be the one left standing after all the slicing and dicing was complete.

To the Wonder is not showing in any theaters in the area.