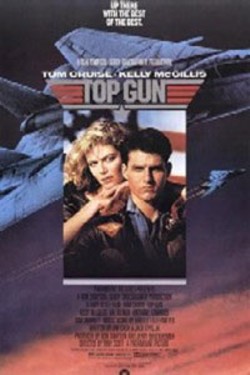 Devil-may-care navy pilot Pete Mitchell (Tom Cruise) is sent to Miramar Naval Air Station for advanced training. Here he vies with Tom Kasansky (Val Kilmer) for the coveted Top Gun award. When not so occupied, Mitchell carries on a romance with civilian consultant Charlotte Blackwood (Kelly McGillis). Shaken up by the death of a friend, Mitchell loses the Top Gun honor to Kasansky. Worried that he may have lost his nerve, Mitchell is given a chance to redeem himself during a tense international crisis involving a crippled US vessel and a flock of predatory enemy planes. The story wasn't new in 1986, but Top Gun scored with audiences on the strength of its visuals, especially the vertigo-inducing aerial sequences. The film made more money than any other film in 1986 and even spawned a 1989 takeoff, Hot Shots. An Academy Award went to the Giogio Moroder-Tom Whitlock song Take My Breath Away. ~ Hal Erickson, All Movie Guide

Top Gun is not showing in any theaters in the area.