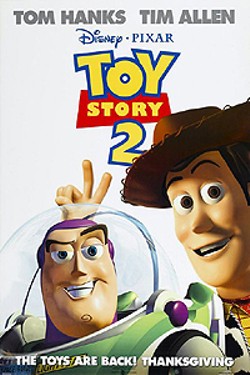 Originally released in 1999, "Toy Story 2" went on to become one of the most popular animated features of all time. The film picks up as Andy is heading off to Cowboy Camp and the toys are left to their own devices. When an obsessive toy collector named Al McWhiggin (owner of Al's Toy Barn) kidnaps Woody, and Woody learns that he's a highly valued collectable from a 1950s TV show called "Woody's Roundup," the stage is set for a daring rescue attempt by the gang from Andy's room. The film introduced such other memorable characters from "Woody's Roundup" as Jessie the cowgirl, Bullseye the horse, and the Prospector.

Toy Story 2 is not showing in any theaters in the area.