Trick And Treat | Reviews | Creative Loafing Charlotte
Switch to the mobile version of this page. 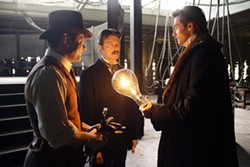 Back in 1944, Universal Pictures decided that the best way to advertise its monster mash House of Frankenstein was by simply trumpeting the picture's all-star lineup on the poster: "Frankenstein's Monster! Wolf Man! Dracula! Hunchback! Mad Doctor!" Given the pop culture icons represented by the performers cast in The Prestige, Touchstone Pictures enjoys the option of doing likewise: "Batman! Wolverine! Gollum! Ziggy Stardust!"

Not that the studio has any need or desire to take such a sensationalistic approach. The Prestige, co-written and directed by the immensely talented Christopher Nolan, is the third of this year's releases centering around magicians (following Woody Allen's Scoop and the Edward Norton sleeper hit The Illusionist), and it's far and away the best. Teaming with his brother Jonathan to adapt Christopher Priest's novel, Chris Nolan has crafted a dense and multilayered drama that explores his usual recurrent themes while simultaneously serving up a cracking good mystery yarn. Like the magicians who figure into the proceedings, Nolan is careful to keep all tricks well up his sleeve, thereby insuring a fantastic finish when everything is ultimately revealed. While The Illusionist unwisely placed all its eggs in one top hat (figure out the twist behind the murder and you've figured out the entire movie), The Prestige works hard to pile on one enigma after another, so that even if you solve one, you might still be unable to grasp the big picture.

Set in turn-of-the-century London, The Prestige casts Hugh Jackman as Robert Angier and Christian Bale as Alfred Borden, two aspiring magicians working under the tutelage of master showman Cutter (Michael Caine). Almost right from the start, it's established that Angier is the more charismatic of the pair: gentle, romantic and extroverted enough to know how to grab an audience's attention. The brooding Borden, by comparison, is more inwardly directed, and his devotion to his craft suggests that he's willing to get his hands dirty and sacrifice anything to realize his dream of becoming a master magician.

A tragedy that occurs during one of Cutter's stage shows closes down the operation and sends both men off in separate directions, with each one harboring nothing but contempt for the other. Cutter, who chooses to remain with Angier, correctly notes that while Borden is the more accomplished artist, he lacks Angier's pizzazz and aptitude for stage spectacle, an angle that's further accentuated once Angier hires a beauty named Olivia (Scarlett Johansson) to serve as his eye-candy assistant. But regardless of whether they're meeting with success or failure (and they each experience a bit of both), Angier and Borden remain obsessed with each other's activities, even going so far as to engage in acts of sabotage.

Matters finally get kicked up a notch after Borden adds a number called "The Transported Man" to his show. Angier creates his own makeshift version of the act, but he won't be satisfied until he figures out exactly how Borden performs the feat. His quest takes him to the distant laboratory of the reclusive scientist Tesla (David Bowie) and his right-hand man Alley (Andy Serkis, LOTR's Gollum), but the truth might rest a lot closer to home than Angier realizes.

In his previous pictures, Nolan took the time to painstakingly explore issues of identity. Memento was all about a man whose amnesia forces him to spend every day reinventing himself as a person, while Batman Begins examined the nature of dual personalities and how circumstances might spur someone to don a mask (both literally and figuratively) in order to further tap into the darkest recesses of the mind. Even Nolan's other past films, Insomnia and Following, dealt in some small way with this theme. In this regard, Nolan recalls David Cronenberg, who has repeatedly returned to the topic of competing identities in such varied works as The Fly, Dead Ringers and A History of Violence. With Cronenberg, however, such explorations generally lead to uncovering sordid truths about human nature -- if a man digs deep enough, he'll learn that the core is rotten. Nolan, on the other hand, finds variations in such searches, believing that people have as much chance of improving themselves as they do debasing themselves. It's this moral uncertainty that provides The Prestige with most of its power, since it allows the characters to evolve in intriguing ways. The movie isn't simplistic enough to pit a "good" magician (Angier) against an "evil" one (Borden); instead, it recognizes the duality of each man's nature, a theme that eventually expands to a startling degree. It can be argued that the story becomes too fantastical for its own good -- it's more compelling when it's rooted in reality rather than when it enters the realm of science fiction -- but except for a nagging final shot, the filmmakers at least take care to cover all their narrative bases with acceptable explanations and believable character arcs.

Because the movie is exemplary on a number of levels -- the production design is immaculate, and the cast members wholeheartedly consign themselves to Nolan's dark vision -- The Prestige doesn't need to live or die solely on the strength of the script's cinematic sleight of hand. Still, the importance of the onion-layered story is so pronounced that I wonder how well the film would hold up if subjected to a second viewing. I'm willing to find out.