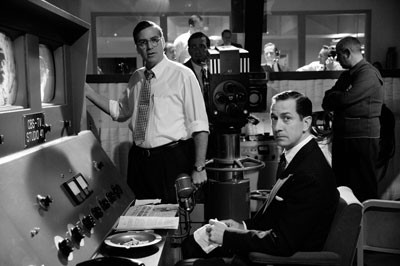 Good Night, and Good Luck. (***1/2 out of four), George Clooney's important new film that's as much about 2005 as 1954, features a veritable Who's Who on both sides of the cast list. There's David Strathairn as legendary journalist Edward R. Murrow, Clooney himself as producer Fred Friendly, Frank Langella as CBS head William Paley and Senator Joseph McCarthy as... George W. Bush? Karl Rove? Bill O'Reilly? One thing's for sure: Clooney makes it abundantly clear that McCarthy is not simply playing McCarthy.

Good Night, and Good Luck., which marks Clooney's second stint as director (he also co-wrote the script with producer Grant Heslov), looks at an inspiring moment in US history, when Murrow, more or less backed by an uneasy CBS, did the unthinkable by standing up to Joe McCarthy, the junior Senator from Wisconsin who was destroying lives left and right by denouncing everyone who didn't subscribe to his petty politics (liberals, the ACLU, Hollywood) as card-carrying Commie Pinkos. The US during the 50s was gripped by a climate of fear, as no one dared speak out against McCarthy or the House Committee on Un-American Activities lest they too be pegged as a Red. But on one fateful evening in 1954, Murrow's highly regarded TV show See It Now devoted an episode to sticking it to McCarthy and his terrorist tactics. McCarthy was allowed to defend himself later on the program, but to little avail: The ball had already begun rolling (even before Murrow's broadcast), and it wasn't long afterward that the Army-McCarthy hearings, featuring Judge Joseph Welch's famous smackdown of the Senator ("Have you no sense of decency, sir? At long last, have you left no sense of decency?"), effectively ended McCarthy's reign of terror and, eventually, this shameful period in American history.

Of course, given that far too many complacent Americans don't care about history repeating itself as long as it doesn't interfere with their sitcoms, this shameful period has resurrected itself once again via the Bush Administration. Yet Clooney -- bless his patriotic heart -- wasn't able to resist commenting on the matter, but rather than make awkward declarations from the stage of the Academy Awards ceremony, he elected to wrap his cautionary tale in the context of an absorbing motion picture.

Filming in crisp black and white, Clooney keeps all the action close to the vest: Rarely does the movie stray from the confines of the CBS studios. At times, the laser-beam focus on both the setting and the situation at hand makes the film feel as if it's been sealed inside a Ziploc bag: There's no mention of Richard Nixon, no Julius and Ethel Rosenberg, no Hollywood Ten, certainly no Ronald Reagan, nothing except the grudge match between Murrow and McCarthy. When the movie does wander off to include extraneous moments, they're odd-fitting: A sequence in which Murrow interviews Liberace about whether the pianist will ever get married comes across as a cheap shot meant to appease today's "knowing" audiences.

The movie's stroke of genius, however, is in its masterful integration of actual newsreel footage into the fictionalized framework. No actor was hired to play Joe McCarthy because none was needed: The Senator is entirely represented through archival footage seen on TV screens. Apparently, Clooney felt that no performer could have captured this odious individual, and he may have been right: Watching this oily politician rant and rave from the blocky dimensions of a TV monitor is in itself enough to strike fear into the hearts of upstanding American viewers.

Clooney has his sights set, and the targets are all big game. Like All the President's Men, the movie celebrates journalistic integrity in the face of political corruption, and like Quiz Show, it shows how this marvelous invention that has the ability to educate millions of Americans simultaneously has instead been dumbed down to placate the lowest common denominator (in the grand scheme of things, it didn't take long for Edward R. Murrow to be replaced by Fear Factor and Trading Spouses). And on both fronts, Clooney decries the lack of modern-day heroes who could compare with Murrow and Friendly, media figures who, with the backing of their peers, would be willing and able to take down this insidious and dangerous administration. Who's ready to lead the charge? Frank Rich? Molly Ivins? The guy who created the www.ebolaworld.com website, with its hilarious animated sitcom The George Bush Show (complete with laugh track)? It may not matter: As Clooney's dazzling film suggests, it may take only one individual to curse the darkness, but it requires a support team to maintain the illumination. 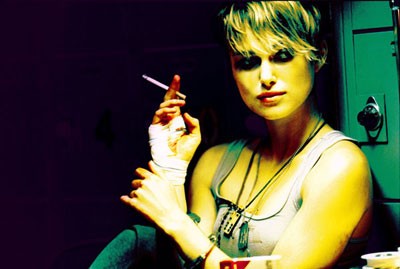 Were someone to make a film version of John Steinbeck's Of Mice and Men with directors essaying the leading roles, the natural fit would be for Ridley Scott to play the intelligent George while his brother Tony Scott portrays the mentally challenged Lenny. For while Ridley has proven himself to be one of the more accomplished helmers of modern times (Blade Runner alone would seal his reputation), younger bro Tony has -- with only a couple of exceptions -- heaped one moronic spectacle after another onto the cinematic scrap heap. He was Michael Bay before Michael Bay came along -- it's no coincidence that both men cut their teeth under the tutelage of soul-free producer Jerry Bruckheimer.

When it comes to unpleasant endeavors, mulling over the worst Tony Scott movie is a task that resides just below removing shower grot. Yet even with a resume littered with the likes of Beverly Hills Cop II and The Last Boy Scout, Domino (*) might be the new king of his cesspool. Armed with the cinematic excesses that made his last picture, Man On Fire, near-unwatchable, Scott this time tackles the based-on-fact saga of Domino Harvey.

By all appearances, Domino led a fascinating life: The daughter of English actor Laurence Harvey (The Manchurian Candidate), this tomboy quickly gave up the lifestyle of the rich and famous to forge her own path as a bounty hunter. That sounds like compelling material for a kick-ass biopic -- for once, it seems that truth is stranger than fiction. But armed with a script inexplicably penned by Richard Kelly (the writer-director of the excellent cult flick Donnie Darko), Scott instead chooses to ignore many of the smaller details of Domino's hard-scrabble existence to fashion an oft-times impenetrable action flick about a trio of bounty hunters involved in a scam that brings together the Mob, frat boys, trailer park trash, two former Beverly Hills 90210 cast members and Mo'Nique as a DMV employee with a dying granddaughter. It's Scott's attempt to make a crime caper as tricked up as, say, Pulp Fiction or Get Shorty, but it's an unholy mess, and it subjugates the character of Domino to such a degree that she ultimately feels like a bit player in her own story.

As the title character, Keira Knightley is required only to snarl on cue, while Mickey Rourke and Edgar Ramirez are equally lifeless as her fellow bounty hunters. Even the patented eccentricity of Christopher Walken, cast as a producer of TV reality shows, isn't powerful enough to overcome the overbearing weight of Scott's garish treatment of this story. Once again, the director has seen fit to camouflage the weakness of the material by going ballistic on the technical side. Yet the visual flourishes of a Tony Scott picture don't provide the same kinetic kick as those from a Martin Scorsese or even Brian DePalma film; instead, the rapid-cut editing, grainy photography and pretentious use of sound (often, the same line is echoed on the soundtrack over and over... and over) generate multiplex migraines, while the ugly color saturation suggests that a crew member upchucked all over the film stock.

The real Domino Harvey died this past June of a drug overdose; she was 35 years old. Yet even here, the movie doesn't play fair, ending only with a written credit that states, "In Loving Memory," as if her final minutes on Earth played out like a Kleenex scene from Steel Magnolias rather than an ugly Janis Joplin moment. But at least Domino the person had 35 years; Domino the movie is strictly DOA. 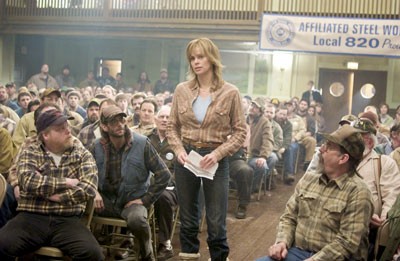 North Country (**1/2) is loosely based on a true story, and it'd be interesting if transcripts from the actual trials surrounding this tale were made available at the film's screenings. That way, we could see for ourselves if the courtroom shenanigans were really as difficult to swallow as the ones that conclude this film.

Up until that point, North Country works fairly well as a raging polemic against sexual harassment in the workplace. Inspired by the United States' first successful sexual harassment lawsuit, the movie stars Charlize Theron as a single mom who returns to her Minnesota hometown and lands a job in the local mines. One of only a handful of women who work there, she has to contend with the incessant torment perpetrated by the yahoos who work alongside her, good ol' boys who don't believe girls have any business laboring in the mines. Tired of the lewd taunts and cruel pranks, she takes the company to court, a decision that alienates her from practically everyone, including the women who abhor their own treatment but refuse to cause waves.

North Country is directed by New Zealand's Niki Caro, and it's surprising to see the talent behind the lyrical Whale Rider at the helm of a movie so rigidly straightforward in its telling. Then again, it does speak well of her willingness to attempt something different, even if the script by Michael Seitzman doesn't allow her many opportunities to test her range. Her primary asset is Charlize Theron, who again demonstrates (as if there was any doubt after Monster) that she's a master thespian residing within a model's body. Such luminaries as Frances McDormand, Sissy Spacek and Woody Harrelson flesh out the supporting cast, but this is Theron's show all the way.

Eventually, there's a sameness to the numerous scenes in which Theron's character is confronted by rampant misogyny, but by then, our own emotions have been riled to the point that we're salivating over the prospect of these creeps receiving their comeuppance. When it occurs, it's a disappointment, arriving within the context of a courtroom sequence that's not only clumsily handled (for starters, a hostile witness has an unbelievable change of heart), but oddly anti-climactic as well. North Country is worth catching for its important issues and Theron's galvanizing performance, but when it comes to sticking up for its shameless last-minute theatrics, the defense rests.