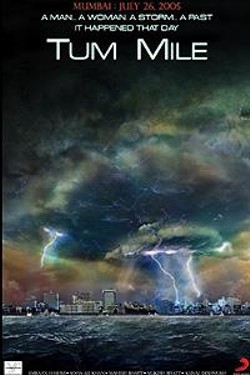 July 26 rings an ominous bell-for most, but amidst all the chaos and the tragedy, it reunited two star crossed ex lovers. Two people who meet after a long hiatus of eight years-now occupying different worlds. What starts off as a seemingly innocuous encounter on the same flight back to Mumbaiends up as a rollercoaster ride through some of the darkest hours of Mumbai as the two see the city get swamped with disaster and loss…and are forced to stick together in this time of crisis. The story continuously shifts perspective between the past and the present. A glorious but crazy past of two starkly different people falling in love, the initial highs of a new romance giving way to the pitfalls of a live in relationship, the constant conflict, the frantic and urgent making up, and finally irreconcilable differences-that give way to a final break up. And an even crazier present- of the awkward yet very palpable tension between two people who have gone through so much together and now struggle to piece together even a single conversation. As they journey through the floods, their guard drops and emotions and insecurities lie bare and the ordeal of that night calls on some important revelations and life lessons for the both of them. What they walk away with and what they leave behind on that fateful night remains to be seen.

Tum Mile is not showing in any theaters in the area.