Two Days, One Night works hard for the money | Reviews | Creative Loafing Charlotte
Switch to the mobile version of this page.

Two Days, One Night works hard for the money 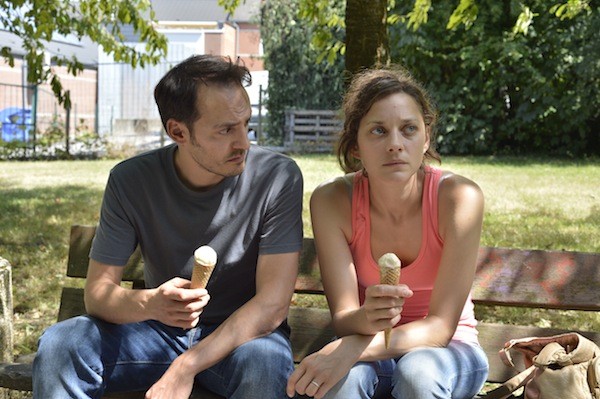 The members of the Academy of Motion Picture Arts & Sciences are batting .500 when it comes to the case of Two Days, One Night, the latest picture from those sibling purveyors of common folk, Jean-Pierre and Luc Dardenne. On one hand, they failed to give the picture an Oscar nomination for Best Foreign Language Film, even though it was in the running as Belgium's official submission. On the other, they did remember to include Marion Cotillard in the Best Actress lineup, a mildly surprising inclusion given that her work was being praised more by film critics than industry insiders.

Both the film and its lead actress are worthy of accolades. Perhaps the best work yet from the Dardennes, this harrowing drama derives most of its power from a knockout performance by Cotillard. She stars as Sandra, a working-class woman who learns that her job has been terminated following her absence due to illness, and that her co-workers will all receive a bonus for their extra efforts. Following her last-minute plea to keep her job, she's then given a task: Over the weekend, she must convince a majority of her co-workers to give up their bonuses so that the money can be used to retain her position. It's a dreadful mission and one that she's reluctant to pursue, but after her husband (Fabrizio Rongione) convinces her it's necessary, she then sets about approaching each person individually, pleading her case and hoping for the best.

Each encounter provides the movie with a steadily building charge, as some people generously agree to forego the bonus, others refuse because they honestly need the money to survive, and yet others refuse simply because they have no sympathy for their fellow sufferers. (It's interesting that the Dardennes revealed in an interview that their inspiration was Twelve Angry Men, another story about a lone person trying to convince others to change their minds.) Cotillard carries the movie beautifully, as her Sandra has to contend not only with the mixed reactions (some quite hostile) of her co-workers but also with her own crippling self-doubt. I won't reveal whether she wins over a majority or not, but that's almost beside the point. What remains with us most is the outrage that ordinary, hard-working people are placed in such an outrageous situation in the first place.