One of the damnedest movies I've seen this summer, Miami Vice (**1/2 out of four) is successful only part of the time and confounding all the way through.

Since his days as a guiding light for the trendsetting TV series from the 1980s, Michael Mann has established himself as an accomplished movie maker with such hits as The Last of the Mohicans, Heat and The Insider. So his decision to bring Miami Vice to the big screen wasn't the act of a desperate has-been eager to recapture some of his former glory. Instead, it was the act of a confident artist certain that he could add something new to the mix.

Mann has revealed himself as a sober, serious filmmaker, so it's no surprise that his film version bears little resemblance to its TV counterpart. There's very little in the way of fashion sense or MTV visuals, surface elements that made the show stand apart from the pack. Mann has instead elected to turn his Vice into something altogether leaner and meaner -- if not necessarily tighter. The movie runs approximately two and a quarter hours, and audiences expecting a zippy action flick will find this bo-o-o-ring indeed. Yet those who can tune into its wavelength will frequently find themselves held captive by its beautifully composed shots, its startling bursts of violence and its baffling narrative segues.

The plot of Miami Vice brings to mind the story of how Raymond Chandler was so confused by the film version of his book The Big Sleep that he (like the rest of us) had no idea who committed one of the murders. Along those lines, one wonders whether Mann himself was able to keep track of all the various plot strands he brings up. In a nutshell, the film centers on Miami cops Sonny Crockett and Ricardo Tubbs (Colin Farrell and Jamie Foxx in the roles played once upon a time by Don Johnson and Philip Michael Thomas) as they travel through the Americas from Miami on down to take care of some particularly nasty drug kingpins. Along the way, Crockett falls for one of the drug outfit's power players (the great Gong Li, here struggling with the English language and often losing), Tubbs racks up some quality time with a fellow enforcer (Naomie Harris), a snitch leaks compromising info to the villains, and in one spectacularly staged sequence, some trailer-park skinheads get theirs in a bloody fashion.

Given the expectations of not only fans of the TV series but also summer movie audiences in general, it would have been so easy for Mann to cash in quick by making a trashy spectacle like Bad Boys II or Con Air. Instead, he tries to add an odd sense of heft to his movie by stripping down his characters until all that's left are archetypes upon which we can hoist all manner of expectations. He views Crockett and Tubbs as nihilistic warriors so embedded in their careers that they only need their weapons, their clipped cop-cliché lingo and each other to survive. There's no back story to any of this: What we see is what we get. Unfortunately, such iconic images are only as good as the movie stars propping them up, and while Foxx and Farrell can glower with the best of them, neither of them possess the weight of personality or aura of invincibility that, say, Clint Eastwood or John Wayne could summon without breaking stride.

This is a movie of extremes: alternately dazzling and deadening, careening between stylish and stultifying, tough going on occasion and smooth sailing the rest of the way. Yet in the final count, it's the virtues that save this Vice.

THERE'S SOMETHING ALMOST touching about Woody Allen's attempts to keep vaudeville alive in this, the 21st century. This ancient form of comedy entertainment would probably have been extinct by now had it not been for the Broadway adaptation of Mel Brooks' The Producers, a smash hit that, tellingly, did not meet with similar success when brought to the movie screen and placed before less charitable filmgoers. But Allen, bless his myopic soul, seems to be functioning in a vacuum, cheerfully unaware that audiences who can turn something like Jackass: The Movie into a hit (with a sequel on its way) would probably rather be clobbered by a bullet train than endure such lines as, "I was born into the Hebrew persuasion, but I soon converted to narcissism," much less listen to a score featuring works by Tchaikovsky and Strauss.

In Scoop (**1/2 out of four), the vaudevillian element is Allen's own character: Sid Waterman, an old-school magician who performs under the name Splendini. Sid reluctantly helps Sondra Pransky (Scarlett Johansson), an American journalism student vacationing in England, follow up a lead on the Tarot Card Killer, a murderer who's been slaughtering London prostitutes. Sondra has been tipped off by newspaperman Joe Strombel (Ian McShane) that the killer is actually British aristocrat Peter Lyman (Hugh Jackman); the reason Joe can't pursue the story himself is because he's already dead, and it was all he could do to escape from the "other side" long enough to provide Sondra with what could turn out to be the scoop of a lifetime. Sondra manages to become acquainted with Peter, and before long they're falling in love, which is great if he's an innocent man and problematic if he really is the Tarot Card Killer.

Last year's Match Point (also London-set, also starring Johansson) earned Allen his best reviews in years, but Scoop finds the writer-director sliding back into his more familiar position these days: a once-great filmmaker now churning out minor works that earn a few positive notices but are mostly met with critical indifference. Scoop, which bares some similarity to Allen's more polished Manhattan Murder Mystery from 1993, is but a trifle, yet it has its modest pleasures. While Johansson, so memorable in Match Point, has unfortunately adopted the Woody-stutter-speech for this latest role (thereby illustrating that she's no Diane Keaton), Allen himself scores some points by having his lowbrow character mingle with the upper crust of British society. And continuing the trend begun in Anything Else, he again casts himself in the role of a hesitant, hands-off mentor rather than as a wrinkled lothario scoring with women young enough to be his granddaughters. That welcome development is alone worth a few positive notices. 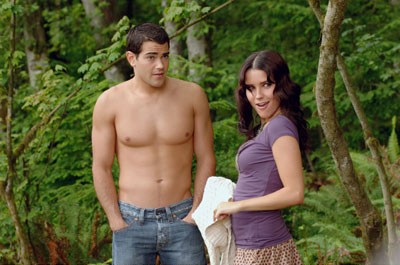 THE BIGGEST PROBLEM with John Tucker Must Die (** out of four) is that it uses Cheap Trick's "I Want You to Want Me" to serve as its anthem for blissed-out teen love -- unfortunate, since the delightful high school comedy 10 Things I Hate About You already went that route, with a far greater return on its investment in Ye Olde Rock Catalogue. Tucker's other mistake is that it never seems to be aiming very high: This is the type of film in which the token adult figure offering words of wisdom to wayward youth is a character played by, uh, Jenny McCarthy.

In other words, even with that title, don't go expecting another Heathers or Election, school satires with the blood-spilling bite of a great white. John Tucker Must Die, directed by I've-rarely-met-a-premise-I-couldn't-neuter Betty Thomas (Doctor Dolittle, I-Spy), is the usual pandering claptrap, centering on the efforts of three high school beauties -- brainy Carrie (Arielle Kebbel), vampy Beth (Sophia Bush) and flippant Heather (Ashanti) -- to get revenge against the stud (Jesse Metcalfe) who's been simultaneously dating all of them. After several failed attempts at meting out just desserts, they decide to break his heart by getting him to fall for wallflower Kate (Brittany Snow, anything but a wallflower) and then having her dump him. Kate agrees to the plan, but matters become messy once she finds herself attracted to both the straight-laced John and his brother Scott (Penn Badgley), who establishes his rebel credentials by sporting long hair and listening to Elvis Costello.

The cast of this painless but forgettable film is primarily populated by fledgling TV stars more adept at modeling than emoting, though a few do garner notice. Bush has a couple of inspired slapstick moments as the vegan activist ("We all know how easy they are," another character cracks), Snow exudes a bit of that Reese Witherspoon pep, and Badgley has that whole Johnny Depp grunge thing going for him -- he even looks enough like the Pirates of the Caribbean star to remain employed as long as producers bark to find them "a Johnny Depp type." But the film's gender politics are woefully confused, and any movie that ends with a cake fight has clearly run out of anything interesting to communicate.

IT USED TO BE Oscar-bait productions that had no trouble snagging the A-listers. Now it's the kiddie flicks that have them lining up to sign on the dotted line.

Unless it's a Pixar or Disney flick -- in which case actors are carefully matched with animated characters who would benefit from their personal styles (can you imagine anyone besides Nathan Lane as The Lion King's Timon; ditto Don Rickles as Toy Story's Mr. Potato Head?) -- it's annoying to see so much talent wasted in the service of so little. And The Ant Bully (*1/2 out of four) has talent to burn: Julia Roberts, Nicolas Cage, Meryl Streep and Paul Giamatti. But as was the case with Bruce Willis in the recent headache inducer Over the Hedge, this is yet another example of hiring big stars for the sole purpose of -- what exactly? Do 10-year-olds really care that acting legend Meryl Streep is voicing the role of the Ant Queen? Wouldn't they rather hear Raven or Christy Romano or one of the other kids' cable TV stars in the part? And why pay the bucks to snag Cage for the role of the Wizard Ant, when he's vocally so flat that the role could have easily been handled by Charlie Sheen or Jim Belushi or somebody else less costly?

No, the problem with this high-powered lineup is that it promises a viewing experience that never materializes. Writer-director John A. Davis' slender screenplay might have well been produced by a committee well-versed in mining the usual kid-friendly clichés. Forget comparisons to Antz or A Bug's Life (both superior to this): The Ant Bully, in which a 10-year-old boy gets shrunk to ant size and learns all about friendship and teamwork from the busy little bugs, is indistinguishable from any other subpar toon flick that mixes bodily function gags with snooze-inducing "lessons" and believes it's being profound and inspirational. Alas, the only thing it inspired in me was a sudden urge to spray the screen with Raid.

DIRECTED BY John A. Davis