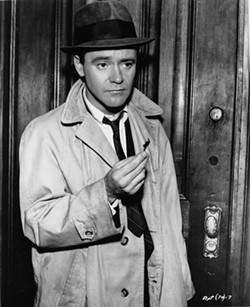 THE APARTMENT (1960). A year after collaborating on the immortal Some Like It Hot, writer-director-producer Billy Wilder, co-writer I.A.L. Diamond and star Jack Lemmon reteamed for another screen gem that attained classic status in about as much time as it takes to comb one's hair. Yet such instant accolades were nothing more than a work of art receiving its proper due, and even 48 years later, this brilliant comedy has lost none of its luster. Lemmon stars as C.C. Baxter, an office underling who finds himself on a career trajectory toward executive status thanks to his compliance in allowing his apartment to be used by company superiors looking for a secluded place to take their mistresses. A bachelor with no friends or lovers, Baxter takes a liking to elevator operator Fran Kubelik (Shirley MacLaine) and is understandably upset when he discovers that she's the latest conquest of company bigwig and married man Jeff Sheldrake (Fred MacMurray). A tender, tentative romance that's also a scathing look at office politics, The Apartment works primarily because of the achingly heartfelt performances by Lemmon and MacLaine. Nominated for 10 Academy Awards, this earned five, including Best Picture, Director and Original Screenplay.

DVD extras include audio commentary by film historian Bruce Block, a making-of documentary, and a short piece on Lemmon.

GOYA'S GHOSTS (2007). Eight years was too long to wait for the next film from the great Milos Forman (Amadeus, Hair, One Flew Over the Cuckoo's Nest), and the fact that Goya's Ghosts isn't better feels like an outright betrayal of our collective patience. Directing his first picture since 1999's underrated Man on the Moon, Forman (who also co-scripted with Jean-Claude Carriere) has crafted a visually stunning but dramatically sloppy drama that kicks off in Madrid at the end of the 18th century, when Brother Lorenzo (Javier Bardem) emerges as a major player in the Spanish Inquisition that led to the torture, imprisonment and (often) deaths of innocents falsely accused of sinning against the Catholic Church. One such victim turns out to be Ines (Natalie Portman), a lovely lass whose refusal of pork at a local tavern (she doesn't like the taste) brands her as a "Judaizer." Stellan Skarsgard is effective as artist Francisco de Goya, who bears witness to the film's events, and it's a pity he doesn't rack up more screen time. Bardem is quietly menacing while Portman earns our sympathy – at least until she's saddled with a second role during the picture's final hour. Indeed, what had been working as a somber study of absolute power corrupting absolutely gets derailed when the story leaps forward 15 years, presenting us with jarring tonal shifts and wallowing in implausible melodrama. The total immersion into the film's staggering production values helps a great deal, but even it can't obscure a storyline that turns so silly, you half-expect Mel Brooks to show up reprising his "Inquisition" musical number from History of the World Part I.

DVD extras include a 2-minute behind-the-scenes featurette (hardly worth the effort) and 14 trailers.

INTO THE WILD (2007). Sean Penn's performances – even the fine ones – can best be described as overwrought, but place the actor behind the camera, and the opposite holds true: As a director, his preference has been for subtlety rather than showboating. Into the Wild finds him turning in his best directorial effort to date; adapting Jon Krakauer's based-on-fact novel, he has fashioned a somber, reflective film about a young man whose actions are so open to interpretation that where some will see an idealist, others will see an obnoxious brat; where some will see a martyr, others will merely see a moron. Emile Hirsch delivers a strong performance as Chris McCandless, a well-to-do college graduate who donates all of his savings to charity and heads for the wilderness. Determined to leave society and all its hypocrisies behind, he treks all over North America's untamed terrain, meeting a wide range of interesting individuals along the way (among them ones played by Oscar-nominated Hal Holbrook and scene-stealing Brian Dierker). Into the Wild is especially memorable in the manner in which it offers no absolutes: Functioning as a bookend piece to Werner Herzog's excellent documentary Grizzly Man, it demonstrates that nature is as beastly as it is beautiful, and even noble aspirations run the risk of getting trampled under its imposing weight. All of the characters have their say, yet even when people's opinions run counter to each other's, everyone is making sense and no one is being disingenuous. Penn obviously feels enormous sympathy for his protagonist, yet he doesn't present him as a saint, only a charismatic if troubled kid whose defining feature is that he managed to live a life less ordinary.

The Collector's Edition doesn't contain much in the way of extra material, yet it's oddly been split up onto two discs; bonuses consist of two making-of pieces totaling 40 minutes and theatrical trailers.