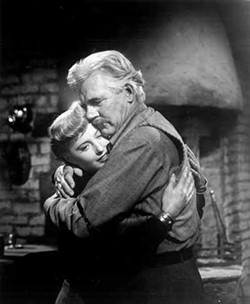 BE KIND REWIND (2008). The premise of Be Kind Rewind is pure Michel Gondry. The end result is anything but. Here's a guy who marches to his own quirky beat (The Science of Sleep, co-writer of Eternal Sunshine of the Spotless Mind), and this picture's plot can be pegged as unfiltered Gondry: After a mishap causes all the videocassettes in a rental store to be erased, a shop employee and his buddy must recreate the movies previously found on those tapes. It's an idea that's pure genius, and with Jack Black and the always welcome Mos Def cast as the hapless amateur filmmakers, all the elements were in place for a no-holds-barred comedy, a hilarious satire that would take no prisoners. So what happened? Instead of dizzying comic heights, the film on view is shockingly tame and lazy, and its most dispiriting aspect is that the movie spoofs take a back seat to a stale storyline about, of all things, the efforts of land developers to raze the video store and erect a shiny new building in its place. The low-budget "remakes" of Ghostbusters and Driving Miss Daisy are amusing, but many other movies are dismissed with merely one line of dialogue; among the casualties are Boogie Nights and Last Tango In Paris – and just think how funny those spoofs might have been had Gondry been true to his comical cajones. Instead, the movie eventually abandons its high-concept angle altogether and spends the laborious last half-hour centered on the attempts of neighborhood residents to save the video shop. Zzzzzz ... Wake me when it's over, and when Gondry again speaks from his warped mind rather than from an overprotective studio's finance department.

DVD extras include a 10-minute behind-the-scenes short and the theatrical trailer.

DEFINITELY, MAYBE (2008). When it comes to a worthy romantic comedy, Definitely, Maybe certainly isn't fool's gold (or Fool's Gold); on the contrary, it's the real deal, a diamond in the rough that could use some polishing but overall sparkles with warmth and wit. Little Miss Sunshine's Abigail Breslin – between this, Nim's Island and the upcoming Kit Kittredge: An American Girl, she's suddenly more overexposed than fellow moppet Dakota Fanning – plays Maya Hayes, a precocious child whose parents are getting divorced. While staying with her father Will (Ryan Reynolds), Maya begs to hear how he and her mother met, so he turns the bedtime story into a mystery, changing all the names and leaving Maya to guess which of the women from his past ended up becoming his wife. As he details his escapades during the early 1990s, as a fledgling political consultant for the Clinton campaign, he presents three possibilities: his college sweetheart Emily (Elizabeth Banks), his campaign co-worker April (Isla Fisher), and his reporter friend Summer (Rachel Weisz). By casting three comparably drop-dead-gorgeous actresses in sympathetic and intelligent roles, writer-director Adam Brooks keeps the mystery going longer than might be expected; still, the focus isn't on the identity of Mom as much as it's on Will's romantic travails as he keeps sorting out his shifting feelings for these women as they repeatedly enter his life over the years. Affable Reynolds manages to keep pace with his gifted leading ladies, while an unbilled Kevin Kline appears as a literary boozehound with an eye for young college girls.

DVD extras include audio commentary by Reynolds and writer-director Adam Brooks, six minutes of deleted scenes, and a making-of featurette.

THE FURIES (1950). Until I watched The Furies a couple of weeks ago, I had honestly forgotten all that chatter about how Daniel Day-Lewis' Oscar-winning performance in There Will Be Blood carried strong echoes of John Huston's work in various movies over the years (including Chinatown). Yet while watching this unorthodox Western, the memory came rushing back thanks to the larger-than-life turn by John's real-life pop, Walter Huston. Day-Lewis' performance seems based more on Walter's turn here than in anything John ever did, starting with the fact that, like Day-Lewis, Huston pere is playing a tyrannical, self-made millionaire (T.C. Jeffords) who rules over everyone around him with little room for charity or sympathy (one character cracks, "If you stop telling people lies about me, I'll stop telling them the truth about you"). It's a juicy turn and, sadly, Huston's last, as he died four months before the picture was released. But the grand finale for Huston marked the beginning of the Western phase of director Anthony Mann's career, as the director would primarily spend the 1950s helming a number of oaters that remain popular today (most notably his collaborations with James Stewart). The lead in this unjustly forgotten drama is typically excellent Barbara Stanwyck, cast as T.C.'s headstrong daughter Vance. She spends the film bucking up against her father on almost every count: sparring with him over the ranch and the surrounding land; romantically involved with the two men he most despises (gambler Wendell Corey and Mexican squatter Gilbert Roland); and taking an instant dislike to the older woman (Judith Anderson) she fears will steal the property away from her. Hardly a formulaic Western, The Furies (incidentally, the name of T.C.'s ranch, although firmly rooted in Greek and Roman mythology) takes several unpredictable turns, some not as successful as others. But minor missteps and a weak-willed performance by Corey (both Stanwyck and Huston devour him alive) fail to break the film's galloping stride, and cinematographer Victor Milner earned his ninth and final Oscar nomination (he won years earlier for Cecil B. DeMille's 1934 take on Cleopatra) for his stark black-and-white camerawork.