By Michael J. Solender @mjsolender
click to flip through (3) 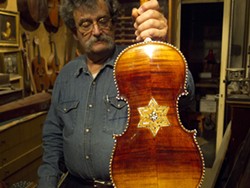 Two generations and thousands of miles from the Nazi concentration camps and East European Jewish ghettos they once occupied, 18 special violins are finding revitalized purpose and inspiring new listeners with their music.

The exhibit headlines a vast cultural and educational initiative involving scores of diverse community partners. Programming that compliments the exhibit will be hosted by Charlotte educational, cultural and faith-based institutions, and includes lectures, panel discussions, theatrical performances, films and concerts. The special programming culminates in a concert performance on Saturday, April 21, by world acclaimed violin virtuoso Shlomo Mintz performing with the Charlotte Symphony and its music director, the noted British violinist Christopher Warren-Green.

Weinstein, a second-generation luthier, provides services to many of the world's most acclaimed violinists, including Mintz and Itzhak Perlman. Almost 20 years ago, Weinstein shared a secret dream with Mintz about his desire to locate and restore Holocaust-era violins as a way to honor the memories of their former owners and the countless other musicians and artists who perished during the calamity.

"I found inspiration in unlocking the stories of these beautiful instruments that for so long lay silent," said Weinstein. "You must realize that in the 1950s, a great number of Jews immigrated to Israel from all over Europe. The German- and Austrian-made violins that accompanied some of these immigrants from the war were often discarded or stored away in attics, ignored because of their provenance or the negative memories associated with them. After a generation, as they began to surface, I wanted to help bring their voice back, to share their stories once again."

As Weinstein made his quest known, violins began appearing at his Tel Aviv atelier in the mid-'80s. Some had unknown origins, bearing only a faded Star of David, revealing little more than their previous owners' religion. Others carried stories of such courage and inspiration, it seemed to Weinstein that divine intervention brought them to him. Such was the case of "Motele's Violin," which the grandson of a Jewish partisan commander in Ukraine during the Nazi occupation brought to Weinstein.

That violin had been the prized possession of 12-year-old Motele Schlein, a boy found by the Jewish partisan fighters in the Ukrainian woods in 1943. The partisans enlisted Motele, whose entire family had been killed by the Nazis, to be a lookout in the village of Ovruch, camouflaged as a beggar boy playing the violin. Soon, Motele was playing inside a pub frequented by Germans, where the talented violinist used his access to smuggle explosives from inside his instrument's case into a crack in a wall of the pub basement, only to detonate them when the bar was filled with members of an SS division.

Weinstein's connection to Jewish partisans has an even closer relationship. He is married to the former Assi Bielski, daughter of Asael Bielski, the second of the three widely recognized and heralded Bielski brothers who led a partisan community of Jewish resistance fighters in the forests of Belarus during the Nazi occupation in World War II. The brothers' story was dramatized in the 2008 film Defiance, starring Daniel Craig.

Last August, Assi Bielski Weinstein visited Charlotte with her cousin Ruth Bielski Ehrreich to promote the Violins of Hope exhibit. Bielski Ehrreich is the daughter of Tuvia Bielski, the oldest of the three brothers who led the partisan community that swelled to more than 1,200 during the war.

Other family members will join the cousins in a panel discussion, "Courage and Compassion: A Family Remembers," to be held at 5:30 p.m. Wednesday, April 18, at the Levine Museum of the New South. The event coincides with the museum's exhibit, Courage and Compassion: The Legacy of the Bielski Brothers, on display through June 3.

Though neither knew it at the time, a chance meeting in 1995 between Weinstein and violin pedagogue David Russell, then teaching at the Cleveland Institute of Music, set the course for the not-yet-established exhibit to make its North American debut in Charlotte some 17 years later.

The two met when Weinstein visited the institute to research the relationship between violin playing and archery. "Amnon was fascinated with the corollary between the two disciplines and how much overlap there was between the physical requirements mastering both," said Russell, now UNCC's Anne R. Belk Distinguished Professor of Music. "We took our best violin students and brought them outside to an archery course. I joined along, though I had never shot before. I was quite surprised at how well I performed and Amnon actually thought I must be the archery instructor. Of course, a great friendship ensued."

At Weinstein's encouragement, Russell joined the faculty at Keshet Eilon, Israel's renowned music center and violin master course, and became aware of his passion for restoring the Holocaust-era violins. Russell planted the seeds with Weinstein to bring the exhibit to the U.S. when appropriate, and he credits Ken Lambla, the dean of UNCC's College of Arts & Architecture, with the vision and drive to make it a reality.

"The support from Dean Lambla, the university, and all our partners has really made this more special than I could have dreamt of," Russell said. "The project speaks very optimistically to the future of culture in Charlotte. There are many lessons here, not the least of which is that art can be important and can carry a nobility of ideas. There can be a real power in art and music."

These violins, now restored to their former glory, will let the music tell their powerful stories for generations to come.

For a complete schedule of events and performances for Violins of Hope, go to http://violinsofhopecharlotte.com.