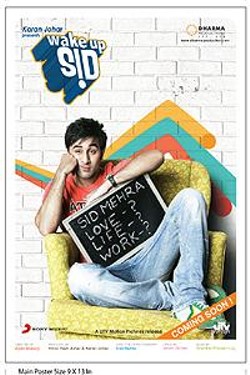 This is the story of Sidharth Mehra, a lazy, unmotivated slacker from Mumbai whose life undergoes a series of changes after taking his final year college exams. Sid's world is breezy, carefree, and without any true responsibilities. The most important elements in his life are his friends, his camera, his car, and his X-box 360. Sid thrives around his two best friends, Rishi and Laxmi, very rarely communicates with his mother Sarita and takes his father Ram Mehra, and all his hard earned wealth for granted. Despite all these traits, Sid is an honest boy; sweet, funny, and above all, a good friend. Aisha Bannerjee, an aspiring writer from Calcutta, learns this soon enough when her path crosses with Sid's on her first day in Bombay, Ambitious, well-read, and driven, Aisha has come to Bombay to realize her dreams as a writer. Despite their contrasting personalities. Sid becomes Aisha's first friend in the city.

As Aisha sets up her life in Bombay, with the help of Sid and his gang, Sid allows for time to fly by over long drives, parties that stretch well into dawn, and endless hours doing absolutely nothing. But summers vary rarely dull these days and Sid's summer is no different. A series of circumstances and events compel him to take stock of his life and take a hard look at himself. Will he, at some point figure out what he's supposed to be doing with his life?

Wake Up Sid is not showing in any theaters in the area.