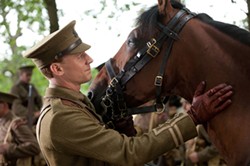 Steven Spielberg is no novice when it comes to presenting moviegoers with the horrors of war, whether it's the muted screams of Schindler's List, the frontline carnage of Saving Private Ryan or even the knotty retaliations of Munich. While all those films deservedly earned R ratings, don't be fooled into thinking the PG-13 War Horse takes a softer approach to the subject at hand — with one specific scene, Spielberg establishes that his World War I epic, like some of the platoons marching through it, won't take any prisoners.

Before that sequence arrives, we're introduced to the majestic title animal, a horse (named Joey) who bonds with youthful farmhand Albert (Jeremy Irvine) before being sold to the British army. A sensitive captain (Tom Hiddleston) promises Albert that he'll take good care of Joey, but the horse doesn't remain in the officer's hands; instead, Joey finds himself passing between soldiers and civilians, between Brits and Germans, between kindly souls and abusive monsters. A young girl offers him a home; a German officer plans to work him until he drops dead; soldiers from each side team up to save him. And so it goes.

Based on the smash stage hit, War Horse has been opened up in breathtaking fashion for the screen, vibrantly bringing each vignette to life and allowing them to collectively address how war diminishes not just humankind but irrevocably destroys surrounding environs. War Horse is a movie of rage, but it's also one of empathy and understanding — it's to Spielberg's credit that he knows the story line is emotionally wrenching enough that he doesn't need to manipulate tears out of anyone (believe you me, many viewers won't need any coaxing to reach for those hankies at the appropriate moments). Only with the final shot selections does the director succumb to the sort of artistic grandstanding that's sometimes in his nature, but these screensaver images hardly negate the power and the fury of the hard-charging movie that precedes them.