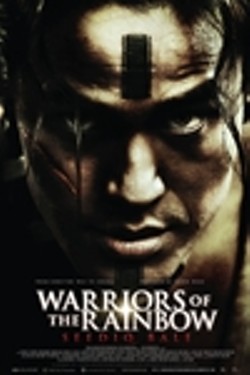 Warriors of the Rainbow: Seediq Bale

With a cast of fifteen thousand and billed as the most expensive film in the history of Taiwanese cinema, Warriors of the Rainbow: Seediq Bale recounts an extraordinary though little known historical event from the 20th-century. During the 50-year long Japanese occupation of Taiwan, the remnants of the aboriginal tribes who first settled in the island lived in the central Taiwanese mountains. After decades of indignities, Mouna Rudo (Lin Ching-Tai), the fierce leader of one of the Seediq tribes, forges a coalition with other tribal leaders and plots a spectacular rebellion against the Japanese colonizers. On the Academy Awards' shortlist for Best Foreign Language Feature, this epic film sheds light on the Seediq's struggle to preserve their land and way of life.

Warriors of the Rainbow: Seediq Bale is not showing in any theaters in the area.