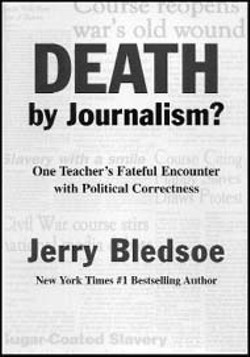 When you open your newspaper in the morning, you are, whether you think about it or not, entering into an agreement -- an agreement based on trust. You trust that the writers and editors did their jobs and are reporting the news fairly and accurately.

Death by Journalism?, Jerry Bledsoe's new book, tells how a breach of that implicit trust affected a community and possibly hastened the death of one of the principal subjects. And it raises complicated issues related to freedom of speech and freedom of the press.

It sounds so simple: A 10 week continuing education course taught at a community college about the Civil War in North Carolina. What followed, however, was anything but simple.

Here are the basics: Jack Perdue, a real estate appraiser and well-known amateur historian, was approached to teach a class at Randolph Community College. Perdue, an avid genealogist, had been instrumental in organizing The Historic Jamestown Commission and an historic properties commission in Guilford County. He was also an active member of the Sons of Confederate Veterans (SCV).

Here is where the complications start. By all accounts, Perdue was an intelligent, honorable man and a good friend to many people. He is on record condemning slavery, but he also had expressed strong feelings supporting the use of the Confederate battle flag and the preservation of Southern heritage.

Community college courses like this are usually called hobby or personal interest courses and are paid for by the fees from the students who sign up. In this case, the SCV "camp" in Randolph County to which Perdue belonged co-sponsored the course. Some members of the camp who had special interests (uniforms, weapons, etc) served as guest lecturers. Perdue also invited other outside specialists to lecture, including newspaperman Bob Zeller, a leading private collector of Civil War photography, and Rick McCaslin, a history professor who had published two books on the Civil War. The proposal for the class was approved, advertised openly with other classes, and 11 students signed up.

Feinsilver showed up a half hour or so into the first session of the course in September and approached Jack Perdue at the break with a few questions. He also requested a copy of a course outline, which Perdue gave him. Feinsilver eventually came to the class three times.

The story Feinsilver subsequently wrote appeared on Sunday, November 15, 1998. In the first paragraph, Feinsilver wrote that the course "teaches that most black people were happy under slavery" and "that tens of thousands of black men fought for the Confederacy because they believed in the Southern cause." The second paragraph cites unnamed Southern history experts who "are calling the teaching 'pseudo-history' and pro-Confederate 'propaganda.'"

Perdue, his students, the college administration and others were astounded at the tone and the amount of misinformation in the story.

Bledsoe, who wrote for the News & Record for many years and still lives in the area, heard about the controversy, and decided to look into it.

Bledsoe's investigation showed Feinsilver's story was riddled with what can only be called sloppy reporting -- exacerbated by sloppy editing. Examples include misspelling the names of some of the principle people he talked to as well as getting their titles wrong. A number of people Feinsilver interviewed, including several who took the class, say they were misquoted or never said things Feinsilver attributed to them.

In addition, videotapes of the classes show that neither Perdue nor any guest lecturers taught that "slaves were happy." Nevertheless, it was this last point that the national and international media jumped on.

News organizations and columnists across the country, and just about anyone with a forum, denounced Perdue and RCC for offering such a course.

The backlash was so great, RCC president Larry Linker eventually decided, after postponing the last class meeting, to cancel the class. Then, of course, there was another backlash against Linker for cancelling the class.

In the midst of all of this, the instructor, Jack Perdue, died. Did the strain of the media attention and the controversy hasten Jack Perdue's heart attack?

Throughout the controversy, the editors and managers at Greensboro's News & Record have said they stand by the story and Feinsilver's reporting, despite the numerous eyewitnesses -- not to mention videos of the classes -- which contradict the harmful story. Sources in the newsroom told Bledsoe that Feinsilver was put on probation for six months and then resigned on the day his probation was up. He declined to be interviewed for the book.

Bledsoe's account left me horrified and sad. First, the breach of trust between writer and reader was broken, not to mention the challenges to freedom of speech and freedom of the press. On a personal level, I felt ashamed of my own Southern heritage and my chosen profession. Then I was angry about feeling that way.

It's very possible this controversy was created by a bored, inexperienced reporter trying to get some attention from his bosses, or at least make a name for himself.

Young reporters like Feinsilver are common. They've usually just graduated from college and taken a job at a small daily newspaper -- the training ground for most reporters. They're also inexperienced and frustrated that they can't write or investigate the "Big Stories" right away. The Greensboro News & Record assigned Feinsilver to a bureau -- also frequent training grounds for young reporters. A newspaper will set up a small one- or two-person office in a neighboring county or community, with an ad salesperson and reporter. The idea is that the reporter will get out of the office and get to know the community. When you're young and ambitious, it can seem like a premature end to your journalism career.

Reporters are human. We do make mistakes. We have beliefs, experiences and prejudices that help us relate to our audience, and doggedly pursue the investigation of a topic, sometimes far beyond the call of duty. It's that sense of duty and the search for the truth, as corny as it sounds, that makes the best of us check and recheck facts and quotes. It's what made Woodward and Bernstein follow the twisted trail of the Watergate burglars. It's what made Charlie Shepard and others before him at the Observer continue to investigate Jim Bakker and PTL. It's what made Jerry Bledsoe tell this story. *