A little rock, a little billy and a whole lot of fun QC after dark 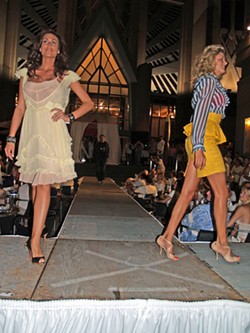 Cason is back with a brand new edition ... just like Vanilla Ice. Old School Ice was on hand at the grand opening of the new addition to Concord's nightlife, ML Nightclub. Now, Ice may not truly be back with a brand new bag, but Amos' SouthEnd certainly is. Those large metal doors are back open, finally; I feared Charlotte was at risk of losing one of its finest live music venues. ATL artist Angie Aparo played the stage on Amos' reopening night.

Two Saturdays ago, I attended Creative Loafing's Field Day, sporting a sponge finger to cheer on my team as they ran a victory flag through the dodgeball field. Loaf! Loaf! Loaf! (Join in.) Ever notice how adult relay activities that require things such as passing a ball from one person to another without using hands or handling a greasy watermelon tend to result in fully-dressed Kama Sutra positions? But the only place I was racing to was the arena to see my favorite artist of all time, Tim McGraw, accompanied by ol' Faithful (Faith Hill, if you will).

I, along with my best friend, danced until the stars went blue, then rode a bull named Foo Man Choo, and took my red ragtop down to where the green grass grows (a special for TimHeads like me and all those filling the arena to the brim). The tickets Casey got five minutes after they went on sale made our nose bleed; I didn't need to be close enough to touch Tim, but it would've been nice to be close enough to be able to tell that it was really him. Meanwhile, Nine Inch Nails were playing back in Concord. I wonder how many people had trouble deciding which concert to go to that night.

Speaking of rock and billy, I also checked out the Rockabilly BBQ, a car show with a side of rock & roll and some swing dancing sprinkled on top. There were guitars and hot rods, but I was most excited about Charlotte Swing Dance Society's presence at the event. On hand to represent for the rockabilly music era were bands from all over the country, our favorite local boys Drat, as well as the Flat Tires, Motorbilly and Throttle Kings from Salisbury.

Hump Day was spent at Elevate magazine's Simply White Party at Hearst Tower, an event that benefited both Kids First of the Carolinas and Charlotte party goers with a fashion show and a dress code that would make even Paris Hilton look innocent (all white). And last Saturday, I went to the Juneteenth Festival of the Carolinas, which was more like a stroll through my previous neighborhood, NYC's St. Mark's and Astor Place, where street vendors were selling bootleg movies and Coach bags. But more importantly, they were giving away scholarships and celebrating culture. The unsigned artist segment resembled Lil Jon karaoke, but fortunately the evening promised quality beats by Boondox/Hitsquad recording artists promoted by erstwhile EPMD-er Parrish.

The Bachelor auditions in Charlotte, and no I didn't audition ... the Tony Award Party at the Blumenthal's Booth Playhouse ... Shakira's Hips for Trips contest at NV Lounge ... Dixie's Tavern Rock-N-Roll Lingerie Party with slinky hotties and infamous escorts including the kicker for the Pittsburgh Steelers, Jeff Reed (um, go Panthers!) ... NODA's Neighborhood Theatre: the Recycled Prom, which was a vintage-themed prom sans chaperones, where drinking and dancing were required behaviors.

Next places I'll see you: the Maxim Party on Thursday, June 22 at CenterStage in NODA (hands down the craziest party of the year, and you're hearing this from a girl who use to work for Maxim) ... RDS Events' Bust-A-Move Booze Cruise the following night... Oysterfest at Dixie's Tavern with Simplified and Cowboy Mouth on Saturday ... WWE at the arena on Sunday, June 25. And while you're at it, go ahead and mark your calendars for the Red, White and Blue party at the Sunset Club on July 8th.

Psssstttt ... if you have any dirt or inside scoop on nightlife, shoot me an e-mail at brittney.cason@creativeloafing.com.