Who Stole the Soul?

Touring trio of Beyonce, Keys and Elliott taking R&B back 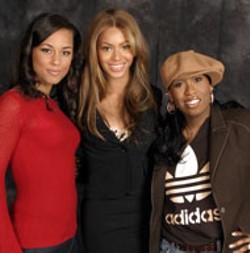 "I used to think that I could not go on / And life was nothing but an awful song"
--from "I Believe I Can Fly" by R. Kelly

Never mind the pedophilia allegations. Put aside for a second his absurd assertion that "Osama bin Laden is the only one who knows exactly what I'm going through." Forgive even his Prince-like battles between faith and flesh, played out in song (after song, after song). Forgive and forget all that. R. Kelly is his name, and he and others like him killed Soul music as we know it.

Kelly's vision of the road to heaven is much like many others in the R&B world: paved with gold. However, it seems he's missing the point of the metaphor, which is that the journey is everything. Like too many of his contemporaries, R. Kelly is stuck on a dead-end street, his songs lost in the fools' gold of materialism and empty sex.

The original Soul was largely made up of two key building blocks -- Black Gospel and Blues. The Blues, of course, mainly concerned itself with earthly desires, while Gospel looked towards heaven for its cues. Simply put, today's soul is all worldly, with little if anything heavenly about it -- on any level.

There is hope, however, in the form of a new wave of female talents like Beyonce, Erykah Badu, and Alicia Keys (Beyonce and Keys are in town this week with Missy Elliott -- more on them later). But for the last 20 years or so, as James Brown once sang, Soul music has been a man's, man's, man's world.

To hear most people tell it, Soul was born in Memphis, Tennessee, a nexus for undiluted Blues and Gospel music. It was here that the legendary Stax Records got its start. From Memphis -- and later, Detroit, home of the legendary Motown -- soul music spread like wildfire into major urban centers throughout the country.

Often, individual cities then developed their own take. Philly Soul, a hybrid that gained much of its identity from the Gamble and Huff songwriting team, is a grand example of this. Taking cues from the undeniable grooves of early Stax/Volt and Hi Records, Philly Soul added strings, horns and dense, lush arrangements to the mix. Smoother and slicker than what had come before, the highly produced, beat-heavy sound paved the way for the studio constructions of late-70s disco and the "urban contemporary" R&B to come.

At some point -- and with the notable exception of someone like Luther Vandross, who's something of an "old Soul" anyway -- classic soul men like Bobby Womack, Teddy Pendergrass, and Marvin Gaye faded away (at least on the popular charts), rendered obsolete by the music they themselves helped create, if unwittingly.

Weaned equally on the soul records they grew up with and on the burgeoning genre of hip-hop, younger artists like Keith Sweat became the norm. Sweat's voice wasn't anything amazing, just your garden-variety horny bleat that traded in seduction for out-and-out begging. The key? It (New Jack) swung like mad, often incorporating hip-hop beats in place of the grooves of old. These artists' popularity was with the record-buying, expendable income, hip-hop set, and so labels everywhere jumped on board. Soon enough, when someone like Bobby Brown called himself "The King of R&B," the hip-hop set was likely to agree, as were the grinning record company executives.

In the early 90s, acts like Jodeci and Boyz II Men soon ruled the popular music world, and -- while not in the category of a Sam Cooke or Ray Charles -- returned the music to a focus on singing rather than sexual pleading. Even after millions of records sold, they too were soon to slip quietly off the charts, replaced by a hip-hop/Soul hybrid, which usually consisted of a pretty young thing singing verses while a gravelly-voiced rapper grumbled a "sensitive thug" chorus.

There's a sea change happening, however. Female performers like Floetry and India.Arie have sold surprisingly well, and the upstart neo-Soul label Hidden Beach has grown rapidly over the last couple of years thanks to "conscious" artists like Jill Scott.

However, if the tide is truly to turn in the popular music world, it's going to take a few popular performers making a sea of cash. After all, imitation is the sincerest form of flattery, and no one knows this as well as the music industry.

Elliott -- besides putting out great party records at a Prince-like clip -- has a heart of Soul, even as her music says hip-hop. Having helped herself, she is now at the point in her career where she wants to help the music. On her newest record, This is Not a Test! she rhymes that it's alright "If you don't got a gun/If you're makin' legal money /...And your wheels don't spin/And you gotta wear them jeans again."

Beyonce -- now omnipresent enough to just go by her first name -- also shows signs of artistic growth. Indeed, her "Crazy in Love" (along with OutKast's "Hey Ya!") was the crossover record of last year, filling the iPods of more than a few thousand would-be hipsters who were defenseless against that song's undeniable rolling punch. And why not? It was playful, it swung, and she sang the hell out of it.

Alicia Keys' mentor, Clive Davis, surmised correctly that people -- especially Grammy voters who remembered the real thing -- would go gaga over the Soul-soaked Keys, who not only sang her own songs but even played a (decent enough) piano for accompaniment. After her Grammy haul, Keys unlocked a previously untapped audience for neo-Soul, and now has the multi-platinum records to show for it.

While not necessarily Soul proper, the sheer fact that this trio have joined together for what is likely one of the most anticipated tours of the year is cause enough for celebration. It's also a boon to those who like their R&B to stand for something other than Riches and Booty.

Perhaps the greatest pure Soul artist of his time, Marvin Gaye, was too busy laying his heart on the line to simply pen a laundry list of luxury items he could offer his gal. Nor did he exclusively sing about getting inside his woman's pants, even though his appetite for the female sex was legendary.

Put another way, Gaye was equally interested in "what's goin' on" -- see "Save the Children" -- as he was in what was coming off.

And that's one charge R. Kelly will never be able to beat.