Because the school board's too busy ripping each other apart 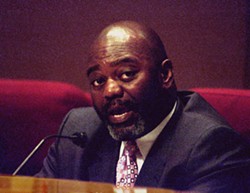 Charlotte-Mecklenburg School Board member Kaye McGarry is so afraid of fellow school board member George Dunlap that she says she wants a security guard stationed in the room during closed session meetings.

To some people, that seems a bit extreme, but to former school board member Lyndalyn Kakadelis, it makes sense. Kakadelis says she, too, feared Dunlap when she was a member of the school board. After a particularly heated, racially oriented debate over the school desegregation lawsuit in 1997, Dunlap came after her and had to be restrained, she says.

It's part of a long pattern of alleged personal and racial harassment among black and white school board members with clashing views, those involved say.

Until now, both sides claim, these clashes have largely taken place at meetings closed to the public. Kakadelis says she had no intention of publicly sharing the details of her 1997 incident with Dunlap until McGarry told her story.

McGarry claims that in April, Dunlap got aggressive after a debate on school discipline, pointing his finger at her and yelling in a physically menacing way with his face a few inches from hers.

Larry Gauvreau was the only other school board member in the room with them at the time.

"I saw George inches away from Kaye's face with his finger in the air," says Gauvreau. "It was threatening. He kept going at it. I started to go over there because I thought he was going to do something. Then she walked away."

McGarry's story is similar to Kakadelis'. Kakadelis says she was pounding her fist on the desk for emphasis while she spoke, and Dunlap told her to stop. When she refused, Kakadelis says, Dunlap lunged at her, knocking his chair over in the process and towered over her, yelling.

"Normally when a man gets that close to my face, it's to kiss me," she says. Former school board chairperson Arthur Griffin had to restrain Dunlap and pull him away, Kakadelis says.

Former school board member John Lassiter, who now serves on city council, was at the meeting, which was closed to the public.

"I witnessed it," Lassiter says. "It was one of many tough discussions we had. She was trying to get her point across and George didn't want to hear it. He looked clearly to be physically intimidating and I think if Arthur had not interfered, there could have been physical contact."

McGarry initially chose not to go public about the April incident and instead wrote Dunlap a letter. "I will absolutely not tolerate this type of behavior in the future," McGarry wrote.

But after another heated debate last month, McGarry exploded in a meeting, claiming Dunlap had called her "sweetheart" while making a snide comment.

The audio tape of the meeting didn't pick up Dunlap's alleged comment. All that can be heard is McGarry's reaction. On the tape, another school board member is speaking when McGarry yells, "That was harassment. Board attorney, Mr. Greene, will you please take note of that? No one calls me 'sweetheart' in an open public meeting."

Board chairperson Joe White can then be heard chastising McGarry for speaking out of order. White then said he hadn't heard Dunlap's remark.

"That's because you have a hearing aid," McGarry fired back.

"I'm going to ignore that," he said. "I might consider that age discrimination, but I won't go there."

The school board later voted against McGarry's request to have a security guard in closed session meetings. In a recent meeting, McGarry says, she kept a canister of tear gas on her desk for protection. She has said that she would not attend another closed session board meeting until she feels she is safe.

At a meeting last week, Dunlap had a few words for her, too.

"No one, regardless of whose district they are in, is going to challenge my manhood," he said. "Truth has a way of rising above the lies."

Gauvreau says both he and McGarry, who are white and often advocates for the suburbs, have been racially harassed for years by the board's African American members in closed session meetings, which are not tape-recorded. At one point a few years ago, Gauvreau claims, the board's other African American member, Vilma Leake, threatened to "cut" him. He didn't take her seriously, he says.

"Vilma's remarks to me are constant," says Gauvreau. "What George and Vilma have done to Kaye McGarry and I is way over the line. She has called me names I would punish my children for. I tolerated it. Kaye had the courage to say I am not going to put up with it any more. The public wouldn't believe what has gone on when it is buried in back offices."

Because of this, Gauvreau says he has made motions to get what is said in closed session recorded, but the motions were defeated by other school board members.

Leake says Gauvreau and McGarry are lying and that no one else heard Dunlap call McGarry "sweetheart."

"I don't know if it is something she is imagining," Leake says.

Leake is outraged by Gauvreau's claim she threatened to "cut" him.

"Oh God, I'm scared of him the way he calls me a pig," says Leake. "I'm appalled that he said that. I don't care when it was, he should have brought charges against me. I feel like bringing charges against him for lying."

Leake says the recent accusations against Dunlap have reminded her of the infamous lynching of Emmett Till, a 14-year-old boy who was brutally murdered for flirting with a white woman in Mississippi.

"These are some of the most racist people I have ever seen," Leake says. "I guess he didn't tell you he told me I was crazy and stupid. I'm sick of them because they are notorious liars and they intend to destroy education in this community. I've done nothing to hurt anybody."

Gauvreu says it was Leake who called him crazy and stupid, but that he has never taken her too seriously because he can "usually have her laughing with me a few minutes later."